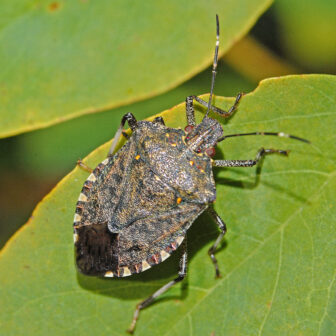 It’s October, and the stink bugs are moving into my house for the winter. They’re hanging onto window screens, hiding in dark corners, and crawling ponderously around the bathtub. And woe unto you if you squash one. Last week, a stink bug was hiding in my washcloth, though I didn’t know it, so I ran hot water over it and rubbed it around on my face. It was a memorable experience for both of us. Let me just say this – it’ll never be popular as a men’s fragrance.

Most of the stink bugs I see are brown marmorated stink bugs (see the photo), which were accidentally brought to the United States in the 1990s. These animals are major pests, causing millions of dollars of damage each year to apples, berries, corn, and other crops.

Stink bugs move into our houses in the fall because they’re looking for a cozy place to spend the winter. If it weren’t for your house, they’d probably overwinter in a nice woodpile or under the bark of a tree. They think your house is the biggest, coziest woodpile they’ve ever seen, so they arrive in droves – 26,205 stink bugs moved into one house in Maryland. And they’re not the only animals hoping to spend the winter in our houses. Fall is a big time for house mice and other rodents to turn up in attics, pantries and basements, and sometimes ladybugs can show up by the hundreds.

But of course the big thing about stink bugs is their smell; after all, “stink” is right there in their name. (And I like to imagine that they have appropriate individual names like Thomas the Vile, Lawrence the Pungent, and Carlotta the Revolting.) Stink bugs smell bad to repel predators. There are plenty of other examples of this sort of thing – opossums, garter snakes, and millipedes all emit distasteful odors when bothered, for instance. Of course, the outstanding local example of an animal with a stinky defense is the skunk, whose pungent odor even our poor human noses can detect from blocks away. For a dog, whose nose is something like 10,000 times more sensitive than ours, being sprayed by a skunk must be like being hit with a flashbang grenade.

So many things stink in a deliberate attempt to be repulsive. Other things stink to be attractive, but because they’re not trying to attract us, we may not like their aromas. A few years ago, October rains brought up three kinds of stinkhorns in my front garden, including the wonderfully named “stinky squid” (see the photo). Stinkhorns are mushrooms easily recognized by their foul odors and their bizarre and sometimes X-rated shapes (no, I’m not going to describe them to you – go look them up for yourself). Stinkhorns use their odors (“like fresh pig manure”, “like cat feces”, “carrion-like”) to attract insects to disperse their spores. If these odors don’t appeal to you, too bad – it’s not you that the mushrooms are trying to impress. 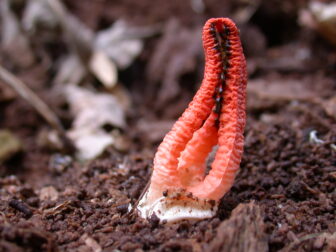 In some cases, such “attractive” odors are very revolting to us. “Corpse flowers” or “carrion flowers” produce the fragrance of rotting meat to attract the flies and beetles that pollinate them. This smell can be powerful and very unpleasant. My brother’s college roommate had one of these strange plants, which over a period of weeks produced a larger and larger flower bud. When the bud finally opened, the smell was so bad that they immediately moved the plant out of the room (and you know that it must have been really bad if a couple of male college students thought that it was too repulsive to keep in their dorm room).

To make the flower even more attractive to insects, it may look as well as smell like a piece of decaying meat (see the photo). Some species even heat their flowers up to human body temperature to help spread their delightful fragrance. So, surprisingly, some of the stinkiest smells in the natural world are designed to attract, not repel. 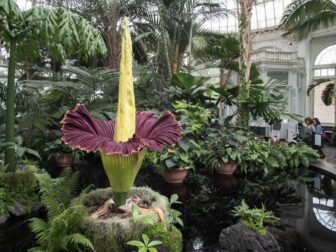 The spectacular and vile-smelling corpse flower, Amorphophallus titanium. Note the absence of human visitors in its immediate vicinity. Image: Rhododendrites, via Wikipedia Commons

Fall can be a time of interesting aromas as well as beautiful sights. By all means enjoy your favorite smells of autumn – pumpkin spice, burning leaves, mulled cider, and that last rose of summer. But maybe take the opportunity this October to have a little olfactory adventure too – take a little whiff of a black walnut husk (citrusy), sassafras leaf (lemon-tropical), spicebush leaf (well, spicy), or even a stink bug or a stinkhorn, to broaden your sensory experience. And look twice before using your washcloth.