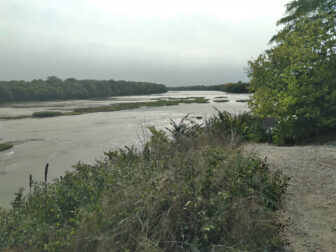 Rapids of the Maumee River, Ohio, near the far northern edge of South America. Photo by Dave Strayer

How we name things affects how we think about them. We name fields, and forests, and marshes, and streams as separate things, so we tend to think of them as separate things. But separating these habitats in our vocabulary and in our minds obscures the innumerable connections that bind these habitats into a single working landscape. Streams are especially well connected to other habitats, in ways both obvious and subtle.

Here in Michigan, calcium-rich minerals beneath the soil surface, and the farm fields and cities on the land’s surface, supply our streams with the calcium that nourishes shellfish and the nitrogen and phosphorus that nourish algae. If we somehow were able to sever all of the connections between the land and the stream, the stream would dry up and disappear. And when we changed the character of the land by replacing forests and marshes with farm fields and cities, we changed the character of our streams. These are obvious connections between streams and the surrounding landscape.

But connections can be far more subtle and wide-ranging, a point that was brought home to me one September day a few years ago when I was fishing at Weirs Rapids on the Maumee River. These rapids are packed with the larvae of net-spinning caddisflies, which were emerging that day, the air alive with fluttering gray moths. Somehow, the migrating purple martins and nighthawks had gotten word, and the air was full of birds. I am used to seeing one or two nighthawks on summer evenings, high overhead. Here there were perhaps 50 birds, swooping and slicing through the air just a few feet above the water. I can’t even guess at the number of martins, but there must have been hundreds or even thousands of them, often close enough (but not slow enough!) to touch. I’ve never been in the midst of a great flock of birds like that, and it’s hard for me to describe the wonderful sensation. The only comparison that I can make is that it felt a little like swimming with a big school of fish on a coral reef.

So here is a connection that runs uphill from the stream back into the surrounding landscape – the river is feeding the birds. But there is yet another connection here. The martins and nighthawks are gorging on Maumee River caddisflies to fuel their long migration south. This is a long-distance connection indeed; martins winter in Brazil, Bolivia, and Peru, and nighthawks winter in Argentina. As improbable as it may seem, this muddy river running through the flat Ohio farmland is directly connected to the Amazon rainforest and Argentine pampas. You could even think of Weirs Rapids as being a far-flung outlying district of South America.

I go back to Weirs Rapids every September hoping to see those flocks of migrating birds, but I’ve never gotten the timing right, and I guess I won’t see them again. But it’s easy to see other, less spectacular, examples of how the stream and its surroundings feed one another. All summer, you can see cedar waxwings and bats flying over streams and rivers, hawking insects. Spiders build their webs on streamside branches to capture the insects that escape from the birds. In turn, fish are alert to grasshoppers, ants, and beetles that fall into the water, and grow fat on these meals supplied by the surrounding land. In the fall, streamside trees supply additional food in the form of leaf-fall, which fuels the stream food web for many months afterward. There is no separating streams from their landscapes.

These connections complicate how we manage our world.  We have to be careful about breaking connections that link different habitats. When we remove streamside vegetation and replace it with lawn or soybeans, we rob food and cooling shade from the stream’s inhabitants, and make it harder for terrestrial predators to forage for emerging stream insects. When we build streamside barriers like walls or steep embankments, we make it difficult for animals like turtles and raccoons to get what they need from both the stream and the land. Such activities can weaken the links between the stream and its landscape, to the detriment of both.

Long-range connections matter, too. If we want to keep Lake Erie from filling up with toxic algae, we need to watch how we manage cornfields many miles away, far out of sight of the lake or indeed any stream. Protecting “our” songbirds means protecting habitats in Michigan, South America, and everywhere in between. Successful management of our natural resources will challenge us to think beyond the artificial boundaries imposed by our language, our politics, and our minds.