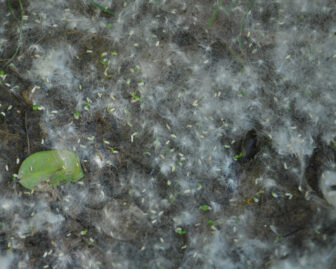 Cottonwood seeds, almost all of which will die by the end of their first year. Image: G. Edward Johnson, via Wikipedia

T.S. Eliot knew what he was doing when he wrote that:

“April is the cruellest month, breeding

Lilacs out of the dead land, mixing

But you could also make the case that June, not April, is the cruelest of months. All through the spring, baby fish hatch and laze in the sun-warmed shallows, bird chicks take their first wobbly flights, bunnies get their first taste of the greens in my garden and seedlings sprout and reach for the sky.

And then they die.

Predatory fish slash through the shallows. When April’s young fish grow large enough to attract the attention of herons and kingfishers, death comes from above, too. Little fish are trapped in drying floodwater pools. Baby birds die when the weather turns cold and rainy or are plucked from their wobbly flights by sharp-shinned hawks. House cats find rabbit nests and drag out the bunnies one-by-one until they’re all gone. SUVs run over half-grown rabbits. Newly sprouted plants that aren’t eaten by slugs or beetles or rabbits wither and die in the first hot spell. Then blight comes for the survivors.

These deaths are driven by the heartless arithmetic of population balance, which demands that deaths balance births. If nature were even a little kindhearted, and allowed a few more baby birds to survive, each year there would be a few more birds, and it wouldn’t be long before we were up to our necks in chickadees. So, if you make a lot of babies, a lot of babies must die.

Whether Death calls only rarely or is a daily visitor depends greatly on how many babies are produced, which we biologists call “fecundity.” Fecundity varies enormously across species, from species like humans (the average woman in the US has about two children over her lifetime), to very fecund species like cottonwoods (which can make millions of seeds each year for decades), fishes like walleyes (hundreds of thousands of eggs over a female’s life), or freshwater mussels (tens of thousands to hundreds of millions of eggs over a female’s life).

There is necessarily a correspondingly wide range in mortality across species. Here in the United States, about 99% of human babies reach adulthood. In contrast, something like 0.001% of walleye eggs and 0.000001% of cottonwood seeds will grow up to become adults. Most of these deaths occur in the earliest months of life, so for the many spring-breeding species, the slaughter of April’s innocents is well underway by June.

Another big difference between species is the amount of care that parents can devote to their offspring. You may know how hard it is to roust just one or two kids out of bed, and get them dressed, fed, and sent off to school with the correct lunch money, homework, musical instrument, and special projects (“Dad, I need a President Taft costume tomorrow”). We can lavish care on our children because we have just a few kids at a time. Now imagine that you have a hundred thousand children to look after. There is just no way that each of those kids is going to get lunch money or a clarinet! So, for a species like the walleye, “parental care” consists of laying your eggs in a likely spot and hoping for the best.

There are some advantages to having a lot of offspring, though. When you are very fecund, you can win the lottery in a way that species with few children cannot. For instance, in most years only a few of a cottonwood’s innumerable seeds will survive to their first birthday, and none will make it to adulthood. But maybe one year, just maybe, a meandering river exposes a brand new sandbar just as those seeds appear. In that lucky year, a thousand seeds from a single cottonwood tree might sprout and grow up to become adults on Cottonwood Island. No matter how good a year he has, Jeff Bezos won’t have a thousand children that year who all grow up to become senior vice presidents of Amazon.

High fecundity also allows for rapid natural selection. If the environment changes abruptly – for instance, if humans start spraying DDT all over the place – the few individuals able to survive in that new environment can multiply rapidly. Such rapid adaptation is impossible for species with low fecundity. This is part of the reason that fecund insects like mosquitoes and houseflies became resistant to DDT in just a few years, whereas birds like eagles and osprey, which lay just a few eggs each year, declined.

But these advantages come at the cost of countless deaths in highly fecund species, many of them in the spring. Just as surely as spring is a time of new life, it is a time of death. In the end, which is the crueler month – April, when false promises are made, or June, when they are broken?