Video of scientists from the University of Minnesota, Duluth studying quagga mussels impact on phosphorus in the Great Lakes.

Editor’s note: This is the second in a series of stories about profound ecological changes that test our ability to manage the Great Lakes. It’s a test that comes as state and tribal officials negotiate a key agreement affecting fish and fishing for the next 20 years.

The impact that quagga mussels have on the Great Lakes food web gives deep meaning to the saying, ‘food for thought.’

These prodigious filter-feeders are implicated in the decline of many Great Lakes fish species, well beyond those with commercial and recreational value. 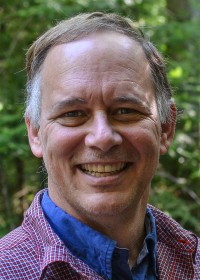 “I think they’ve had very broad effects on overall fish abundance,” said James Bence, co-director of the Quantitative Fisheries Center at Michigan State University. “There’s been a general decline in abundances that really began in the early 90s.”

If you’ve ever shopped for fresh fish and debated wild-caught versus farmed fish for dinner, it can be a difficult decision.  Often, but not always, farmed fish is cheaper.

Some people may choose wild-caught because there’s something mysterious about eating a wild animal.  Most of us haven’t a clue what fish do before they’re caught and brought to market.

That’s part of the mystery we pay for.

And it is perhaps the most atavistic experience to be had at your local grocer, an experience largely lost since we yoked ourselves to modern agriculture.

It takes a web to build a fish – and a wolf

There’s a lot that goes into making a fish before it’s caught.

The fillets you choose, no matter the species, say something about the integrity of the fish’s environment. The raw materials necessary to make an adult fish were present in that lake, river, ocean or whatever.

A wild-caught fish is in your shopping cart because the food web allowed it to be.

An analogy: Iowa used to have wolves. There are reasons you won’t find them in an Iowa cornfield nowadays, beyond that Iowans don’t want wolves in their corn.

One of them is there’s not enough for wolves to eat.

Quagga mussels have highjacked the food web in the Great Lakes. And now the wolves of the Great Lakes – predators like lake trout, lake whitefish and introduced salmon – are struggling. The web doesn’t work the same way anymore, calling into question how many fish the lakes can make and support, and how many fish people should be allowed to take.

These are key questions getting hammered out by negotiators in Michigan as they update a 2000 legal settlement outlining the number of fish allowed to be taken by recreational, state-licensed and Native American commercial fishers from the waters of northern Lake Michigan and Huron covered by the Treaty of 1836.

Unlike wolves that can walk away from Iowa to more hospitable habitat, fish in lakes are stuck, having to make do with what food the lake provides.

It’s all about P in the lakes

Here’s the middle school science class explanation of what happens:

A food web describes the movement of chemicals and energy that comprise all life. Much of life can’t access these chemicals and their energy in their most basic forms.

But primary producers – largely microscopic plants, bacteria and fungi – are masters of capturing chemicals and energy in their rawest forms, converting them into forms that the rest of life relies on.

Those of us further up the food web owe our existence to the ability of humble primary producers to take up these chemicals along with energy supplied by the sun. 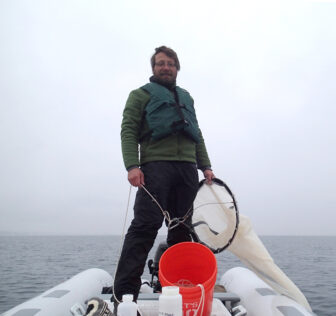 “In most freshwater ecosystems, phosphorus is the main nutrient limiting productivity,” said Ted Ozersky, an associate professor of biology and lake ecology and member of the Large Lakes Observatory at the University of Minnesota, Duluth.

“Phosphorus is usually the thing in shortest supply,” said Ozersky, who has studied the impact of zebra and quagga mussels on lake ecosystems. “So basically, the supply of phosphorus is like a tap, determining how much plant growth occurs in lakes.”

“The more phosphorus you add, the greener the lake becomes from phytoplankton,” he said. “And because the production of phytoplankton controls a lot of other things – it controls water quality and biomass of consumers like zooplankton and eventually fish – this one element ultimately controls the way the whole ecosystem functions.”

The quagga mussels have eaten so much of the phytoplankton, they now control most of the Great Lakes phosphorus. That means they also control the food web.

Ozersky and his University of Minnesota colleague, Sergei Katsev, discovered this rather serendipitously. Katsev, a geochemist and ecosystem modeler, had studied the chemical characteristics of Lake Superior sediments for years before he and Ozersky turned their attention to the lower Great Lakes. 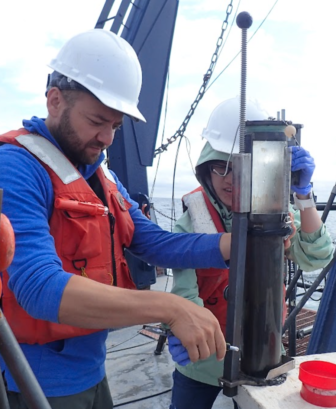 “When we started looking at these lower lakes you cannot ignore the mussels; that’s the biggest ecological disruption,” Katsev said.

“They’ve changed the processes on the lake floor.”

Lessons from the 18th century

To discover the mussels’ central role in controlling phosphorus, they used a technique – mass balance analysis – based on the discovery of French scientist Antoine Lavoisier in 1789.

He’s the one that discovered that elements are neither created nor destroyed, but rather move around the planet unchanged.

The phosphorus in your bones may have been in the tooth of a dinosaur hundreds of millions of years ago, leaving the dinosaur upon its death to wander the Earth until it arrived in your bones.  There it will sit until you die, and it is released to find a new role.

Odds are that if you live in the Great Lakes Basin, upon your death that phosphorus will end up in a quagga mussel.

“Phosphorus is conserved in the lake, it is a currency that’s not created or destroyed,” Katsev said.

Phosphorus limits the biological productivity of the lake by determining how much algae grows.  And algae are at the base of the lakes’ food web.

Under normal circumstances, the fate of free phosphorus – not part of the body of algae or another organism – in the lakes is limited.  It is removed primarily through sediments or through the outflow out of the lake, he said.

For phosphorus in the lake, “it’s a pretty simple budget,” he said.

Katsev and Ozersky quickly realized that quagga mussels are really important in controlling phosphorus in the water column.

The Great Lakes have a new phosphorus gatekeeper

Prior to the mussels, people controlled phosphorus levels in the Great Lakes “initially by dumping a whole lot of it into the lakes inadvertently, and later through the implementation of phosphorus control strategies,” Ozersky said.

The mussels have taken over and now are in control.

The Clean Water Act, signed in 1972 by President Richard Nixon, reduced phosphorus in the Great Lakes.   Now that the mussels have taken over, we’ve blown past the goals set out in the Clean Water Act.  Phosphorus is so low in the deep waters of Lake Michigan and Lake Huron that it threatens the productivity of the lakes.

“You can forget about the typical geochemistry; the mussels now dominate,” Katsev said.

Katsev and Ozersky reported this shocking development in the Proceedings of the National Academy of Sciences.

Animals are not supposed to be the gatekeeper of the base of the food web, but that’s what has happened with quagga mussels in the Great Lakes, except for Lake Superior where mussels haven’t been able to colonize as well because it’s too cold, not productive enough and lacks enough calcium for the mussels to make their shells.

The implications for life in the Great Lakes and people who fish and earn a living from them are huge.

What quagga mussels have done to the Great Lakes is a reminder of deep fundamental principles of chemistry, how life operates, where food comes from, our own place in the food web and our ability to profoundly impact it.

For most people, including Katsev and Ozersky, the mussel’s impact is best appreciated by looking at the lakes with your eyes.  They are noticeably clearer. 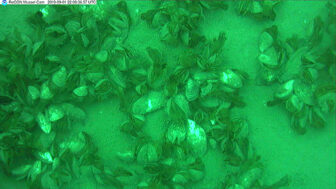 The researchers once lowered a camera nearly 200 feet below the surface to look at mussels, Ozersky said.

“The camera was equipped with a light, but we forgot to turn it on. It was dim, but we could still see the bottom from the natural light.”

Tomorrow: Where biology meets geometry in the Great Lakes