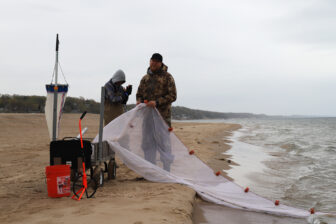 Editor’s note: This is the fourth in a series of stories about profound ecological changes that test our ability to manage the Great Lakes. It’s a test that comes as state and tribal officials negotiate a key agreement affecting fish and fishing for the next 20 years.

Three men pull a fat-tired wagon filled with scientific equipment through the sand of Pere Marquette beach. Dressed in layers against the late spring cold, their camo-print chest waders lend a rocking character to their gait not typical of beachgoers.

“It’s one of the most fun things we get to do in our jobs,” said Steve Pothoven, a fishery biologist at the National Oceanic and Atmospheric Administration’s (NOAA) Great Lakes Environmental Research Laboratory in Muskegon, Michigan.

Pothoven and fellow NOAA researchers Jeff Elliott and Aaron Dunnuck work beaches along Lake Michigan in May and June, studying how well young lake whitefish grow to be adults. 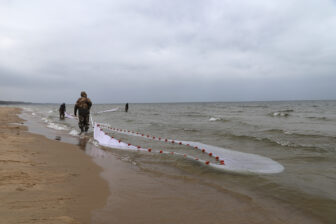 Lake whitefish in Lake Michigan and Lake Huron have a recruitment problem.

Since the early 2000s fewer young whitefish have been making it to adulthood.  Fewer adults mean fewer fish for commercial fishers to catch.

“We just don’t know a whole lot about these fish and what supports them early in their life,” said Pothoven.

And even the little information that’s out there from long ago, we don’t know if it’s the same, as the lakes have changed so much, he said.

They study the problem at familiar and popular beaches – places like Pere Marquette beach in Muskegon and the expansive beach at Grand Haven State Park. 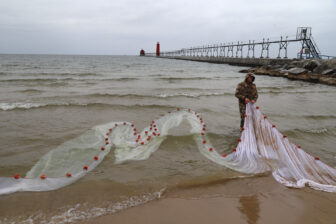 They get to work.

Dunnuck hits the water.  Walking straight out into the lake, he drags 150 feet of seine net weighted on the bottom, the water rising to his chest.  Turning to his left he walks parallel to shore, the net unfurling and forming a crescent as he returns to shore.  He and Elliott pull in the net, gathering up any fish in its path.

On shore they open the net to assess their haul. 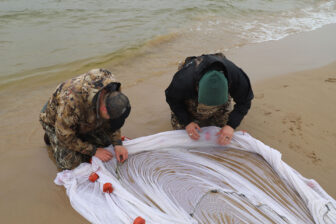 On this day it’s scant.

A few small silvery fish – what most of us would call ‘minnows’ – lay in the net.

The two rapidly identify and count all the fish, keeping the whitefish and tossing the rest back.

Dunnuck heads back into the water with a small net on a pole with a small jar on the end to sweep through the water.  He is collecting zooplankton – baby lake whitefish food – to see what’s out there for them to eat.

They move down the beach twice more, repeating the process.

Back at the NOAA lab, Elliott looks at the zooplankton under a microscope, identifying the tiny animals based on differences in their otherworldly bodies.  He’ll open the stomachs of the young whitefish to compare what they’re eating to what’s living in the water.

Information like this collected year-after-year can help us understand the lives of baby lake whitefish and shed some light on why they’re struggling.

Understanding the decline of lake whitefish recruitment is important for fishery managers and regulators as they approach the deadline to update a 2000 consent decree that regulates recreational and commercial fishing in Lake Huron and Lake Michigan.

Prized for its mild flavor, finding whitefish on the menu of local restaurants is an important part of the ‘up north’ experience for Great Lakes’ summer tourists. 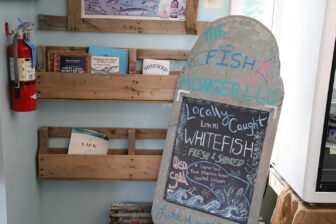 Lake whitefish compose 95% of sales of commercially caught fish in Michigan, with a dockside value of just over $4 million, Sea Grant, Michigan, reported in 2020.

For members of Great Lakes tribal communities, lake whitefish are much more than a source of income.  The fish have been an integral part of their diet and culture for thousands of years.

Understanding why young lake whitefish struggle across much of the Great Lakes is a major focus of fisheries research by the state and by the tribes.

“You have to remember, 99.9% of all fish eggs laid, die,” said Mark Ebener, a fishery biologist who worked 37 years for two inter-tribal Great Lakes organizations.  He is first author of a large 2021 review addressing declining recruitment in lake whitefish in the Great Lakes and published by the Great Lakes Fishery Commission.

Most of the evidence for why fewer baby lake whitefish live long lives points to one culprit: invasive mussels.

The premise is that dreissenids (zebra and quagga mussels) have fundamentally changed how energy flows through the system, dramatically reducing zooplankton in nearshore waters, Ebener said. 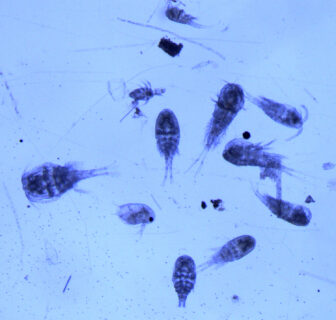 The introduction and spread of the invasive mussels in the 90s and early 2000s led to a collapse of the Great Lakes food web.

This happened when lake whitefish had been doing pretty well in the lakes.

The timing of the arrival of the mussels and the drop in lake whitefish recruitment is likely more than mere coincidence.

“Yeah, certainly, we think that’s one of the primary causes of the decline in whitefish recruitment – the lack of zooplankton,” Ebener said.

This is a major concern.

With so many people so fond of a fish struggling so mightily to hold its own, a key question for negotiators is how many lake whitefish can be harvested each year if fewer of them are reaching adulthood?

It takes a long time for newly hatched lake whitefish to become large enough to be caught commercially and old enough to reproduce the next generation.

“It used to just be two to three years and they’d be in the fishery, probably reproducing,” said NOAA’s Pothoven.

Mussels slow the time needed to make a whitefish

Because of the mussel’s impact on the base of the food web, now it takes at least five years, and perhaps up to seven or more years, before lake whitefish are reproductively active and large enough to be commercially caught, he said.

“They don’t grow like they used to,” Pothoven said.

Pothoven and his team are among the scientists trying to understand the early life history of lake whitefish.

The group refers to themselves as the ‘Great Lakes Juvenile Coregonine Assessment’ team. Coregonine is the group of fish that lake whitefish belong to.  The team is led by Kevin Donner, the Great Lakes Fisheries program manager of the Little Traverse Bay Band of Odawa Indians in Harbor Springs, Michigan.

“For us, when we started this in 2013, whitefish were already in decline, but we didn’t know how much,” Donner said.

And predicting the future is always a dicey prospect.

A major concern for Donner and his colleagues is that by the time you collect information on fish big enough to be commercially caught, six or seven years may have gone by without anyone knowing that there might be problems that began while the fish were babies. Nobody was looking.

“So, if something bad happens, like for example today let’s say no whitefish are born for whatever reason, we are going to continue along on our merry little way for seven years before anyone has enough data to say, ‘Oh God, something’s wrong.’” Donner said.

It could also go the other way.

If his group’s work bears fruit, it might calm nerves and predict better how many lake whitefish are available for harvest years in advance, even allowing proactive relaxation of rules on commercial fishing.

With so little understanding of the life of young lake whitefish, how do scientists study them?

Since 2013, the survey team has sampled beaches in the spring mostly in the 1836 Treaty waters primarily around Michigan’s northern Lower Peninsula. 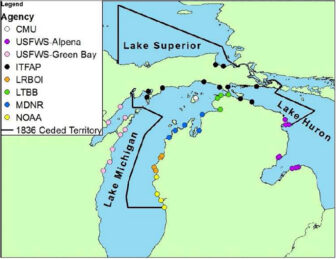 Map of Michigan showing sampling sites in the 1836 Treaty waters where juvenile lake whitefish have been collected. Image: Kevin Donner

Lake whitefish spawn in autumn, favoring protective rocky nearshore areas.  When the eggs hatch in the spring, the larval whitefish are incapable of feeding themselves. They survive off a yolk sac, a pouch coming off their bellies that is filled with fats and other goodies, that keeps them going until they’ve grown enough to hunt on their own.

When this happens, they venture into open waters, many choosing the seemingly barren environment found on sandy beaches favored by people.

“Most people wouldn’t even know that larval whitefish exist right around their ankles just before they’re comfortable swimming in the lake,” Donner said.

There are places in the Great Lakes where baby lake whitefish do much better.

In areas where lake whitefish are doing best, the food web is propped up by nutrients coming mostly from activities on land, he said. Here, the mussels don’t have the stranglehold they do in the open waters of lakes Michigan and Huron.

It’s always been risky to be a baby lake whitefish. But improving their odds for survival even a little bit can payoff significantly, Ebener said.

If 99.995% of fish eggs don’t survive, even a miniscule bump in baby fish surviving can be very important to the species, he said.

One thought on “Water test: One fish, two fish – where are all the whitefish?”