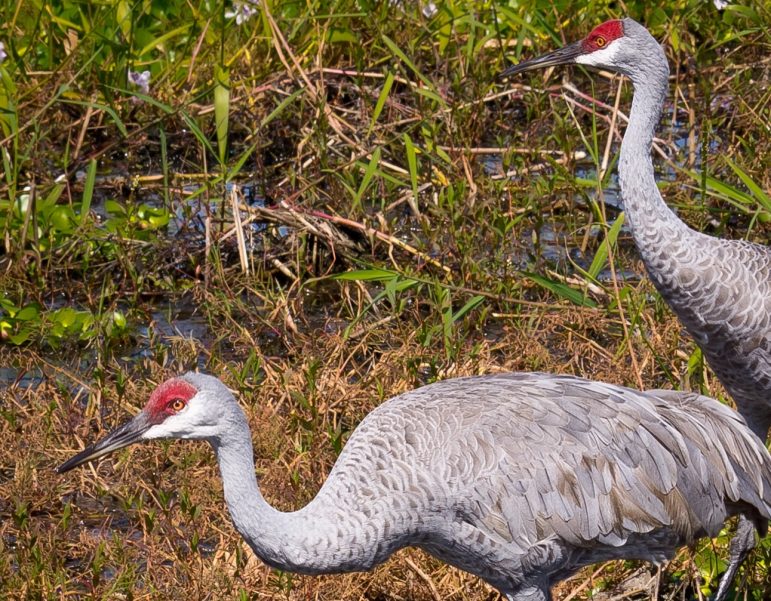 Some lawmakers want to reverse a hundred years of conservation and allow hunting of Michigan’s sandhill crane.

The push comes as the cranes – by the hundreds – are expected to land at the 23rd annual CraneFest on Big Marsh Lake in Bellevue at dusk Oct. 14-15. The CraneFest celebrates the big birds in art and offers educational materials.

Rep. James Lower, R-Cedar Lake, recently introduced a resolution asking the Natural Resources Commission to add the birds – some as big as 5 feet tall and with a 6- to 7-foot wingspan – to a list of Michigan game species, and to seek U.S. Fish and Wildlife Service approval for a hunting season. The resolution was passed in the House Natural Resources Committee Committee.

Lower said many of his constituents complain that the birds damage crops. They favor freshly planted corn.

But conservationists say the birds still require protection. The Michigan Audubon Society and the Kiwanis Club of Battle Creek sponsor CraneFest at the Kiwanis Youth Area in Bellevue, overlooking Big Marsh Lake. The event promotes crane awareness and provides optimal viewing of hundreds of cranes as they land for a rest on their way south.

The Department of Natural Resources reports a 10.5 percent annual increase in Michigan’s sandhill crane population from 1966 to 2013. The Nongame Wildlife Fund recently found 805 breeding pairs in the state, the DNR reported.

Farmers with damaged crops can apply for permits to hunt them from the Fish and Wildlife Service. But even with a crop damage permit, farmers cannot eat what they kill, Lower said.

“I think it is sad and wasteful. It would make a lot of sense to be able harvest the meat,” Lower said.

“Hunting is a valid and preferred way of wildlife management. We would like to see hunters have the opportunity to manage the population,” said Amy Trotter, the deputy director of the organization.

The birds were once rare in Michigan but their population has recovered.

Julie Baker, director of the Michigan Songbird Protection Coalition, said, “The sandhill crane has been protected as a non-game species for a hundred years, and we hope to remain that way,” said

The bird is native to Michigan but was hunted to near extinction, Baker said.

Hunting them was banned nationwide in 1916 when they verged on extinction. By the 1930s, only 50 breeding pairs lived in Michigan, Minnesota and Wisconsin.

Because they reproduce very slowly, it took several decades for the birds to recover, Baker said. A pair usually hatch one or two chicks each year.

The increase in population in recent years is because the crane is protected as a non-game species. For the first time in many decades the population has stabilized but is still vulnerable, Baker said.

“There is no good reason to recreationally hunt sandhill crane. There are no benefits to anyone,” she said.

Farmers don’t have to kill them, Baker said. Most of the damage is done in the first three weeks after corn is planted and chicks have hatched. Farmers can apply a product that makes crops taste bad to the birds.

The issue has not come before the state Natural Resources Commission which sets hunting seasons. The DNR only monitors the population, said Ed Golder, the agency’s public information officer.

John Matonich from Marenisco, the chair of the Natural Resources Commission, said, “There is no initial discussion on that yet. If there is an interest, we will look into that, and we will work with the wildlife division to see their recommendation and options then decide.”