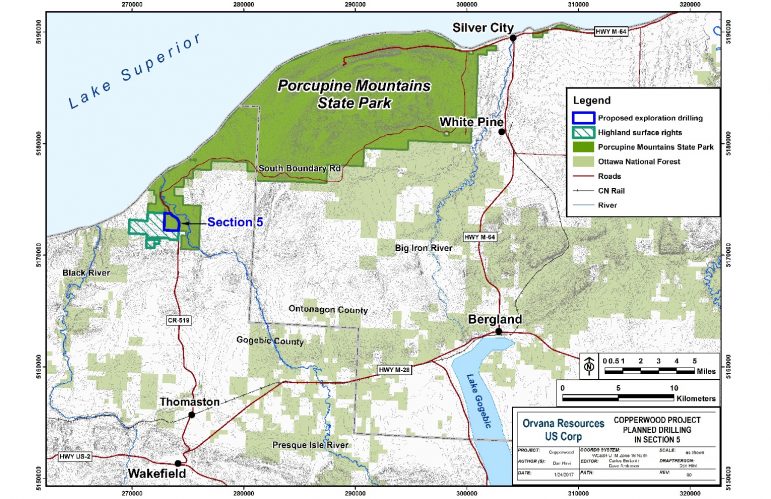 Map of where the drilling is happening in Gogebic County. Image: Highland Copper.

There has been a fierce public reaction to a copper company drilling at the west edge of one of Michigan’s most remote state parks.

Orvana Resources U.S. Corp.–a subsidiary of Highland Copper–is doing exploratory drilling near the Porcupine Mountains Wilderness State Park in the western Upper Peninsula. It is not producing copper, but many members of the public aren’t happy with what it may mean.

The National Park Service has a timeline of copper mining in Keweenaw from prehistoric times to present on its website. It includes the first non-Native attempt to mine copper there in 1771. Highland Copper’s current project is merely the latest. Even the section where Highland Copper is drilling has been test-drilled before, in the 1950s, according to John Pepin, the deputy public information officer for the Michigan Department of Natural Resources (DNR).

It’s an interesting legacy, considering how much of Michigan’s economy also depends on the lakes surrounding it. Erosion around mines and water contamination from their waste have been problems. 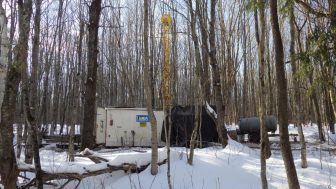 “It’s a wild state park to begin with, and having industrial activity there is a shame,” said Steve Garske, a board member of the Upper Peninsula Environmental Coalition Mining Action Group. “It seems like mining companies keep targeting areas that are important to the state.”

The Mining Action Group recently condemned the mining, claiming that the DNR has “demonstrated a stunning disregard for the health of the land and the wishes of its citizens.”

“Sulfide mining industry is leading the state of Michigan around by a leash,” Kathleen Heideman, an Upper Peninsula Environmental Coalition board member said in a press release.

A lot of the anger from the public and environmental groups like the Mining Action Group is because the Department of Natural Resources announced the area would be drilled Feb. 6, the day after drilling started, as well as the fact there was no opportunity for public comment.

But the DNR did not step out of bounds, Pepin said. He compared the use permit the agency granted Highland Copper to what the DNR would give someone wanting to use state land for a wedding.

“This is very similar to what we issued them,” Pepin said. “We commonly issue these use permits for these kinds of activities, but they don’t require advance public notice or public comment. What I mean by that is public input is very important, but at this point it’s very premature. 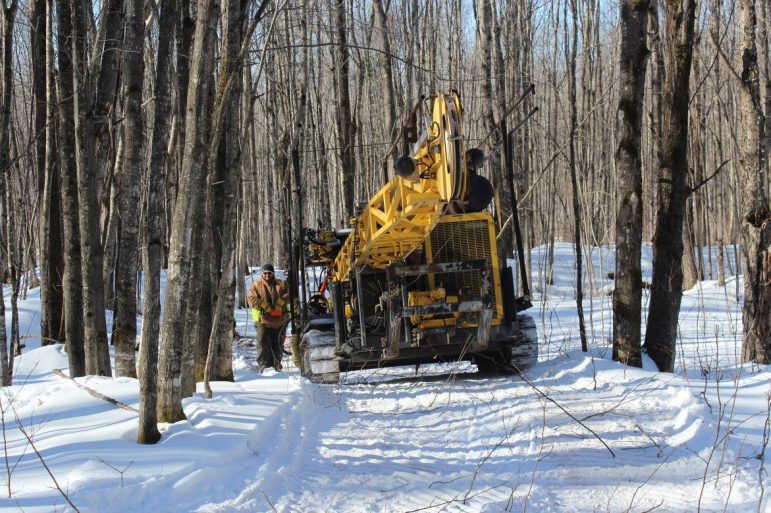 “At this point it’s just exploratory drilling. It hasn’t been determined for certain that there will be mining.”

The DNR’s press release also made clear that any actual mining, beyond the exploratory drilling, would be regulated in a separate process. Highland Copper would have to prove to the Michigan Department of Environmental Quality (DEQ) that “no material damage would occur to state-managed park surface features.”

That is when the public would be given time to comment, Pepin said.

The agency’s press release describes the exact location and size of the drilling area and what Highland Copper will do to mitigate environmental impact.

Highland Copper is “using the old railways and old logging roads so they don’t have create any new roads other than in tiny paths,” Pepin said. “If they’re knocking down any trees they’re reimbursing the state for that. They’re only using vehicles with tracks.” 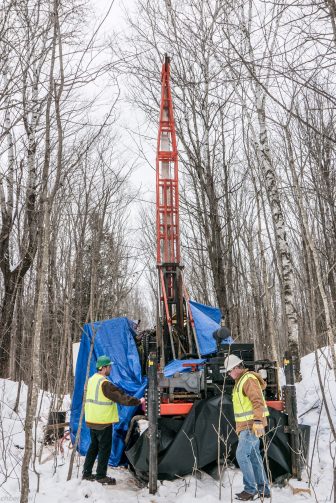 If Highland Copper goes through with the plans for mining and receives approval, it would also be allowed to drill underneath the land surface only from outside the park so it would not damage the park surface.

“We’ve had inspections from DEQ and DNR,” said Dave Anderson, the director of environment with Highland Copper. “We’ve done outreach with area environmental groups and continued conversation with them, and anyone is always welcome to visit the area and see what’s going on.”

Anderson said he helped create the board for the Friends of the Porkies, a nonprofit organization geared to protect the interests of all users of the Porcupine Mountains Wilderness State Park, and that he is well aware of the environmental impact of the mining.

“At this point, there’s no decision to apply for a mining permit yet,” Anderson said. “I think there’s a chance there will be a mine there someday–near the park, not in the park. We’ll see with copper prices in the future, but this isn’t something happening in the near future. It’s many years out at this point in time.”