It seems like yesterday that I read this headline:

It was February, 2009 and Jackson was President Barack Obama’s newly-minted administrator of the U.S. Environmental Protection Agency.

The occasion was Great Lakes Day in D.C., the annual lobbying event sponsored by the Great Lakes Commission. The assembled advocates were brimming with hope, expecting Obama to keep a campaign pledge and invest in Great Lakes restoration.

And he did, putting a $475 million down payment in his first budget specifically for the Great Lakes with a promise of more to follow. His campaign promise was $5 billion.

In 2011 at Great Lakes Week in Detroit, Jackson told a larger gathering that a top EPA priority would be to combat Lake Erie’s algae problem. It threatened drinking water quality and northern Ohio’s tourism economy.

It was a heady time — a honeymoon — where all things seemed possible.

The married among us know that honeymoons are blissful… and short.

It’s the long run that matters, the ride can be bumpy and success is not guaranteed. That’s especially true in the sausage-making world of Washington politics.

The headline has changed:

The region has experienced two significant drinking water failures in two years: Toledo and Flint. That’s what’s in the spotlight. People have been hurt and the region’s brand, if it had one other than Rust Belt, has been further tarnished.

In August of 2014, Toledo went without drinking water for three days. Toxic algae fueled by farm pollution was the culprit. Today, Flint is embroiled in a crisis of epic proportions as its water is lead-poisoned.

But Gina McCarthy, Jackson’s successor as EPA administrator, recently was all about defending the indefensible when she testified before Congress on her agency’s role in Flint.

McCarthy’s regional administrator, Susan Hedman, had just resigned as Flint became a full blown crisis. Hedman knew the water contained lead months in advance of it becoming public and said nothing publicly. She dawdled, consulting with lawyers as a public health crisis unfolded.

In a display of either convenient ignorance or arrogance McCarthy said the resignation “was a courageous act on her (Hedman’s) part.” Hedman said she didn’t want her presence to detract from helping Flint.

McCarthy, who reports to Obama, had to ignore a lot of facts to make that statement.

Efforts to restore the Great Lakes did go forward but suffered a setback in Obama’s second year. Political and fiscal realities prevailed and the budget was reduced to $300 million. It’s an annual fight to keep it at that level.

Toss in the Asian carp crisis and the executive branch’s lack of a long-term solution and restorative Great Lakes work lost its luster.

It continues and is making progress in cleaning 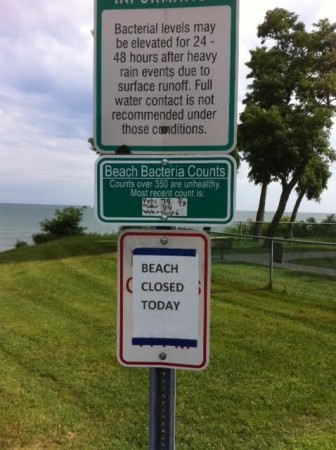 But it’s hard to celebrate fish passages, mapping wetlands and frivolous projects like Chicago’s Northerly Island when Lake Erie is worse off than it was in 2009. The algae bloom in 2015 was a record surpassing the one in 2011 that prompted the EPA to make fighting algae a priority.

And, while 100,000 people in impoverished Flint are sustained by bottled water, the EPA can’t come to grips with its own failings.

I requested an interview with Obama’s Great Lakes point-person, Cameron Davis, for this commentary. Davis declined citing his workload.

Davis is not an aloof policy technocrat. He worked for years as a tireless advocate and has been on the inside working for the Great Lakes for seven years at the EPA.

The (invited) keynote speaker in D.C. is Gina McCarthy, Davis’ boss. I’m not expecting a mea culpa on Flint or Toledo if she shows up. It doesn’t appear to be in her makeup.

I’m also not expecting much from the two-day D.C. confab about drinking water quality. The official agenda devotes a scant 30 minutes to it.

No, Great Lakes Day in D.C. is a feel good, rally-the-troops event. It’s about working within the system and not making politicians and agency heads uncomfortable.

But as the attendees listen to the sound-bite speeches and walk the halls of Congress lobbying, they should pause.  Pause to think about how we got from Lisa Jackson’s optimism in 2009 to Gina McCarthy’s arrogance in 2016.

And about people in Flint queueing up in the cold to get basic drinking water. Spend a few minutes pondering how government at all levels failed them and Toledo residents.

Somehow we forgot about people and safe drinking water in the rush to restore the Great Lakes.

One thought on “From optimism to arrogance: a look at EPA on the eve of another Great Lakes Day”