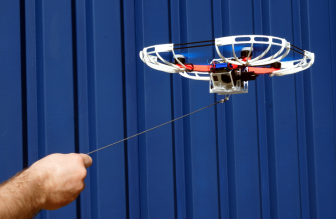 And I think I may have stumbled over one relevant to experimental journalism.

Here at Echo we report on the potential of drones in a number of non-military applications. It’s sort of a swords-into-plowshares tale with twists involving privacy, safety, ethics and other red flags.

environmental data and of telling environmental stories. Drones have exciting potential that we have explored in the classroom at Michigan State University’s School of Journalism.

That work has revealed at least three thorny obstacles for the broader application of this technology to journalism:

That’s why my interest was caught recently by the Fotokite, a device that developer Sergei Lupashin calls a “purpose-built tethered flying camera.” It is basically a camera mounted on a quadcopter — a small helicopter with four rotors – and controlled by something similar to a retractable dogleash.

Additional modifications enable the craft to fly relative to the user rather than strain constantly against the leash. Otherwise the system would be hard on both the machine and its battery. See the demonstration in the video below.

I’ll grant that the Fotokite is not as sexy as a radio-controlled drone buzzing far from the operator with the help of a GPS guidance system while streaming back video images.

But the Fotokite has great potential to ease some of the obstacles identified above.

While the Federal Aviation Administration tried to ban the commercial use of drones before it developed regulations for them, a court has ruled that it did so inappropriately. The FAA is appealing that decision. But even if the agency ultimately wins, those regulations clearly exempt tethered craft.

Who knows how the courts will sort out this muddle or what kind of regulations the FAA will propose. Recently the agency said it will miss the 2015 deadline mandated by Congress for larger craft, but will deliver regulations yet this year for smaller ones.

In the meantime, the Fotokite makes for a great platform for experimenting with this technology.

It also requires far less skill and practice to operate safely than a radio or Bluetooth controlled system.

“From an operator standpoint, it’s very easy to use, self-contained, safe, and may be used in a bunch of places where drones aren’t practical or aren’t allowed,” Lupashin wrote in an email.

“The last time we leased a unit out it took 5 minutes to show someone without any (Remote Control/Unmanned Aerial Vehicle) experience how to operate it, and about 30 minutes to go through all the peripheral details (charging, troubleshooting, etc).”

A huge advantage is the greater accountability it enables. The people operating the craft are easy to identify: They are at the other end of the tether.

“Bystanders — anyone, even a toddler — can immediately tell who is responsible for the vehicle and if they are in any sort danger, ” Lupashin wrote.

Recently the Washington Post reported that non-military drones flown with the FAA’s permission by universities, police and other registered users were involved in 23 accidents and 236 unsafe incidents since November of 2009. That doesn’t include accidents by the military or by unregistered users or hobbyists.

Recently the National Park Service, citing noise and safety concerns, banned drones from 84 million acres that it controls. I get that. People go to the parks to escape the hubbub of electronic devices. And they don’t want to be victimized by a crash.

And yet I’ve seen some spectacular video of natural wonders taken from the perspective of an Unmanned Aerial System – another name for a drone. And some of it clearly illustrates the consequences of environmental problems.

Somehow we must balance the peril and the promise of the technology.

Meanwhile, Lupashin says he’s continuing to test the Fotokite to make it bulletproof to operate. Availability and price have not been announced.

“In some exceptional circumstances we try to get units out early for high-impact, early-adopter applications,” Lupashin said. “You can contact us via the website — www.fotokite.com — and you’ll get an email once it’s ready.”

Journalists are among those who have asked for a crack at it, he said. But there is a laundry list of applications – photography, archaeology, environmental montoring, sports videography.

One thing the Fotokite apparently can’t solve is what to call this class of aircraft. Advocates don’t like drone because of military connotations. Critics of Unmanned Aerial Vehicles say that term places too much emphasis on the craft. They favor Unmanned Aerial Systems. Others say both terms are sexist and favor Uncrewed Aerial Systems or Vehicles. Another contender is Remotely Piloted Aircraft.

And all lapse into opaque acronyms.

“We usually call it a tethered flying camera, or a tethered flying robot, or just a ‘Fotokite’,” Lupashin said. “People can’t agree on drone vs UAS vs UAV vs RPA vs … so I don’t expect anyone to agree on a name for this type of device either.”

Upending the basin is an occasional series of columns about environmental journalism written by Echo Editor David Poulson, the associate director of Michigan State University’s Knight Center for Environmental Journalism.

One thought on “Upending the basin: Can Fotokite ease drone drama for journalists?”