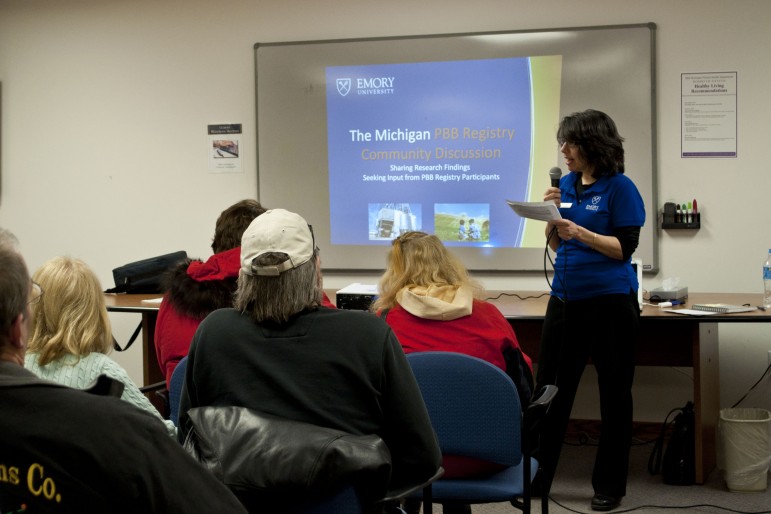 Researchers from Emory University in Georgia have returned to Michigan’s Gratiot County to continue to study if the health of residents and chemical plant workers is harmed from chemical contamination in the 1970s.

The concern is whether contamination left by the Velsicol Chemical Co. in St. Louis, Mich., has longterm health consequences for the county’s residents.

A total of 280 community members participated in two days of blood drawing and a 10-day reproductive health-screening clinic in March.

“It was an enormous turnout,” said lead scientist Michele Marcus, an epidemiologist at Emory. “We were expecting more people to participate than in previous clinics, but we hadn’t quite expected that many.”

Emory collected blood samples in both December and March, and will be analyzing them for an alphabet soup of chemicals such as PBBs, PCBs, DDT, DDE, HBB and PBDE.

The study stems from when PBB — polybrominated biphenyls – manufactured at the former Velsicol plant was accidentally mixed into cattle feed used on farms throughout the state in the 1970s.

People who ate the contaminated meat and chemical workers and their family members may have traces of PBB and other chemicals produced at the plant in their bloodstreams, said Marcus.

Rollins School of Public Health researchers tested 200 people Gratiot County citizens during a visit last December. They returned because the more participants that are studied, the more meaningful the results, Marcus said.

Marcus said the team has analyzed the December samples for PBB and returned results to participants. They will conduct the laboratory testing for the remaining chemicals following the completion of the March PBB analyses.

“ These analyses are very complex and normally take 3 to 6 months for completion,” said Marcus.

And although they can’t tell if a specific individual’s health problem is related to signs of PBB, Marcus says they can still see if there is an increased risk from having such chemicals in their bodies.

“I think it is really important for the community members to learn what health risks they may have,” said Marcus. “If they are harmful — and we have demonstrated a number of health effects that already are — we should be sure to protect the health of the next generation by not making chemicals that disrupt the endocrine system and overall human health.”

Emory started working with what is now the Michigan Department of Community Health on the Michigan PBB registry in the mid-1990s. But in 2012, the department passed along the research to Marcus’ team due to a lack of state funding.

When Marcus’ team took over the research, chemical workers, who were originally included in the PBB registry by the health department, had not been included in the new rounds of testing that Emory planned for December 2013 and March 2014.

When Ed Lorenz, a member of a citizen committee advising federal officials on a clean up of the Velsicol site, learned of the study, he emailed Marcus that the St. Louis chemical workers needed to be included in the research.

“What then started was a process to try to get former workers and residents of the community of the plant site to be a part of this restarted health study,” said Lorenz.

“Part of the challenge was finding people who had moved. We had flyers put up all over town. We sent mailings to hundreds upon hundreds of people. We had handouts to show where you get your blood drawn.”

The Mid-Michigan Health Department, the citizens group and the Emory researchers have found around 500 people to be tested and added to the official registry.

The research is funded by the Centers for Disease Control and Prevention, the National Institutes of Health and the U.S. Environmental Protection Agency.

Marcus said her team has already seen health problems in some of its previous research.

“We did find that there were more cases of breast cancer among highly exposed women than you would expect in a population of this size,” said Marcus. “We also found increased risk of thyroid problems, particularly among men.”

Marcus said these findings will help encourage women to get breast cancer screenings, and men to understand the risk of thyroid problems, leading to earlier diagnoses.

Aside from community members benefiting from the research, Norm Keon, an epidemiologist at the Mid-Michigan District Health Department, said it is helpful to medical workers throughout Gratiot County.

“We will be able to better inform the physicians in our area because of the research being done here,” said Keon. “A lot of our doctors were not here back in the ‘70s when this incident happened. If we can let them know now that their patients may have been exposed to PBB and what health effects they are seeing, it will lead to our physicians being able to provide better care.”