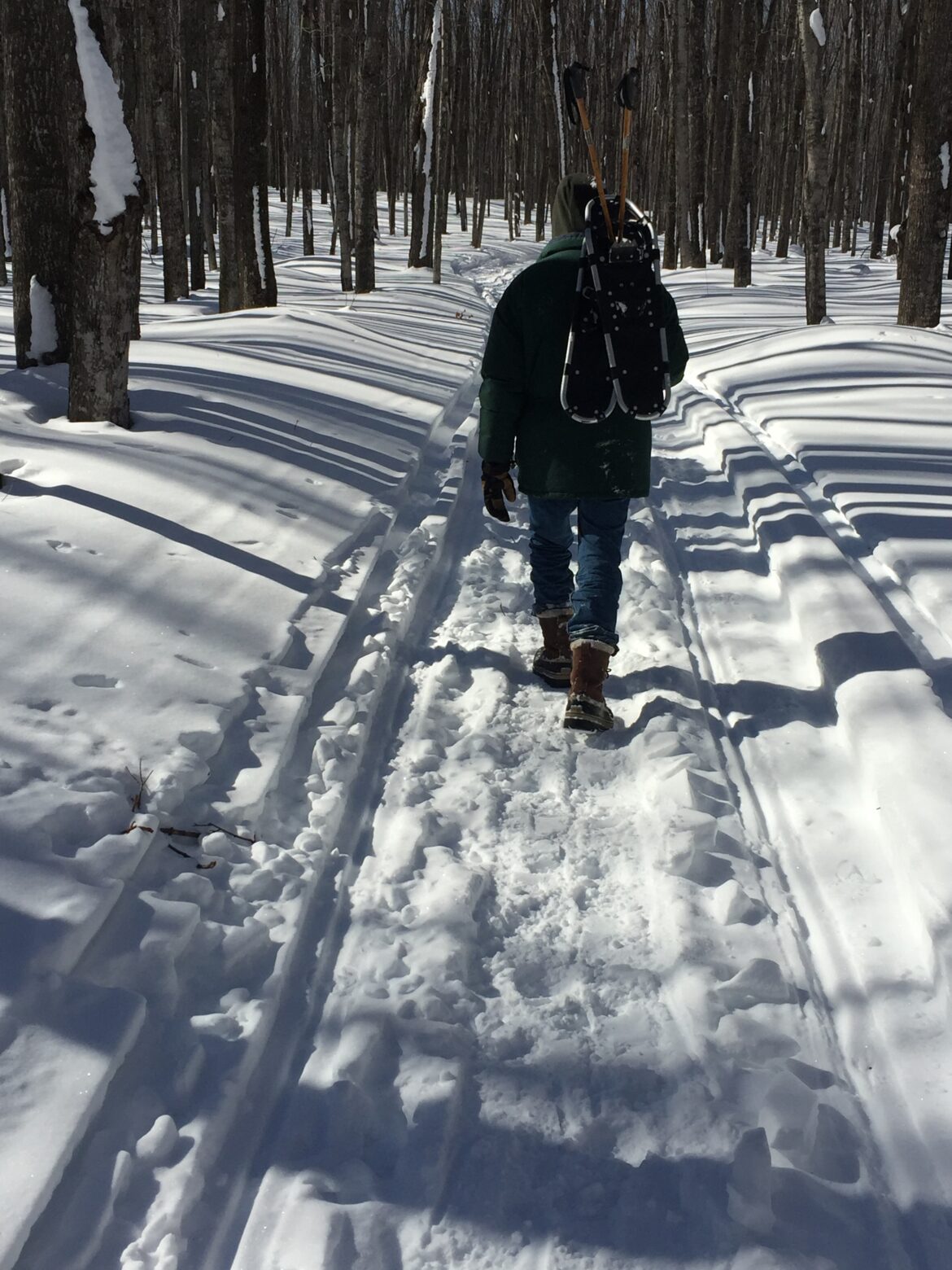 An Upper Peninsula Lutheran minister recently linked Christian and Indigenous theology, gray wolves and COVID-19 in an article for Earthbeat, a climate change reporting initiative for the National Catholic Reporter.

Jon Magnuson, is the director of the Cedar Tree Institute in Marquette, Michigan, a non-profit organization that runs seminars and workshops related to mental health, religion and the environment. The institute also provides counseling, mediation and consulting.

It collaborates with other  organizations including the Department of Native American Studies at Northern Michigan University, the Environmental Protection Agency and the Keweenaw Bay Indian Community.

Magnuson, with masters degrees in divinity and social work, has taught classes at Northern Michigan University, Oregon State University, Seattle Pacific University and the University of Washington. He writes about spirituality, cross-cultural conflict and psychology.

This interview has been edited for length and clarity.

Brandon Chew: What should people know about this piece? 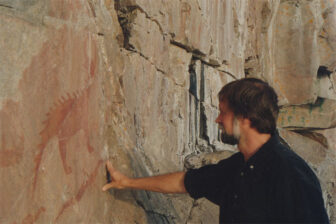 collision of a pandemic and also a climate and environmental crisis around the globe. We’re really questioning our whole political paradigm we live in here in North America and the West.

The winter is coming, the winter is upon us. This is what the Ojibwa call the time of the hunger moon. And it’s a hard time.

So, the article is trying to make connections between the pandemic and these issues that now are obsessing and focusing the collective consciousness. And then of course the issue of the wolf because this is sometimes referred to by some native groups as the time of the “wolf moon.”

I’m trying to weave connections with hopefully some practical suggestions about what this might mean in the future in terms of how we deal not only with the species of the gray wolf, but also how we manage the environment and how we approach the pandemic.

We have disrupted the balance of our environment. And we have created this perfect laboratory for emerging microbes.

All our excitement about the vaccines, you know, good news or bad news? This is not going to fix the situation. This is a temporary fix. We have created this environment. So, the article addresses that through the predicament of the gray wolf in the Upper Peninsula.

Chew: What’s some wisdom that people can learn from St. Francis, religious organizations and Indigenous cultures on how to live with nature?

Magnuson: Well, Wendell Berry is a Kentucky farmer and a beloved poet, and he has 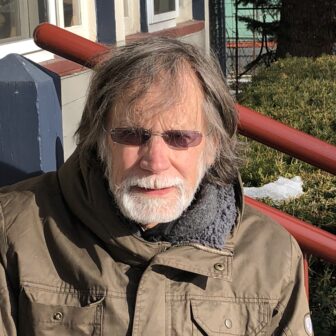 some wonderful advice. He says, “You know, everything begins by taking care of your neighborhood.”

My vision is that faith communities could be one place you could go to learn about the complexity and beauty of your local, natural environment, including water, botanical life, wildlife.

The way it starts is a devotion, a commitment to learning about where you live, your neighborhood, and delighting in that.

The way I do that is when they come and visit, I’ll teach them about weather. So, we go out in the weather. No matter what the weather is, we dress for it and we go out hiking.

That kind of engagement with harsh landscapes, harsh weather, it actually brings humility. It helps people become more humble. You’re more thankful when you come back to your apartment, you know? And you’re frozen and you sit there and say, “My God, I have a warm place here.”

There’s a Japanese tradition called “forest bathing,” It’s essentially based on the fact that if you walk in a natural environment, there are physiological changes in the body that occur on a molecular level.

So your mother or grandmother’s old suggestion, “Hey go out and play. Go outside and play. Get outta here” – they knew something.

Those of us who live in Michigan, it’s so beautiful to have the change of seasons. Those of us that have animals, they become our teachers to help you learn about your neighborhood.

Also, to challenge your own narrative about your own safety. That’s a spiritual, existential question. Are you really living in a scary world? Is that the way you want to live out who you are and how you live?

Chew: You mention  the story of St. Francis talking about living with nature. Could you  talk about the conditions in the environment that creates microbes like those that cause COVID-19? 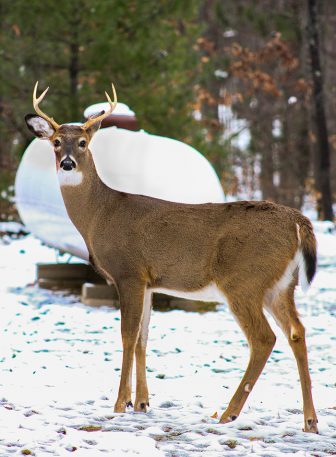 Magnuson: Depending on your point of view, you could call it a loss of innocence. An obsession with our power. The power of technology. The power of human creativity.

You can see prior patterns with the use of antibiotics in this country which has created drug resistant microbes. A lot of patients are picking up secondary infections from drug resistant bacteria that we have basically created by constructing artificial, over-hygienic medical settings.

In the last 10, 20 years we have seen this exponential increase in lyme disease across North America. Is it because the climate is warming? Well, that’s just part of the story.

The other story is the increase in white-tail deer populations and this kind of disconnect with the approach of people toward wildlife.

When you have an overpopulation of deer, you’re out of balance. You don’t have natural predators and then all of a sudden there’s a balance disruption and you have things like lyme disease suddenly rising.

The attitude of my hunting colleagues is the more deer, the better. The problem with that kind of thinking is you’re destroying habitat.

And then of course when the hunters go out, which deer are they going to take? The strongest and healthiest deer are what they want.

The wolf takes the weak and the sick and therefore, protects that genetic footprint among the deer and controls the population. A single wolf will take about 15 to 30 deer a year. Here in the Upper Peninsula we have estimated about 695 to 700 gray wolves.

Chew: Can you talk about mitigating some of the threats to gray wolves?

Magnuson: Well, one of the good things about government is we have set up state governments and regulatory agencies to monitor some of these issues.

The Department of Natural Resources tries to bring reason to some of the more extreme points of view about the presence of wolves here in the state.

These wolves, all of them with the exception of a few loners, are here in the Upper Peninsula. We have 80% of the forests here in the state and 3% of the population. So this is a good habitat for deer and for wolves to find that life together, that partnership.

In 1837 when Michigan was created, a wolf bounty was the ninth law to be passed. Over the next 150 years hunting wolves became a recreational pastime. And the population was essentially decimated.

Back in I believe 1985 or so, there was only one breeding pair left in the Upper Peninsula. And then because of conservation efforts and partnerships with the state, the wolves were brought back. 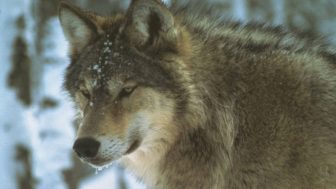 The reason they’ve been protected now is because of the Endangered Species Act, that was struck off the books by the last administration on Nov. 3. So now the issue is will the hunting season be open on wolves and what will that mean for the families of wolves that exist?

We’re kind of in a transitional place with the wolf population and there’s a lot of emotion around it. There is a projection of fear, anxiety, disconnect with the natural world.

I’ve been with many people from larger cities who come here to the Upper Peninsula and I’ve watched them turn to their children and say, “Now watch for wolves, watch for bears.”

Chew: I’ve gone on nature walks in preserves from my neck of the woods and I’ll have people from the Lansing area ask, “Do I have to worry about bears” or something. And I’ll tell them I’ve lived here twenty-plus years, I’ve never seen a black bear, I’ve seen black bear dung once.

Magnuson: So in a nature preserve they’re frightened huh?

Chew: Well, I’m sure it was their first time being there. They were just curious about the animals. Let’s say someone’s farm or property is being damaged by a wolf or a pack of wolves, what should they do to humanely resolve that situation?

Magnuson: Well one of the really good things in the Endangered Species Act is that it has a provision that if wolves present either a threat to livestock or to human persons, the state will come and trap the wolf and move the wolf, or if necessary will kill the wolf.

There’s been 25 wolf kills since 2004. The last official kills were in 2016, when the DNR shot three wolves near Ontonagon. It had to do with a farm that was losing livestock.

The wolf is, what we call in psychology, an archetype. It carries this emotion that’s not necessarily grounded in fact.

Chew: You mention what contributes to people overly fearing wolves and misinformation that causes people to fear nature. How is that like the current pandemic?

Magnuson: I’ve just finished reading a study on 9/11, on the psychology of terror. The researchers’ position was that the most basic drive we have as human beings is for safety.

In the religious community we talk about people choosing to live in a world of scarcity or a world of abundance.

I was at a local sports hunting store two years ago. There was a young man from Wisconsin buying weapons. Buying several rifles.

I said, “So you carry weapons?” He said, “All the time, I have several in my truck.” I didn’t make a judgment on that. I said, “Have you been doing that for a long time?” 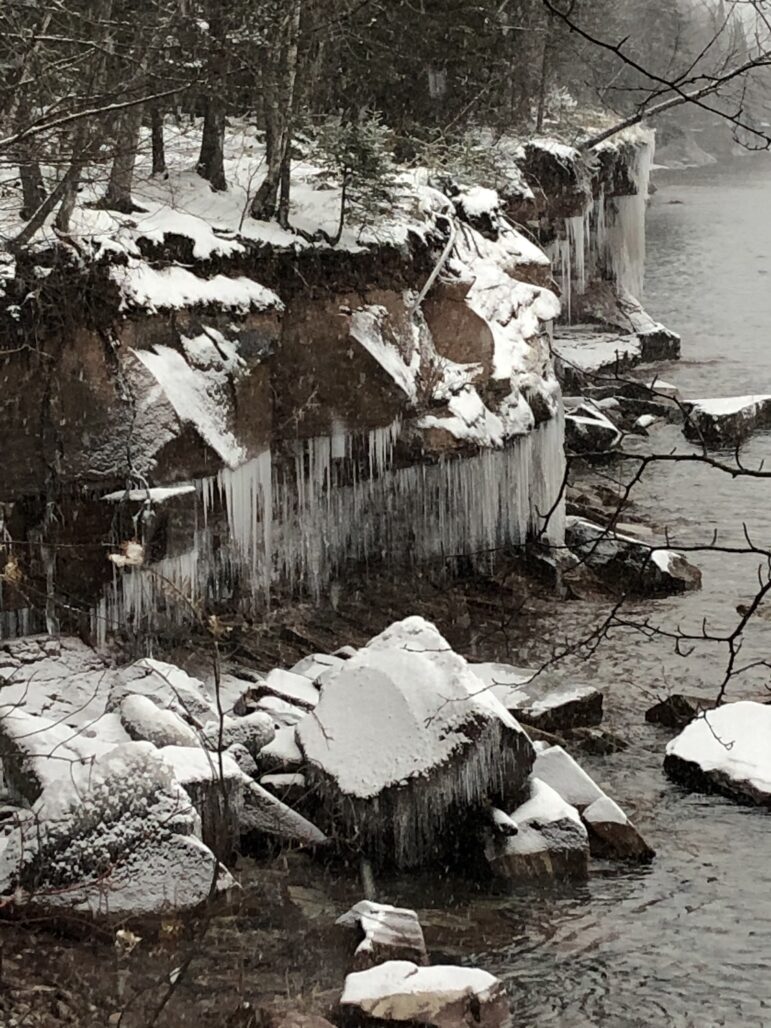 Those are existential questions that I think the article raises and it also opens another door into our relationship with the natural world, which we’re cut off from. And so we have projected into the natural world.

We’ve projected our fears, or our innocence.

I think the challenge for us all is to find our way through this. And I suggest at the end of the article some hints about what that might look like. I talk about how people thinking that vaccines will save us. That’s a miscall in my opinion.

Social distancing and vaccines will not save us until we make a commitment to protecting the planet’s underlying, ecological integrity. And that has to do with keeping these kinds of balances between deer and wolves. Between wild places and more developed areas.

I also suggest  for our faith communities to lift up visions of hope through rituals and songs and poems and prayers so that we can choose to be intentional caretakers, not simply consumers of the created order.

Chew: Are there any last comments you’d care to provide?

Magnuson: The Dalai Lama once said:

Whatever is coming for us, no matter how prophetic and jarring, let’s all pray there is some gentleness in it.