Ice has decreased by 71 percent on the Great Lakes over the last 40 years. Photo: Alex Leone.

Lake Superior is losing its ice, and quickly.

A study published in the Journal of Climate has found that Lake Superior is sporting 79 percent less ice than it did in 1973, and, overall, ice has decreased by 71 percent on the Great Lakes over the last 40 years.

The study measured the amount of ice on the lake, and used satellite pictures and Coast Guard observations that were collected over the last four decades for comparison. In 2012, a mere five percent of the lake water froze over. Compare that to 94 percent in 1979 and an average of 40 percent since records were started in 1973.

“There was a significant downward trend in ice coverage from 1973 to the present for all of the lakes, with Lake Ontario having the largest, and lakes Erie and St. Clair having the smallest,” said Jia Wang, the primary author of the study, which was conducted at the NOAA Great Lakes Environmental Research Laboratory in Ann Arbor, Mich. “The total loss for overall Great Lakes ice coverage is 71 percent, while Lake Superior places second with a 79 percent loss.”

Although there is no smoking gun to indicate why the ice loss is happening, a variety of factors–including a changing global climate–are considered likely causes.

Ice loss on Lake Superior can end up contributing to lower lake levels, more lake-effect snow, and higher shoreline erosion rates. The largest and most dramatic result could be an overall increase in lake water temperature.

Jay Austin is an associate professor of physics with the UMD’s Large Lakes Observatory, which has conducted research how ice plays into the year-round picture of the lake.

Ice causes sunlight to reflect off its surface instead of being transferred as heat into the water. More ice means cooler water temperatures, because more of the sun’s energy is reflected off the lake’s frozen surface.

“We are seeing an earlier start of the warm seasons and consequently warmer temperatures throughout the summer,” said Austin.

“The temperature is kind of like the master control knob for the lake,” said Austin. 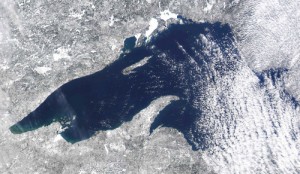 Everything from weather patterns to nutrient cycles is controlled by the lake’s temperature.

Donn Branstrator is an associate professor of biology with the Large Lakes Observatory and studies zooplankton, an intricate part of the biological food chain in the lake.

“Zooplankton’s growth rate relies heavily on temperature,” said Branstrator. “The warmer the temperature, the faster these organisms grow and reproduce.”

Although the effects of temperature on zooplankton are well documented, it’s still not completely understood exactly how a larger number of these organisms could play out in the lake.

This is, in some ways, the biggest challenge the lakes face right now. Although warmer temperatures might offer more favorable conditions to some organisms, others may not be so lucky.

“Fish are ectothermic, so a slight increase in temperature may affect their growth rates or their distribution throughout the lake,” said Branstrator. “Biological systems are under such strong influence by temperature. It doesn’t take big swings in temperature to have really major effects on physiology or biochemical cycles.”

Many of the causes and outcomes of ice loss on the lake can only be left up to speculation at this point. The unprecedented change in the lake’s climate in a relatively short time could make it more hospitable to invasive species and could put unforeseen stressors on its natural inhabitants.

Austin stressed, however, that the lake is not going to be entirely void of ice anytime soon.

“This means we’re going to see fewer years where we get lots of ice and more years where we see less ice,” he said. “It’s a very gentle trend with a huge amount of variability surrounding it.”

Republished with permission of The Statesman.