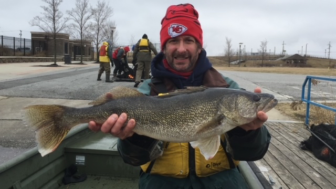 The nonprofit group Perch America has been stocking thousands of walleye into Wolf Lake for 24 of the last 25 years, creating a rich fishery for the small community of Hammond, Indiana.

Perch America is a conservation group that works with several government agencies to combat  invasive species, habitat degradation and pollution. The walleye stocking program is a part of the Lake Michigan watershed where members of the community like to fish. Caruso likes to call Perch America the voice for the fishermen.

Wolf Lake is shared by Indiana and Illinois. Slightly more than half of it is in Illinois which is shallower and filled with weeds. The Indiana portion is deeper and rockier.

Before Perch America, the state of Illinois stocked walleye in Wolf Lake. However, the habitat in the Indiana water is more conducive to the fish.They are a cold water species so they moved to the Indiana side, Caruso said. Fishermen were catching walleye on the Indiana side of Wolf Lake, and when Illinois officials began to not see a return on their side, they stopped stocking the fish.

That is when stocking by Perch America started.

Walleye cost a dollar per fish for the first five years of the program. Now they cost about three dollars per fish. All of the money raised by the volunteer organization  goes directly to purchasing fish, Caruso said.

Funds to supply the stocking are provided by annual community donations and fundraising. Perch America has purchased walleye from Richmond Fisheries in Richmond, Illinois every year since 1999, except for in 2017.

When Caruso and his team were unable to get walleye. He went to every donor and said that he would return their money. But donors  insisted that he keep it and use it for the next year, he said.

The donors are invited to each year’s stocking and they or a representative put the fish into the lake from barrels. 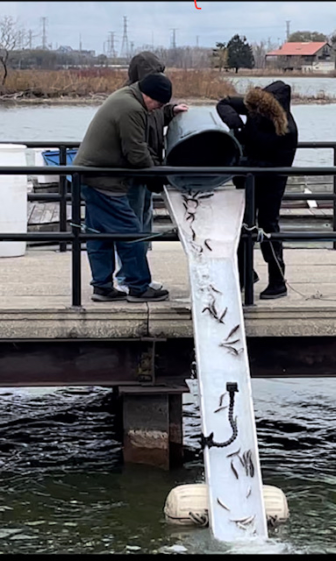 “They understand the integrity of the program and that the money is not being wasted,” Caruso said. “It’s kind of a cool thing because people get to see where their money’s going and that’s why we don’t have a problem with people donating to the problem.”

The Indiana DNR provides the permit to stock Wolf Lake and that state’s Board of Animal Health ensures that the fish are tested and clear of diseases.

The five-to-seven inch walleye work better as a predator than the fingerling walleye to keep a predator-prey ecological balance. The bigger walleye that are stocked  have less of a chance of being eaten by other species in the lake like northern pike and largemouth bass.

The city of Hammond, Indiana, operates and manages the lake’s recreational water activities and the surrounding properties within the city for community use.

Many anglers enjoy using Wolf Lake to catch walleye and other fish to take home to eat or for sport to catch and release, said Milan Kruszynski, director of the Hammond Port Authority.

Local residents use the lake for sailing, kayaking and canoeing.

There is yet to be  a study that shows if the walleye are reproducing, and so it is vital that Perch American continues to supply Wolf Lake annually to ensure the population, Caruso said.

Caruso and the Indiana Department of Natural Resources did put nets in the lake to harvest the fish in early 2020. With eight nets over the course of two days, they caught nearly 60 walleye. Caruso described the 11 that  were over six pounds as a “trophy fish anywhere you go.”

Caruso said he had no idea what Perch America would turn into when he first joined.

“We’re just taking a little sample throughout the lake, [and] so that shows that there’s a real healthy population of walleye in a lake that are surviving here because of our stocking,” he said.

The shallow ends of Wolf Lake lack enough rock beds for all of the walleye to spawn, Kruszynski said. The Hammond Port Authority plans to get a state permit  to place rocks on the bottom of the lake and other shallow areas, he said.

Walleye spawn over rocks and gravel in windswept shallow waters where the current will clean sediment from the eggs and aerate them.

“It’s a bit of a challenge because the walleye are looking for places to spawn and have more walleye,” Kruszynski said. “We need to help them.”

The grassroots program that benefits anglers is inexpensive, easy to enjoy and accessible for a small community like Hammond, Caruso said.

“The best reward for me was this one time I had a guy come in and drop a five dollar bill into a donation jar and he said that he took his five-year-old son to Wolf Lake and he caught his first walleye,” Caruso said.

“And you can’t put a price tag on that. I was so impressed with that, and it just makes you feel good.”