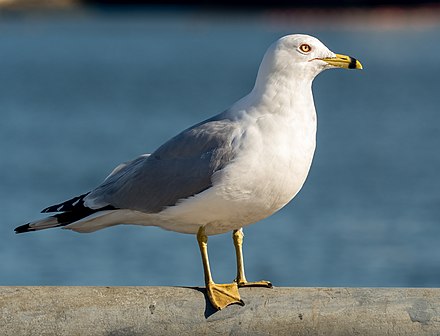 Those beaches rank among Michigan’s top 10 most-visited, the study said.

Using radiotelemetry trackers, researchers found that five of the 14 gulls made a minimum of two round trips between beaches and landfills during the summer they were observed.

And with gull populations in the Great Lakes region increasing more than 4% each year, the number of human-gull interactions is expanding, making the problem more concerning, the study said.

“They’re attracted to picnics and trash and algae that washes ashore on the beaches,” said Vanessa Williams, a staff biologist at Chicago-based Another Wild Goose Chase, a company that’s done gull removal work — primarily with border collies — in Chicago, Milwaukee and Indianapolis.

An Audubon guide to birds notes, “The ring-bill has adapted thoroughly to civilization. Flocks are often seen resting in parking lots, scavenging scraps around fast-food restaurants or swarming over landfills.”

Ultimately, when water quality becomes too bad for swimming, beaches are forced to close, at a high economic cost: The estimated net economic loss when a Lake Michigan beach closes is $35,000 a day, according to the study published in the journal Northeastern Naturalist.

To try and keep humans on the beach and gulls off, the scientists brought border collies to imitate predators and scare them, due to their natural pursuing instinct, said Thomas Gehring, a Central Michigan professor and one of the study’s authors.

They found border collies kept the gulls off the beach, and E. coli levels in the water dropped, Gehring said.

Though E. coli isn’t a direct human health threat, it’s an indicator that other, potentially more dangerous microbes are present, Elizabeth Alm, a Central Michigan microbiologist and co-author, said in an email.

“Gulls can mobilize disease-causing microorganisms in the environment,” Alm said.

Williams said that usually, after two weeks of using border collies on the beaches all day, gull numbers start to go down.

The dogs’ services come at a cost, and not all beaches have the money for it, she said. The Chicago beaches the company used to serve recently cut funding.

Alm said that since ring-billed gulls will travel nearly 15 miles (24 km) inland to waste sites and return to the beaches, waste treatment sites must also be monitored.

Waste site operators could cover their property and use loud noises or laser lights to deter gulls from landing there, Alm said.

Gehring said beach patrols are only part of the solution.