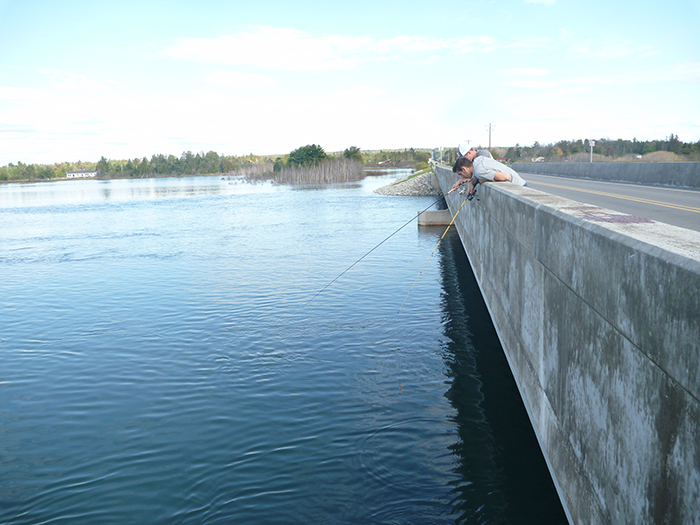 Students from nearby Lake Superior State University fish off the side of the newly built bridge into the Little Rapids. Image: National Oceanic and Atmospheric Administration Fisheries

The St. Marys River lost over half of its rapids in the last century, mostly due to artificial structures used for navigation.

Restoring one of the rapids is helping diverse fish species recover in the river that connects lakes Superior and Huron, according to a recent study.

Varied habitat is crucial for sustaining fish and increasing their diversity, according to the study published in Restoration Ecology. Two years after the restoration of what is called the river’s  Little Rapids, researchers found almost double the number of young fish at the site. 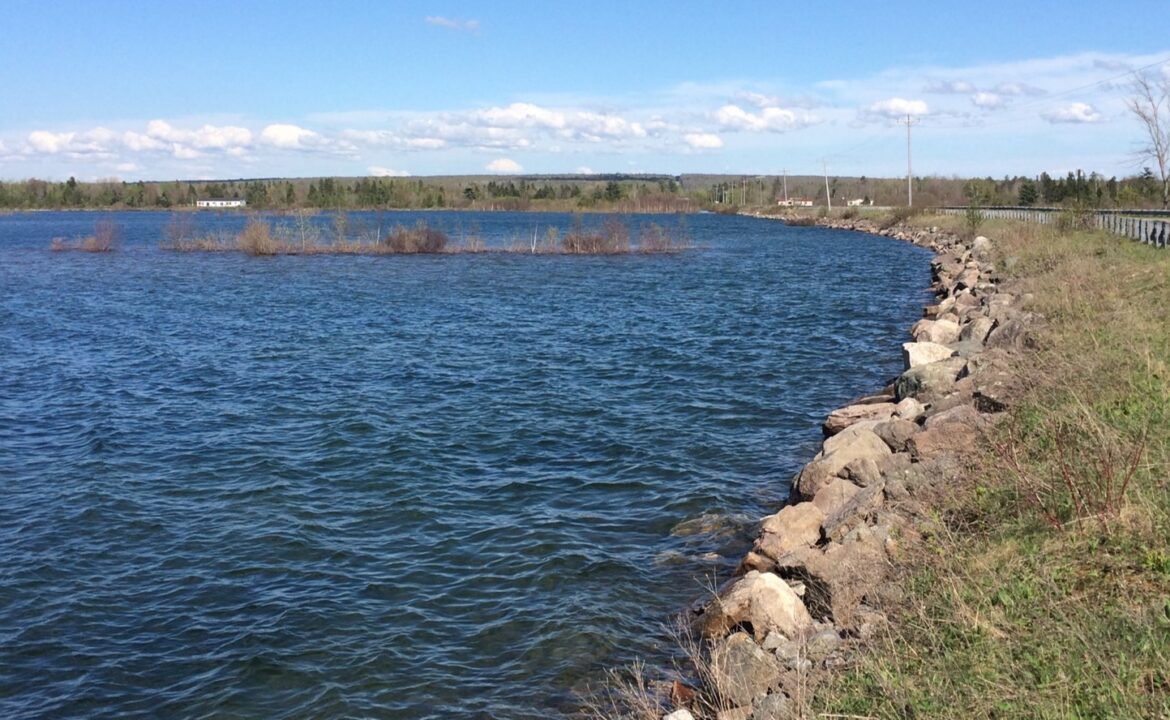 The flow of water into the Little Rapids was mostly closed off by a roadway built across the river to push water into a navigation channel for commercial ships. To restore the rapids the roadway was removed and replaced with a bridge in a $9.4 million project.

The importance of the rapids is about habitat diversity, not lack of habitat, said Alejandro Moctezuma, an author of the study.

Some fish like rapids because the material at the bottom of the river is ideal for laying eggs  and for those eggs to develop into adult fish, he said. The increased number of young fish counted at the rapids after the restoration is proof of increased spawning at the site. 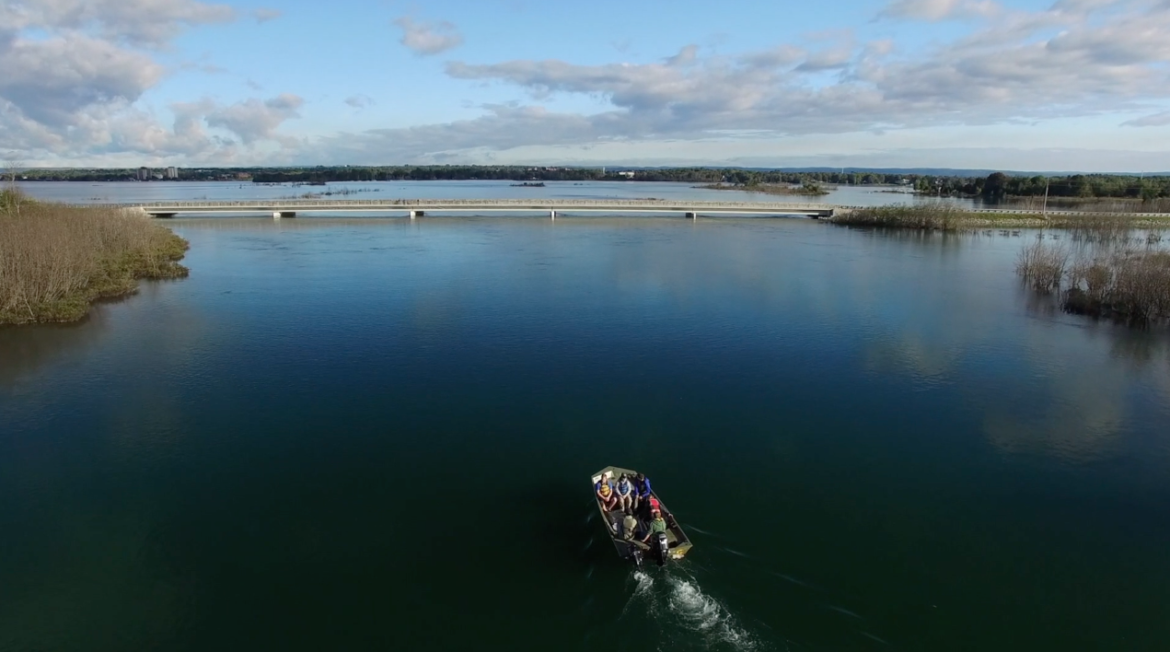 The newly built bridge over the St. Marys River is the only road that connects to the island. Image: National Oceanic and Atmospheric Administration Fisheries

Moctezuma said one of the most interesting parts of the research is that the rapids area is still in transition.

“Right now, we’re still seeing some changes in the community and we’re pretty excited to see what else is going to happen, if it’s going to change and if we’re going to see some new fishes that we’ve never seen spawn there,” Moctezuma said.

When the National Oceanic and Atmospheric Association funded the project, it hoped to see an increase of native fish, said Terry Heatlie, a habitat restoration specialist for the agency.

Researchers have already seen an increase in non-native fish like Atlantic and pink salmon but hope to see whitefish, lake sturgeon and walleye eventually find the habitat, he said.

Eric Ellis, the habitat restoration program manager for the Great Lakes Commission, said the ecological and recreational benefits of returning native fish was part of the reason it funded the project, too. 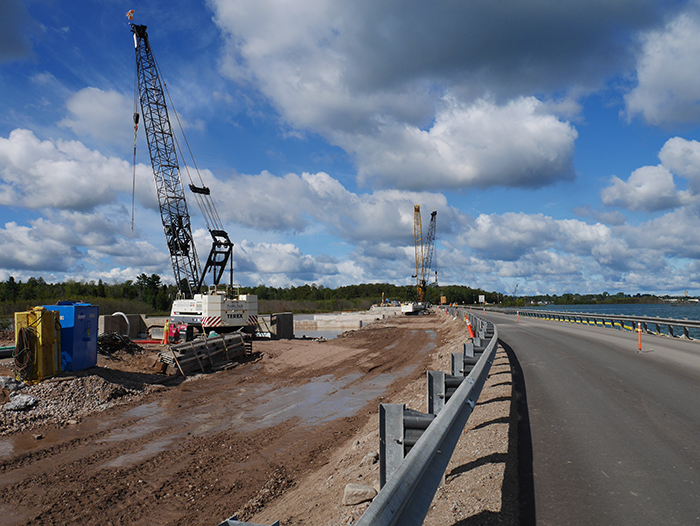 The bridge over the Little Rapids during construction before it was completed in 2017. Image: National Oceanic and Atmospheric Administration Fisheries

“Rapids habitat is not very common in the Great Lakes, and a lot of different species rely on it for various stages of their lifecycle,” Ellis said. “And some of these species are really declining—whitefish and lake sturgeon are two that come to mind. Also, species that are very important to recreational fisheries, like pink salmon and Atlantic salmon.”

The new bridge has pedestrian access separate from the road with cutouts for people to fish and view the river. The build also includes parking lots at each end so the area is more usable for the public, Heatlie said.

The St. Marys River project is a partnership to restore one of the Areas of Concern, the officially designated toxic hotspots in the Great Lakes region.

There are still three categories left before the river can be removed: restrictions on fish and wildlife consumption, degradation of plants and animals at the bottom of the river and fish tumors or other deformities.

The Environmental Protection Agency and the National Oceanic and Atmospheric Administration work together on other habitat restoration projects throughout the Great Lakes region.

It is challenging to restore large rivers, and freshwater restoration usually focuses on small streams, so this research is particularly important, according to the study.

Moctezuma said the project is ongoing. Researchers will continue monitoring the river into 2021 with plans for more publications.