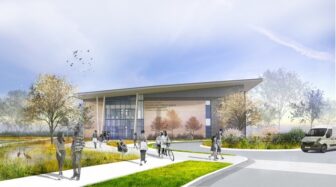 Green landscaping will prevent polluted run off from the Richard and Theresa Barch Center for Freshwater Research and Education building soon to be built along the St. Marys River. Image: SmithGroup

The project recently received $250,000 from the United States Forest Service as part of the Great Lakes Restoration Initiative, a program that protects Great Lakes drinking water and habitat.

Stormwater carries things like trash and bacteria from the city, through the drainage systems and into the river, according to the Environmental Protection Agency.  Landscaping, also known as green infrastructure in this context, reduces or treats stormwater runoff on its way to a river or lake.

The university’s project will use soil and native plants to collect and filter out pollutants before runoff reaches the river, said Ashley Moerke, the director of the Lake Superior State University Center for Freshwater Resources and Education.

“Part of us being an old city with a lot of former industrial development is that we no longer have those natural features,” she said. “It is a really simple mechanism. It’s creating depression areas and planting (them) with native plants that absorb (stormwater). It’s not this complicated idea, but it’s something that we’ve really moved away from.”

The landscaping will surround the proposed Richard and Theresa Barch Center for Freshwater Research and Education building. Once built, the center will house research labs, teaching labs and a Great Lakes visitor center.

The university is building the center on a former industrial site contaminated with pollutants. The land previously held a chemical factory. The  plan always included green infrastructure, but cleaning the site was more expensive than the university had budgeted. This prevented Lake Superior State from including the landscaping it wanted, Moerke said.

“When part of the [factory] was removed, much of the material was buried.” Moerke said. “So, when we started to put the foundation of our building in, we found whole railroad tracks, these huge cement abutments and a tremendous amount of debris. It ended up increasing the cost of our project like another million and a half.”

The agency was looking for a project that would turn a liability with poor quality soil into a natural landscape where vegetation can capture water and soil will allow it to flow more naturally, like it would in a forest, Johnson said.

The St. Marys River project met many of the Forest Service’s requirements, including involving students and community members, educating the public, reducing pollutant runoff and building on a former brownfield site, Johnson said.

Moerke said she hopes the project will inspire Sault Ste. Marie residents to expand green infrastructure along the river.

“This will be the first project in our region to use this type of approach,” she said. “So, we’re hoping that’s going to introduce the community to ways to be more environmentally friendly as we develop.”

The Forest Service will begin accepting grant applications for the Great Lakes Restoration Initiative again in spring of 2021.