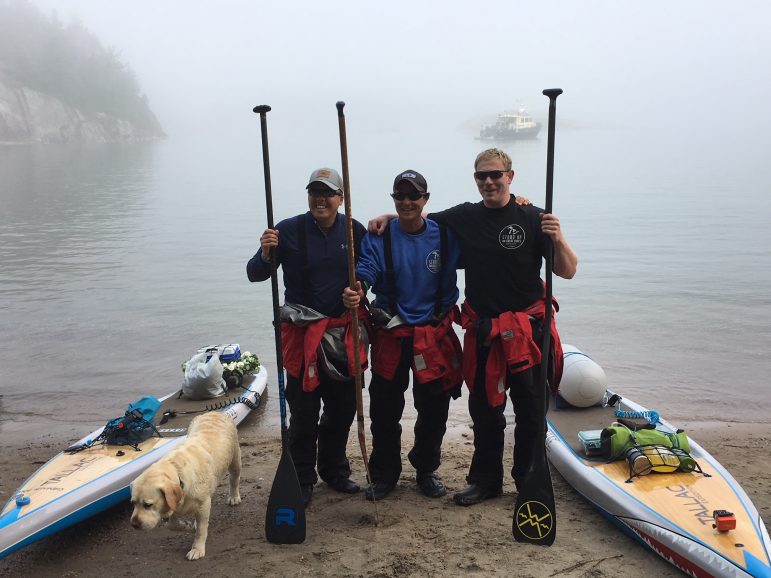 This isn’t your typical trip to the lake.

A group of Michigan men are planning to cross Lake Erie on stand-up paddleboards to raise money for Great Lakes research. The 80-mile, 24-hour, nonstop, sleepless trip should begin in the morning hours of Tuesday, weather permitting. The group, Stand Up for Great Lakes, hopes to raise awareness of Great Lakes issues and $10,000 via donations on their website to support students at the Cooperative Institute of Great Lakes Research at the University of Michigan.

A stand-up paddleboard is just what it sounds like: a long, buoyant board riders stand on and propel with a long paddle. It’s a vehicle often associated with shorelines and inland lakes, not the middle of some of the world’s largest bodies of freshwater.

The trip, which will start at Belle Isle State Park in Detroit and end in Sandusky, Ohio, won’t be just a pleasure cruise. The group is preparing for Detroit River currents, 2- to 3-foot waves and travel through shipping lanes. On their boards, they’ll each carry extra clothes, food and a straw that filters lake water. A safety boat will make the journey with them.

There will be times when getting into the safety boat and riding into shore will be hard to resist, said Kwin Morris, a science teacher and coach at Elk Rapids schools and a member of the group. The trips—the group has already crossed Lakes Michigan, Huron and Superior in the same fashion—have a tendency to turn him against the lakes, at least temporarily.

“During the paddle, I hate them,” Morris said. Exhaustion, near freezing temperatures and unpredictable weather push the paddlers to their limits.

But a love for the Great Lakes keeps them coming back each year to check another lake off the list and support another Great Lakes cause.

This time they’ll support the Cooperative Institute for Great Lakes Research, a research institution they chose for its work on algal blooms in the Great Lakes.

“Being Lake Erie, we wanted to do something more environmental,” Morris said. “When they said students, I was sold right away.”

Funds raised in efforts like these go to raise up the next generation of Great Lakes researchers, said Mary Ogdahl, the institute’s program manager.

They’ll first be used to support student fellows from around the country that study at the institute during the summer, Ogdahl said. Any funding beyond that will go to support a graduate student studying the Great Lakes at University of Michigan or one of the institute’s partner institutions.

Does crossing a Great Lake change the way you look at them?

“I didn’t appreciate how big they were and how powerful they were, but also how beautiful.”

While crossing Lake Michigan, it was only 37 degrees for the middle 40 miles of the trip. But the group saw an incredible display of the Northern Lights.

Even crossing Lake Huron let him glimpse the power and size of the lakes. That trip was the longest day of paddling followed by the longest night of paddling only to have the sun come up with the shore still not in sight, Morris said.

This week’s trip promises to provide another surprising look at one of the most ecologically troubled of the Great Lakes.

It’s possible the students they support with this effort may go on to relieve Lake Erie of its famous algal blooms.

Regardless of whether the paddleboarders encounter one or not.

Follow along with their journey on their Facebook page. The Cooperative Institute for Great Lakes Research will be posting updates of the trip from the safety boat on their Twitter feed as cell service allows.

Visit StandUpForGreatLakes.org to donate to the effort.