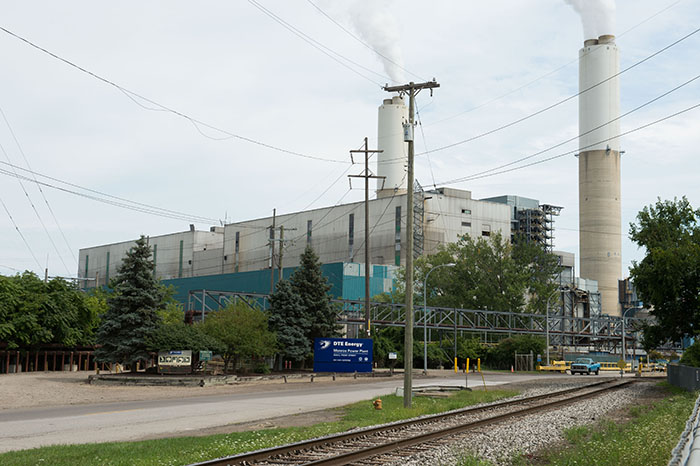 Editors note: This is the second of four stories on coal ash pollution in the Great Lakes region.

DTE Energy’s Monroe Power Plant produces more than half of the coal ash in Michigan.

The plant in Monroe near Lake Erie is among the state’s 29 coal ash sites and one of 17 that a non-profit environmental watchdog group says have polluted nearby groundwater with toxic substances like arsenic, lead, lithium and sulfate.

It also reports that cobalt, molybdenum and sulfate are at unsafe levels at Consumers Energy’s D.E. Karn in Essexville, while at J.C. Weadock arsenic, beryllium, cobalt, lithium and sulfate are present in the groundwater at high levels.

The report finds occurrences and levels of pollution the utilities and state do not. Some differences can be traced to varying interpretations of the Coal Ash Rule, the law that governs coal ash monitoring.

In other cases, like that of DTE’s Monroe Power Plant, the report’s authors were willing to report elevated levels of groundwater contamination, even if attributing it to the plant wasn’t possible under the strict parameters of the Coal Ash Rule, said Abel Russ, the report’s lead author and a senior attorney at Environmental Integrity Project.

A federal requirement in 2016 requires ash storage sites to be monitored from nearby wells.

“All the plants in Michigan that have disposal areas are working their way through the process, both under the federal and the state regulators,” Ring said.

It makes sense that the power plant at Monroe has half of the state’s coal ash burden because it is one of the largest power plants in the country, said Robert Lee, a DTE Energy manager in the department of environmental management and resources.

Like other power plants that burn coal, the Monroe plant produces two types of ash when it produces electricity. The heavier and granular ash, called bottom ash, is moved out of the bottom of the boiler with water, Lee said.

Fly ash is a fine substance that comes out of the emissions from burning coal. It is caught before it leaves the plant and is transported to disposal sites with water.

There is a fly ash disposal impoundment and a dry fly ash landfill, Younan said. Another impoundment holds bottom ash.

Monitoring wells are installed around the landfill to make sure it doesn’t leak, Lee said.

“We know that the water we discharge out of the impoundments back to the surface water meets state and federal limits,” Lee said. “We know that’s safe, too.”

DTE is in compliance with its ash disposal permit, Ring said.

“They did put in monitoring wells and do the sampling and they didn’t find any impacts from the site,” Ring said. 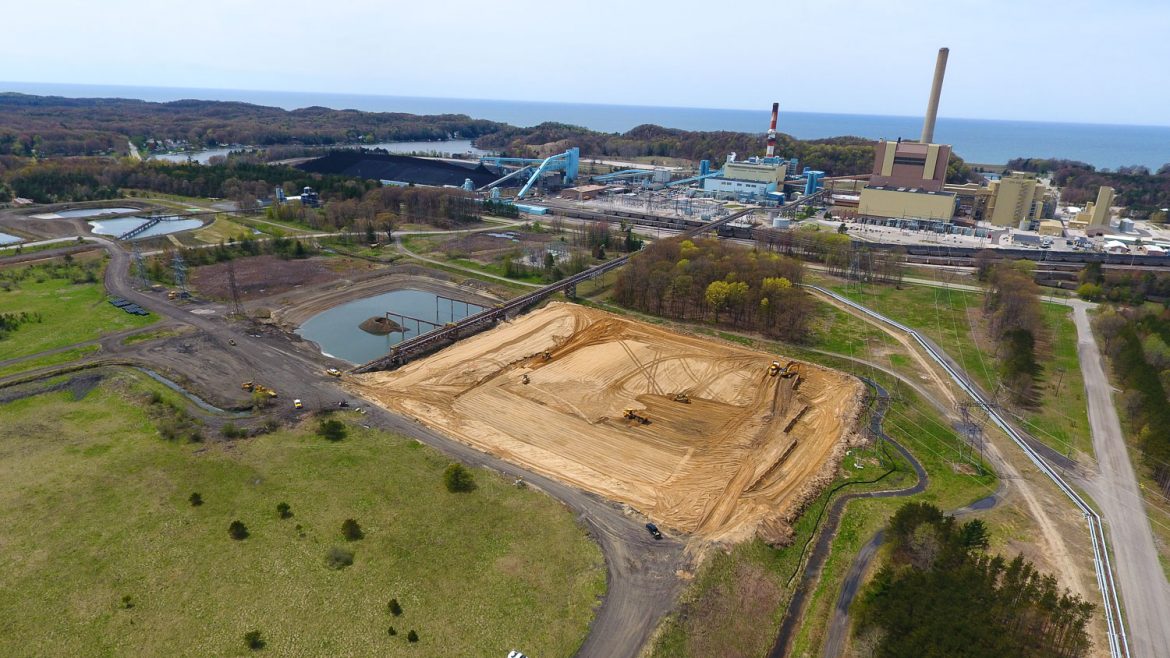 Consumers Energy is closing two coal-fired units at Karn in 2023. Two units at Campbell will close in 2031, and that plant’s third remaining unit will retire in 2040.

Consumers Energy is working within state rules and regulations to take all of the remaining coal ash it now has stored in the ponds to licensed landfills at Campbell, Karn and J.C. Weadock in Essexville, Morgenstern said. There are three ponds at Campbell and one pond each at Karn and Weadock.

“There is evidence of elevated levels of coal ash residuals in groundwater at some of the pond locations,” Morgenstern said. However, none of the ponds are near a public drinking well system as they are primarily in industrial areas.

There are common byproducts of burning coal including boron and lithium, he said.

Some older coal ash storage ponds were not lined with a clay barrier.

“Clay is used as a liner to basically contain the material on one side of the pond or in landfills,” Morgenstern said. “So, some of these early (landfills) back to the ‘40s were not lined. That is why we’re doing the cleanup.”

The Michigan Environmental Council, which has also issued a coal ash report, says that even landfills with clay barriers can leach pollution into groundwater. A synthetic liner is a safer option.

“We were having them monitor that to make sure they weren’t above any limits that we enforced where it goes into the surface water,” Ring said.

“Ideal world: we would love to see all the unlined coal ash impoundments closed and the coal ash removed,” said Charlotte Jameson, the energy policy and legislative affairs director for the Michigan Environmental Council, a coalition of non-profit environmental organizations. All coal ash should be moved to impoundments with impermeable, synthetic liners.

The federal regulations allow for some coal ash to be left in place but covered.

“We’re less enthusiastic about those,” Jameson said. “Particularly when you’ve got contamination and there’s no lining underneath them.”

DTE’s clean up plan involves disposing of ash from the bottom ash impoundment at a licensed landfill, Younan said.

Consumers Energy is ensuring Campbell and Karn are completely cleaned up and the deposits in the ground are properly disposed, Morgenstern said.

“It’s a very detailed process,” he said. “We do regular monitoring.”

It costs millions of dollars to engineer the landfills, haul the ash to them and monitor groundwater, Morgenstern said. “But we are committed to Michigan and the environment. It’s a very capital intensive process to do this and to do it right.”

The possibility of a coal plant improving its surrounding environment depends on how you define better, Jameson said.

“There are ways that they can clean up coal ash waste, remove it fully from site, remove contaminated sediment,” she said. Then the site could provide space for new businesses or solar energy generation. Michigan’s utilities are not yet fully committed to this full cleanup.

However, Consumers Energy has done a better job than DTE of moving away from coal and toward renewables, she said.

In Essexville and West Olive, Consumers plans to continue recycling and landfilling coal ash in landfills permitted by the state, Morgenstern said. A portion of the ash is used in road-building materials.

D.E. Karn in Essexville, Michigan. The plant has a permitted capacity of 2.96 million cubic yards of ash. Image: Consumers Energy

Coal ash at Monroe Power Plant raised levels of lithium and sulfate in groundwater to three times the level deemed safe by EPA, according to the Environmental Integrity Project.

It’s impossible to show that Monroe Power Plant is responsible for elevated levels of lithium and sulfate without comparing it to background levels of those contaminants in nearby groundwater, Lee said.

Without a background reading he trusts and because lithium and sulfate levels in groundwater are high at over half of monitored coal plants in the nation, Russ thinks it’s reasonable to assume that Monroe Power Plant is responsible for the higher levels.

DTE’s methods are acceptable under the Coal Ash Rule, Lee said. Monroe Power Plant hasn’t had to take action to clean up, as they would if they were not in compliance with the Coal Ash Rule.

At D.E. Karn in Essexville, cobalt, molybdenum and sulfate are above safe levels. The groundwater there has 48 times the safe level of arsenic, the report says.

At J.C. Weadock arsenic, beryllium, cobalt, lithium and sulfate are in the groundwater above safe levels.

The threat to drinking water is unclear.

“Michigan’s done a poor job of mapping groundwater aquifers and mapping contaminated plumes of groundwater,” Jameson said. No one knows exactly how contamination spreads in the groundwater near coal ash landfills.

“I think we need to do some more exploring,” she said. “Absence of evidence isn’t evidence of absence.”

The high rates of groundwater contamination at coal ash sites make cleanup important and demand the use of liners, not just clay.

“In the near term, I think prioritizing based off of where we’re really seeing pretty bad groundwater contamination makes a lot of sense,” Jameson said. “In the long term, the solution is moving away from coal generation completely.”

Said Morgenstern: “We think we have a good plan in place that protects the groundwater.”