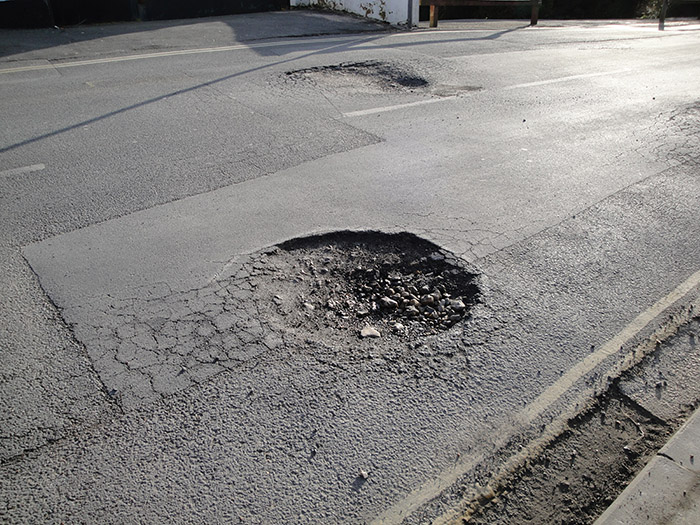 This year’s spring road damage in Michigan is the worst it’s been in a while, according to Michigan Department of Transportation Director Kirk Steudle. Image: Wikimedia Commons

This spring’s “breakup” of Michigan roads has been the worst Kirk Steudle has seen in his 31 years with the Michigan Department of Transportation.

“The winter we just had was one of the most brutal that we’ve had” for weather that causes crumbling pavement and potholes, said Steudle, the department’s director.

He has seen colder winters, ones with more snow. But when the weather stays cold, it isn’t as bad on the roads as this one was.

“There was a week when it wasn’t above 10 degrees, then the next week it was 60,” Steudle said. “Then we got a rainstorm, we had 4 inches of rain. Then everything froze again. And everything warmed up again. And when all of those happen at the same time, that’s what causes pavements to break up.

“Water is the enemy,” Steudle said. “That is number one.”

Arguably the most significant climatological trend both seasonally and annually is an increase in precipitation, said State Climatologist Jeffrey Andresen, an MSU geography professor.

Last year set a record for the wettest year in Michigan, going back to 1895, Andresen said, with 10 to 15 percent more annual precipitation than just 60 years ago.

The increase results from more “wet” days and more extreme weather events, both of which are increasing with time, Andresen said.

“We have overwhelming evidence that is happening, and it is consistent and widespread across the state and the region,” Andresen said.

Although MDOT has no official position on whether climate change is causing more unfavorable weather for roads, its officials know there have been more extreme weather events, and they must consider that shift in their infrastructure planning, MDOT Director of Communications Jeff Cranson said.

“We have not performed a statistical analysis, but one is not necessary to be aware that the numbers, especially for flooding in local areas, show that multiple events beyond the 100-year storm event have happened in the last 10-20 years,” Cranson said. “The freeze-thaw cycles at least appear to be more acute due to the increasing number of poor pavements that must survive the forces created by fluctuating temperatures.”

MDOT maintenance engineers have met with a Michigan State University climatologist twice over the past four years and have concluded that the trend is for Michigan weather events to be more extreme overall, Cranson said.

“Two of the past three winters have been somewhat unusual in that we have had more than the average amount of warmer days, especially during the second half of our winters,” Cranson said. “That creates ideal conditions for pavement deterioration, known colloquially as potholes.”

Andresen said there’s a clear long-term trend toward milder winters in Michigan and the Great Lakes region that’s been unmistakable for the last three to four decades.

That doesn’t mean we don’t have cold winters, such as in 2013, said Andresen. However, Michigan is getting warmer, and a significant chunk of that warming occurs during the cold season.

Andresen said the number of freeze-thaw cycles has actually been down overall in the last decade or so, though he is not convinced the data for the Lansing area are accurate and he’d like to see other locations tested.

“I would’ve expected the opposite, to be honest,” Andresen said.

Andresen said the discrepancy might be because of the way weather scientists define freeze-thaw cycles: days when the high temperature is above freezing and the minimum temperature is below.

Many factors go into measuring freeze-thaw cycles accurately, said Samantha Basile, a climate and space sciences and engineering Ph.D student at the University of Michigan. Basile’s basic definition of a freeze-thaw point is when the daily temperature experiences a low of 31 degrees or less and a high of 33 degrees or more.

However, discrepancies between roads can make this harder to accurately measure. Unsalted roads will freeze at a lower point of 28 degrees and thaw at 34, Basile said. Salted roads do not freeze until a low of 26 degrees.

Michigan’s “freeze-free” period could be increasing, meaning there’s more days where the weather does not go below 32 degrees at all. Multiple shifts between freezing and thawing temperatures within a day could also go unrecorded if only daily minimum and maximum temperatures are being used, she said.

Though the extreme weather trends could be coincidental, they are consistent with many climate change projections for the near and longer-term future in Michigan, Andresen said.

The connection between climate change projections and Michigan’s unfavorable road weather is “certainly possible, and I think it’s important to note that those two are in agreement,” Andresen said.