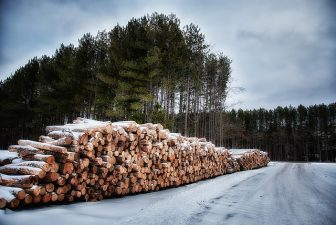 A Michigan state program that more than tripled the private land managed for forestry in just three years earns unusual praise from both forest products producers and environmentalists.

If there is one thing the two groups agree on, it’s that both of their preferred uses “are better than subdivisions,” said Marvin Roberson, a forest ecologist with the Michigan chapter of the Sierra Club. “If you got 160 acres and your only choice is to sell to a subdivision because you can’t afford the taxes, this keeps it in forested land.”

The Qualified Forest Program gives tax breaks to landowners who agree to manage their forests under a plan developed by a state-certified forester. The plans help them harvest their land sustainably, but they also can consider how to better provide for wildlife or keep invasive species from overtaking the land.

“I think a tremendous amount of wood has been put up as a result of this,” said Scott Robbins, the director of the sustainable forestry initiative and public policy for the Michigan Forest Products Council. “We’re pretty pleased.”
State officials say increasing the incentives to enroll resulted in the number of acres in the program growing from more than 96,000 in 2013 to more than 300,000 by the start of 2016.
During the same period, the value of the timber harvested through the program rose from about $175,000 to almost $3.2 million.

Right now, those owners are harvesting at about a third of the rate of growth, Harlow said. “So two-thirds of it goes beyond the useful age. People don’t manage it for use.”
It’s no surprise that the counties with the most land in the program are in the north.
“It’s where the forest is located — the Upper Peninsula and northern lower part of the state,” Harlow said.

At the same time, the program was moved from the Department of Natural Resources (DNR) to the Department of Agriculture and Rural Development (MDARD). That’s where the environmentalists and forest products industry officials disagree.

“MDARD is doing a great job of rolling this thing out,” said Robbins of the Forest Products Council. “They had great success in getting people to enroll in it.”

But the Sierra Club’s Roberson said: “The Department of Agriculture has no history or experience in the management of forests. The DNR— you can like or not like their management— but they have a long history and lots of experience on how to manage forestland.”

Part of the reason for the tax breaks is that vacant forestland requires fewer services — roads, schools, sewers – than cities and towns.

The program has potential for yet more growth, Harlow said. Wisconsin has similar forests to Michigan’s and a tax incentive program that is much older.

“They harvest at the rate of growth,” he said.

To be eligible, Michigan forested parcels must be between 20 and 640 acres. Applications must be submitted by Sept. 1 to be considered for a tax exemption the following year. More enrollment information is available here.