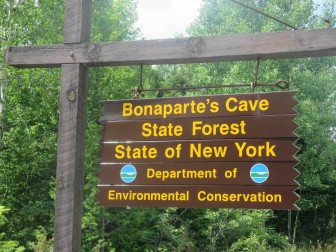 It’s a long way from Paris to the western outskirts of the Adirondack Mountains, and thus a surprise to spot a New York Department of Environmental Conservation (DEC) sign for Bonaparte’s Cave State Forest.

Bonaparte? As in Napoleon Bonaparte? If so, what was the former emperor of France doing in Northern New York, about an hour’s drive south of the St. Lawrence River?

“Local legend, along with some historical fact, has it that Napoleon Bonaparte’s brother and his family escaped from Europe to this area after his famous brother was arrested,” according to DEC. “It is said that they eluded hired assassins by hiding out in the rocky ledges and small caves on the northwest edge of what is today known as Green Pond.”

That brother, Joseph, had been crowned king of Sicily, Naples and Spain by the ill-fated Napoleon, titles he was not destined to hold for long. He fled to the United States, reportedly accompanied by the purloined crown jewels of Spain.

A 1939 book about the history of the Bonaparte family in America offers this account: “At the time of one of Joseph’s visits, about 1830, natives say, a friend and companion of Bonaparte fell in love with a girl, likewise French. We do not know their names now, only the fate that befell them. The local legend has it that they never returned from a boat ride which they took one day, and their friends supposed that they drowned. A score of years later, however, hunters found two skeletons in the Green Pond cave, together with a gold piece of Napoleon and sufficient evidence in addition to identify the dead lovers. 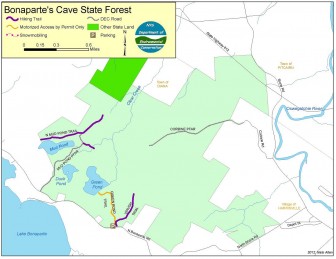 “It never was known whether they were the victims of wild animals which had dragged them to the cave, or of a suicide pact. Since suicide is deemed romantic, that is the more popular local theory, though the cave is said to be the old-time haunt of Adirondack panther and bear.”

Today, the 1,435-acre state forest is better known for its fishing — a state record-sized brook trout was hooked here in the 1990s — hunting and canoeing than for its tangential and possible apocryphal ties to history. Artisans use black ash from the forest for basket-making.

The family name of Napoleon’s kinfolk also pops up at nearby Lake Bonaparte, which offers a public beach and boat launch, as well as fishing for smallmouth bass, northern pike, brown trout, yellow perch, brown bullhead and cisco.

Of course, it’s not unusual for people to tag natural features with imaginative names.

The National Park Service retells a Native American legend this way: “Long ago, along the Wisconsin shoreline, a mother bear and her two cubs were driven into Lake Michigan by a raging forest fire. The bears swam for many hours, but eventually the cubs tired and lagged behind. Mother bear reached the shore and climbed to the top of a high bluff to watch and wait for her cubs. Too tired to continue, the cubs drowned within sight of the shore. The Great Spirit Manitou created two islands to mark the spot where the cubs disappeared and then created a solitary dune to represent the faithful mother bear.”

For almost two centuries, a 40-foot-tall granite formation in the White Mountains of New Hampshire was known as the Old Man of the Mountain because it resembled the profile of a man’s face.

Daniel Webster wrote of this glacially carved formation: “Men hang out their signs indicative of their respective trades; shoemakers hang out a gigantic shoe; jewelers a monster watch, and the dentist hangs out a gold tooth; but up in the mountains of New Hampshire, God Almighty has hung out a sign to show that there He makes men.”

Granite Staters were so enamored of this tourist icon that they made it the official state symbol and put it on their license plates.

But then came May 3, 2003, when the Old Man collapsed, the victim of freezing and thawing that cracked his forehead and sent his face tumbling, icon no more.