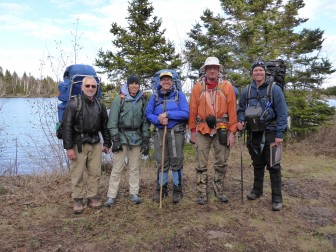 This time she is hiking, biking and kayaking on islands in each of the five Great Lakes. Read about it here LINK.

Her third book, tentatively titled A 1,000-mile Great Lakes Island Adventure, is scheduled to be released in June 2015. But she’s agreed to share with Echo readers this early look at the introduction:

I knew I wanted to explore islands in every Great Lake and some of the choices were obvious:

The St. Lawrence River at the east end of Lake Ontario is loaded with islands (the Thousand Islands) and I wanted to kayak among them.

The Manitou Islands (North and South) in Lake Michigan are part of the Sleeping Bear Dunes National Lakeshore and I wanted to explore them more. I had also never been to Washington Island at the tip of the Door Peninsula in Wisconsin, so I was determined to get there.

The Lake Erie Islands north of Port Clinton, Ohio, were the staging area for the Battle of Lake Erie in the War of 1812. In 2013 — the bicentennial of this event — there would be a reenactment of this historic battle, and I wanted to get to the islands to take part in it.

So, these choices would take me to every Great Lake. From there I had some other considerations. I wanted to explore and even take part in research projects on the islands, so I contacted the scientists in charge of these endeavors. I wanted to explore both remote islands and inhabited island communities, both near shore islands and remote landmasses only accessible by a long boat or plane ride.

If I didn’t get to your favorite Great Lakes island, I apologize. Visiting all of them would have taken several lifetimes.

All of this adventure took place between May of 2013 and October of 2014**. I explored the islands of Lakes Erie and Michigan in 2013, and Lakes Superior, Huron and Ontario in 2014.

I will group the islands by the lake in which they reside. This book will be more episodic than my first two books. Islands are isolated land masses, surrounded by water. They are, by their very nature, episodic.

I will kayak amongst some groupings of islands, passing in that space between them atop the very substance that makes them islands. Some of the islands I will visit are large enough to contain their own small lakes. Manitolin island is large enough to have over a hundred lakes on it. Some of these island lakes, in turn, have islands in them.

The islands I explored varied in size from 8 acres (Cana Island in Lake Michigan) to almost 700,000 acres (Manitoulin Island in Lake Huron). Only a couple of these islands were attached to the mainland by bridges, most were accessible only over water. The flora and fauna on each island varied greatly.

The larger the island, the greater the diversity of life found there. This is a general rule, but it makes sense. The larger islands will have more diverse habitats that will support a greater variety of life. Islands are also dynamic, isolated places. Scientists love to study life on islands because they are relatively isolated system. Birds and bats, of course, can come and go, but other life is more restricted. And with the increasingly warmer temperatures in the Great Lakes Basin, there is less ice on the lake and fewer opportunities for land mammals to get on or off the islands using these temporary icy connections with the mainland.

Darwin formulated his theories of species diversity and natural selection while visiting the Galapagos Islands in the Pacific Ocean off the coast of Ecuador. The species on each island had adapted to the specific conditions on each island. Each rocky piece of that archipelago — the term for any large grouping of islands — had a unique set of inhabitants who survived and procreated because they had some slight difference in their genetic makeup that gave them a competitive advantage over the rest of their kind. Over many generations, these differences were “selected” by the constraints of the environment leading to new, emergent species populating each island.

If this sounds strange, think about the people under 40 years old living in your community: tall and short, some wear glasses while some don’t, some are fast runners while others are better long-distance walkers. There is variation in that population, right? Now, if you took all those people and put them on an island that also had a group of hungry cougars on it, you would, over time, select for the people who could evade the cougars. They might do that by being fast, or maybe by just using their wits to build strong shelters and weapons, or maybe by having an exceptional sense of smell to warn them about the smelly cougars. Only the surviving people would be able to pass their genetic makeup to their kids. The cougar pressure on the population would “select” for certain traits, let’s call them “NOT-cougar-dinner” traits. And these “NOT-cougar-dinner” traits, if passed on to the offspring of the survivors, would become prominent in the surviving population. If you visited that island a thousand years later, you’d find a very different population of people then if those same people stayed in your community for a thousand years without the cougars munching on them.

This is what happens to all creatures in island communities. They must adapt, respond, and find a niche in which to live. Sub-species of creatures develop on islands like the Lake Erie Water Snake. This snake has adapted to life on this small group of islands. There are some plants found on Great Lakes islands that are found nowhere else on earth, and some of these islands act as small oases where plants threatened elsewhere may thrive. Isle Royale, alone, is host to over 40 species of plants that are endangered or threatened.

On islands hosting human settlements, I interacted with the people who had chosen a life with watery edges, of isolation and self-reliance. I will introduce you to them.

This journey challenged me in new ways and made me look at life off the mainland, afloat on the lakes. Join me, won’t you?

Walk, kayak, bike and boat with me once again on this island adventure…