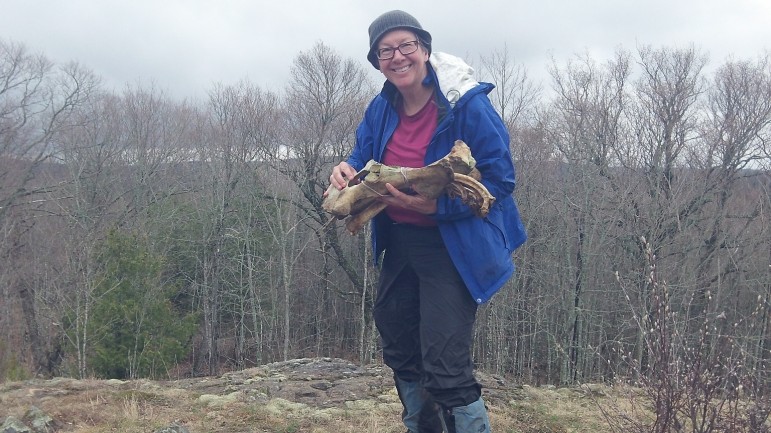 Loreen Nienwenhuis with  bones collected as part of the Isle Royale wolf-moose study.

When Battle Creek resident and Michigan native Loreen Nienwenhuis started on her first 1,000-mile hike, she focused on the first 70 miles of a trip that would take her around Lake Michigan.

Not thinking any further ahead, she said, made her travels easier to contemplate and prevented her from changing her mind. 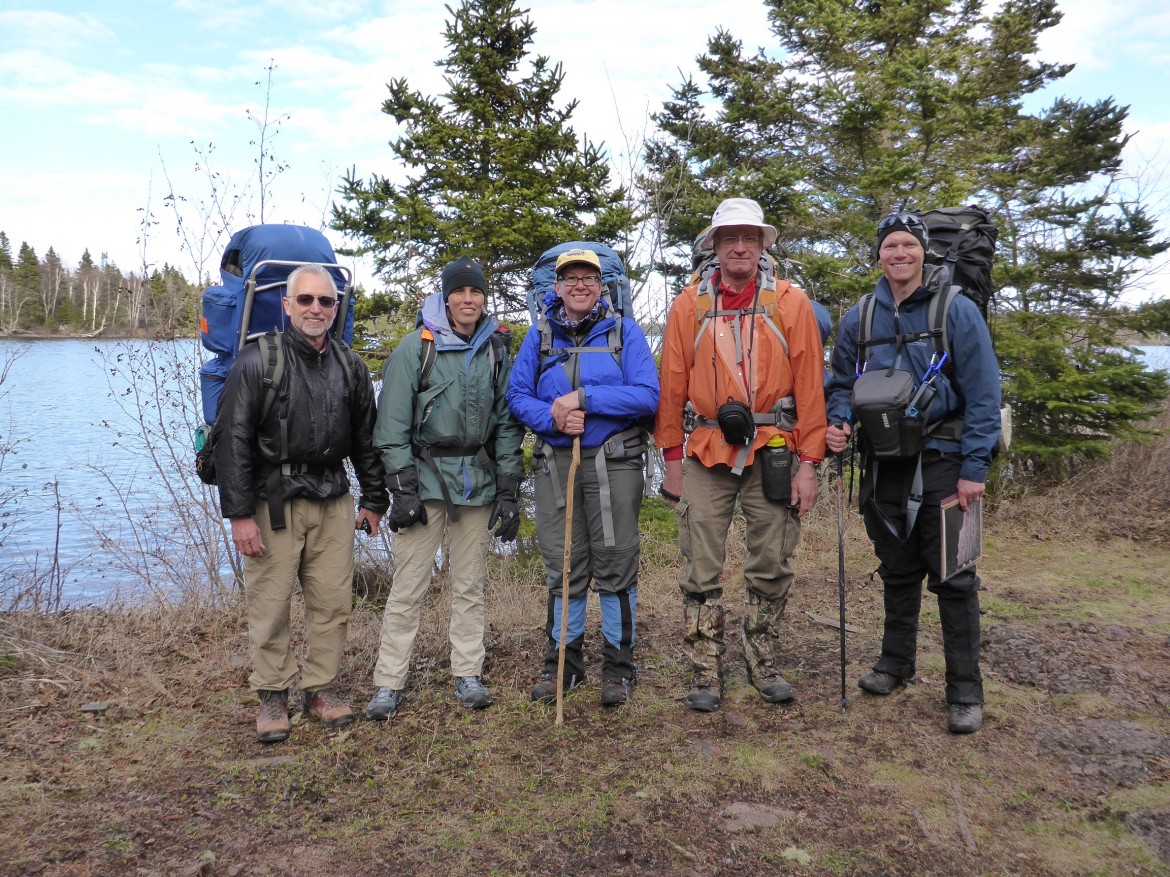 With more than 35,000 Great Lakes islands, Niewenhuis had to be choosy about where to spend her next 1,000-mile walk. Niewenhuis decided she wanted to travel to islands in each of the five lakes, and picked a handful after some research. She decided to hike, bike or kayak around some of the best-known: Isle Royale, Manitoulin Island, Thousand Islands, North and South Manitou Islands, Washington Island and Lake Erie Islands. She hiked with a team of researchers on Isle Royale in search of moose bones for the Isle Royale wolf-moose study. Washington Island and both North and South Manitou Islands are in Lake Michigan, Manitoulin Island is in Lake Huron, Isle Royale is in Lake Superior, Lake Erie Islands are in Lake Erie and Thousand Islands are in the St. Lawrence River.

As part of her travels on Isle Royale, Niewenhuis joined a moose watch expedition collecting moose bones. Researchers from the Isle Royale wolf-moose study can then use the bone collections to study how the moose populations on Isle Royale live and die.

“The scientists there have been studying the interactions with wolves and moose, and it’s the longest running wildlife study ever done,” Nienwenhuis said. “The hiking was the most rugged I’ve ever done! We were hiking off trail, since the moose don’t tend to get killed on the trail.”

After spending a week camping and hiking on Isle Royale, Niewenhuis remains fascinated by the study.

“One thing [researchers] have been able to publish is that early nutrition for the moose, depending on winter severity, will predetermine their health when they get older,” Niewenhuis said. “They’ve found the correlation in nutrition is just as strong for people.”

Niewenhuis began her first journey around the perimeter of Lake Michigan in 2009. That up close look at 1,000 miles of coastline prompted her to write a book. And it wasn’t enough.

“When I did my first adventure I just wanted to share the beauty of Lake Michigan, but I was also astonished how we continue to abuse our Great Lakes,” Niewenhuis said. “There were many toxic sites, some that were cleaned up and some that weren’t.”

After publishing her first book, Niewenhuis decided to set out on a second adventure, hiking a total of 1,000 miles on parts of each of the five Great Lakes. It was during that journey that she set her sights on this third adventure on islands.

Her favorite stretch of landscape so far is Sleeping Bear Dunes, but Isle Royale is a close second. 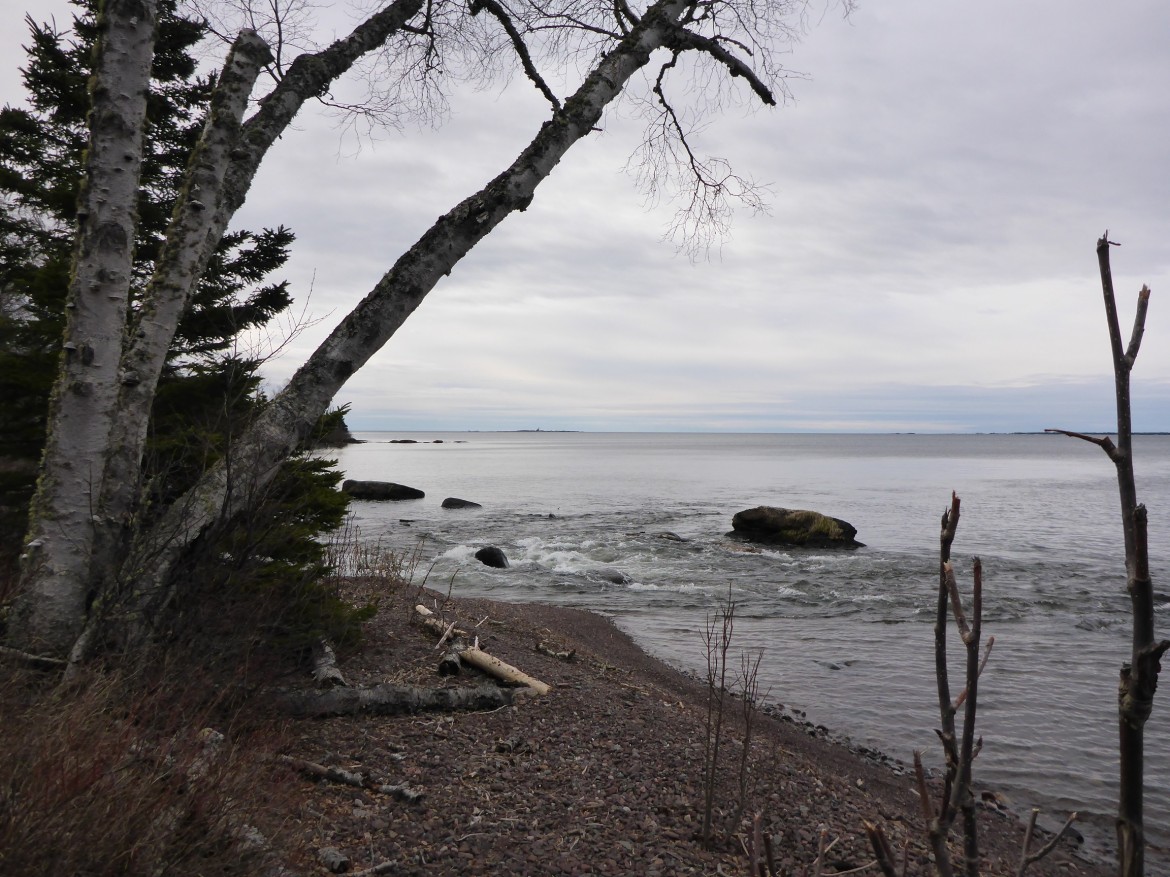 A goal in writing this trilogy of Great Lakes adventures is to educate readers on regions they may never have traveled. When not trekking the rugged coastal terrain, she does speaking engagements on the ‘toxic legacy’ of the Great Lakes.

Though her mileage may be daunting for anyone interested in a similar trek, she said that the most difficult challenge is surmounting your own mental block.

Her advice for those who dream of adventuring: “I’ve met many people along the way. I meet people that say ‘I meant to do… ’. I encourage people to make room in their lives for that adventure that calls to them. It’s fine to have a goal, like I want to spend a week in my favorite place exploring. Just make room for that thing that calls to them. It won’t stop calling to them, but they may not always be able to complete it.” 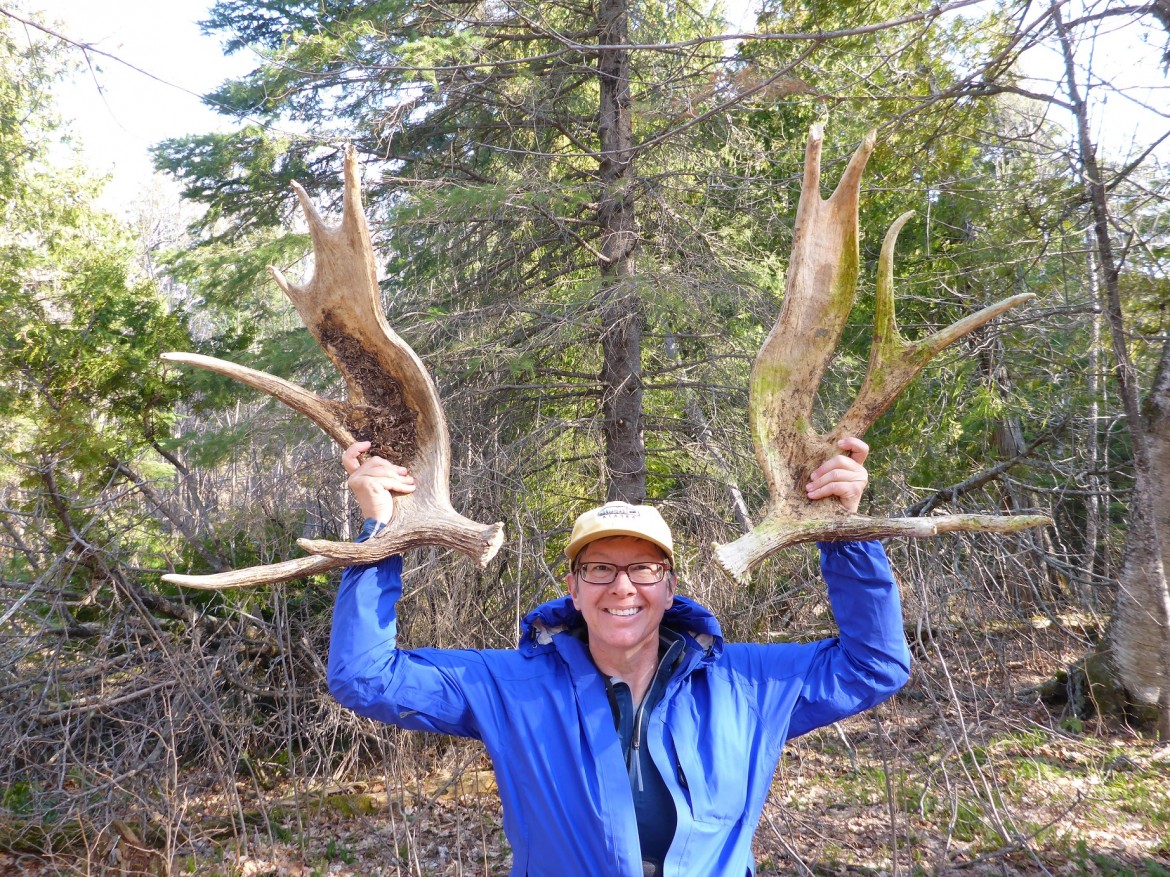 Loreen Niewenhuis holding up moose antlers from her expedition with the Isle Royale wolf-moose study.

Niewenhuis’ third book, tentatively titled A 1,000-Mile Great Lakes Island Adventure, is scheduled to be released in June of 2015. She is about halfway done with the groundwork, expecting to reach the 1,000-mile mark in Oct. 2014. Her previous books can be found on Amazon and select independent book stores.

Meanwhile, track her progress and adventures on her lake trek blog.

And get an early peek at the introduction to that book here.