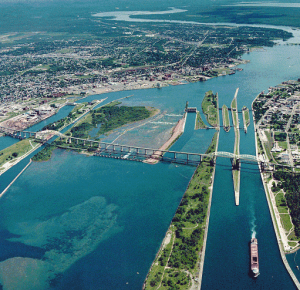 The record-breaking ice on Lake Superior is bad news for the steel industry but not for tourism in some parts of the Upper Peninsula.

The Sault Ste. Marie locks opened Tuesday as they do every year on March 25. But this was the first time since 2009 a boat didn’t pass through the very same day.

The lack of boat traffic in 2009 was due to economic reasons. This year it is because of the ice, said Mark Gill, the U.S. Coast Guard director of vessel and trafficking services in Sault Ste. Marie.

No boats passed through the locks on opening day because they hadn’t reached them yet. They are still trying to make their way across frozen Lake Superior. The delay could threaten jobs in industries that rely on transportation of raw materials across the Great Lakes, Gill said. Those are industries that rely on iron ore that is shipped from Duluth, Minn., to steel mills in Detroit and areas along Lake Michigan. If the boats are delayed another two weeks, workers at steel mills could be laid off, Gill said.

The limestone industry is another industry that relies on Great Lakes freighters. According to steel companies, limestone is used to remove impurities from molten iron and without it, removing impurities requires a more expensive process that could lead to job losses, Gill said.

A ship that recently passed through the St. Mary’s River took eight days, said Linda Hoath, executive director of the Sault Area Convention and Visitors Bureau. It normally takes a ship 12 hours to go through the river.

Gill said the Coast Guard simply does not have enough resources to escort boats between the Great Lakes this winter. The U.S. and Canadian Coast Guards share 11 icebreakers in the Great Lakes Region—not enough to accommodate the extreme weather. They are usually only used to take boats across St. Mary’s River between Lake Superior and Lake Huron during the winter. This year however, icebreakers have had to escort ships the entire way across the frozen lakes.

“There are three boats out [in Lake Superior] right now with two icebreakers,” Gill said.

Glen Nekvasil, vice president of the Lake Carriers’ Association, said the Coast Guard can’t meet the demand of the industries.

“This is an extremely difficult situation,” he said, “We asked for more [federal] funding for icebreakers. They said we had adequate resources and now we don’t and I’m not denying that this is a bad winter, but now we need them now.”

Things are looking up.

Although the iron industry is getting the cold shoulder, this year’s winter is showing its softer side to tourism in some parts of the Upper Peninsula.

Tourism in Sault Ste. Marie during the first two months of this year went up 3 percent from last year, Hoath said.

Pat Black, director of the Marquette County Convention and Visitors Bureau, said tourism in Marquette is up about 5 percent from last year. “We keep track of it by counting hotel rooms,” she said. “We are up from last year.”

“A lot of our visitors that normally come are from areas that are seeing subzero temperatures this year,” he said. “No one in Lansing is going to say, ‘hey, let’s go Up North this weekend’ when it’s so cold down there they don’t want to leave their apartment.” The cities that are doing well usually have events or a recreational activity to attract people, he said.

This seems to be the case in Marquette since snow biking, a relatively new sport, became popular this year, Black said. “Biking is just a way of life up here and now people are starting to do it year round,” she said. People are even taking their bikes onto Lake Superior.

“You have the rising water levels that are going to create more opportunities for fishing,” she said, “and more boats are going to start coming through that people are going to want to see. It’s going to be a really good year, I can feel it, trust me.”

One thought on “Icy lakes made some towns, businesses winners or losers”