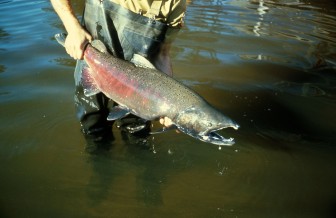 The Wisconsin Department of Natural Resources has announced a proposal to allow nonprofit groups to place net pens in Lake Michigan, Lake Superior and their tributaries to increase the fish population there for recreational anglers.

The DNR normally raises fish at its own hatcheries before releasing them into the lakes. A new law passed last year allows nonprofit organizations to raise fish themselves, and the department is seeking public comment on a general permit to allow them to do so.

Michigan and New York are the only other states to allow such pens.

The general permit is intended for local sport clubs and fishing organizations, said David Boyarski, the Sturgeon Bay-based fishery supervisor for northern Lake Michigan at the DNR. No group would be allowed to raise fish for food or commercial purposes.

The purpose of the permits is to provide more fish for anglers, he said.

Prior to the legislation, the law did not allow new fish farms, said Boyarski, and the DNR allowed groups to keep fish only for up to two days without feeding them. If the fish were fed or kept for longer than two days, the pen would be considered an illegal farm.

The new permits will allow organizations to legally keep fish in a pen for a longer period of time and to feed them.

Fish would be transported to a net pen the same way as fish are taken to the DNR’s hatcheries, said David Geihtbrock, the DNR statewide fish production manager. The fish would be carried by truck to a pen and piped into the water. The fish would be kept in the net pens for one to three weeks, which would give them more time to acclimate to their environment while avoiding predators.

“The fish will be fed the same amount as fish in our own hatcheries,” said Geihtbrock.

Water level, temperature and pH would be measured to ensure the water remains safe for fish.

Boyarski said that mainly trout and salmon would be raised in the pens. Trout and salmon imprint on the chemical signatures of the tributaries they live in., and the pens would allow more time for the fish to imprint and adapt to the lakes.

The DNR is holding a public comment period through March 14. Afterwards, the DNR will finalize the requirements for permits and begin accepting applications, said Martin Griffin, the department t’s statewide waterway science and policy leader. The application fee would be $300.