At a time when U.S sources of mercury into the Great Lakes are dropping, the volume of the same pollutant coming from China is on the rise, experts say.

China is second to the U.S. in terms of contributing mercury into the Great Lakes basin, according to scientists from the National Oceanic and Atmospheric Administration. 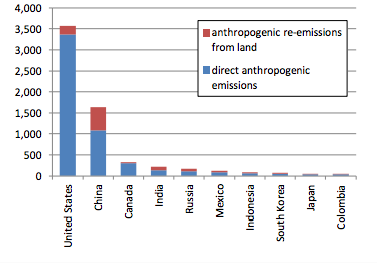 “Mercury is known to be a pollutant capable of long-range atmospheric transport and its is not surprising that some of the mercury emitted in China and elsewhere around the world ends up in the Great Lakes,” said Mark Cohen, a physical scientist at the federal agency.

Mercury can affect human health by harming the central nervous system, brain, heart, lungs and immune system. Young children and developing fetuses are most sensitive to mercury that can harm their ability to fully function later in life.

It is mostly emitted by coal-fired power plants, gold mining and natural emissions. Mercury-related health advisories around the Great Lakes limit how much of certain fish people should eat because they are contaminated by the element. 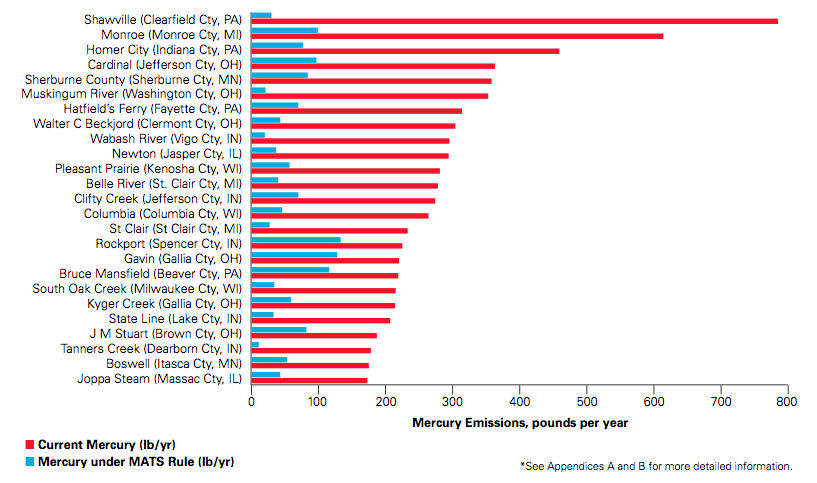 For two years Cohen and his colleagues researched the amount and source of mercury loading to the Great Lakes. They modeled with computer programs the mercury deposition from different countries. They used data collected by mercury monitors in Sleeping Bear Dunes along Lake Michigan, Burnt Island in Lake Huron, Sturgeon Point along Lake Erie, Eagle Harbor on Lake Superior and Peter Point in Lake Ontario. They also used information from several monitoring stations outside of the region.

Models can determine the atmospheric transport of mercury emitted from each source and track its impact on the Great Lakes, Cohen said.

Scientists discovered that U.S manmade mercury sources account for 32 percent of the mercury entering the Great Lakes. Chinese sources deposit nearly half as much with 14 percent. 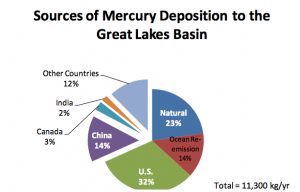 Other countries in decreasing order of mercury contribution are Canada, India, Russia, Mexico, Indonesia, South Korea, Japan and Colombia. Together they account for an estimated 15 percent of the mercury entering the Great Lakes.

About one third of the mercury coming into the lakes comes from natural sources such as volcanoes and the weathering of mercury-containing minerals. A detailed report with the initial findings was released last December.

“The results were reasonably consistent with the data from mercury measurement sites and this gives a certain level of confidence in the modeling results,” Cohen said.

The scientists are working on a second phase of the project called a sensitivity analysis which further verifies the accuracy of the modeling, Cohen said.

Meanwhile, the first phase indicates that mercury emissions from China mainly come from mining, metallurgy and the burning of coal to produce electricity.

The airborne mercury migrates across borders and eventually ends up in the Great Lakes, posing public and wildlife health concerns, Cohen said.

China also leads the world’s “chart” of global manmade mercury emission with 42 percent, said Tim Kasten, deputy director of the United Nations Environmental Program’s Division of Environmental Policy Implementation based in Switzerland. The U.S follows it at 15 percent and India at 10 percent.

“Mercury emission is not a local but a global issue that needs global action,” Kasten said. “Unfortunately for Chinese people, they use significant amount of coal for industry operation and residential heating that causes global problems for them.” 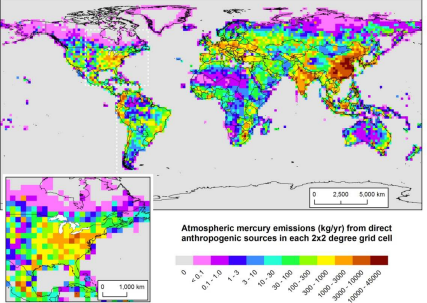 For countries like China, Russia, Mexico and India it is a very difficult to control emissions because of limited funds for pollution control, Kasten said.

“It aims to facilitate the governments’ efforts to come together, have discussion and provide proposals to develop the treaty,” said Kasten.

The U.S has already developed programs to foster assessment and specific improvements in mercury reduction in China, India, Russia and other countries, according to the EPA. And it provides technical and consulting support to such projects.