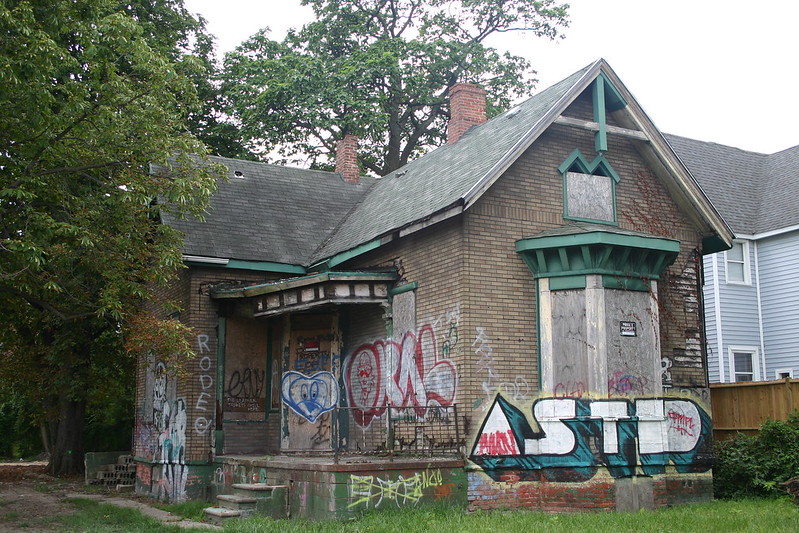 You won’t find barns and silos in Detroit.

Or herds of cattle. Or fields of soybeans, sugar beets or wheat.

Even so, much of the city is now “ruralized,” a new study says, a phenomenon also visible in Flint, Pontiac and Saginaw.

“The argument is not that Detroit is a rural place,” a Michigan State University research team wrote. Instead, the question is whether economic development measures used in rural areas may be effective in Detroit and other shrinking cities, many of which depended heavily on manufacturing jobs such as those in the auto and steel industries.

But the urban economic development techniques that Detroit has been using haven’t worked “in the neighborhoods for the broad range of citizens who live there,” said coauthor Laura Reese, a professor of urban and regional planning and global urban studies.

In contrast, rural economic development focuses more on “improving human and community capital, governance and resilience,” the study said. That may include workforce and vocational training and better telecommunications services to reduce unemployment and increase access to information.

“I’d like to see a focus on building on the bottom up instead of continually using tax abatements and other incentives to lure business and hoping it will trickle down,” she said.

The study said the emphasis has been on downtown and midtown Detroit, “creating attractions and entertainment venues that bring in tourists and visitors from the suburbs and developing new hip businesses.”

“The hope is these benefits will trickle down – or out – to other areas of the city. But the reality is they have not,” said the study, “The Ruralization of Detroit? Implications for Economic Redevelopment,” in the journal Theoretical and Empirical Researches in Urban Management.

It highlighted some major differences between the two types of areas.

The study describes “extreme economic stress for Detroit residents” with lost jobs and high unemployment: “Large areas of Detroit’s east and northwest sides have become derelict and abandoned,” with an estimated 23% of housing units, 36% of commercial parcels and 22% of industrial properties vacant.

So, what makes Detroit “ruralized?”

The study said Detroit wouldn’t be classified as rural based solely on total population and population density. Instead, housing vacancy rates, household income, level of education and lack of diversity in local industry are reasons for that classification.

“Rural areas tend to have higher percentages of vacant housing than urban areas,” it said. Detroit’s average vacancy rate is almost triple the national urban average, and 85% of the city’s census tracts had rental vacancy rates at or above the national average.

“Rural places tend to be worse off financially than urban places,” it said. Detroit’s average household income fell substantially below both urban and rural national averages, and 94% of census tracts could be classified as rural based on household incomes.

As for educational levels, about 85% of Detroit census tracts fit the rural classification because less than 20% of city residents having at least a bachelor’s degree.

“Rural places tend to have less diversity in economic activities,” About 61% of Detroit census tracts would earn a rural classification on that basis, the study said.

The study suggests that “ruralized” cities like Detroit move toward “human capital development” policies designed to deal with problems in rural communities, such as more investment in schools, job training, entrepreneurship training and small business loans for startups.

Coauthor Mark Skidmore, an MSU economist, said, “As you know, there is no silver bullet. There are little gems throughout the Great Lakes region of rural communities that have managed to thrive despite the general downward trend in rural population.”

As an example, Skidmore points to Pewamo-Westphalia, in Ionia and Clinton counties northwest of Lansing.

“Two smaller communities collaborated to build one viable school (with a) very strong agricultural base, but no above-average natural amenities. And still they manage to retain their families and build a really nice small town that is viable. Nothing fancy – just nice. And their kids seem to thrive.”

He said, “What is less clear is what specific policy actions may have helped.” And he acknowledged that “languishing rural communities” outnumber thriving ones in the region.

There’s also the challenge of convincing urban policymakers to take a long view and try a different strategy.

Reese said, “I’ve been trying to get this message across. It hasn’t had a lot of traction, largely from political folks – mayors and council members. Their timelines are short because they run for election.”