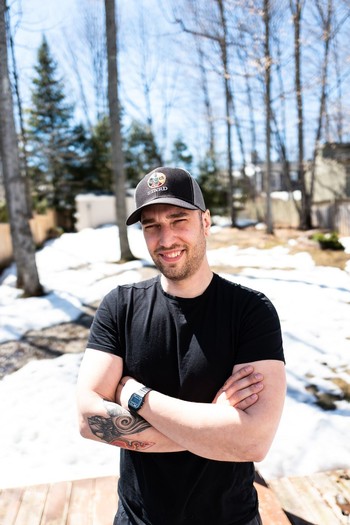 When Michigan State University graduate student Jared Gregorini studies in the forest, he often leaves a tobacco plant in it before he starts.

This is because Gregorini, also known as Leading Crow, is a Native American.

Before becoming a biological conservation researcher, he worked with the Sault Ste. Marie Tribe of Chippewa Indians as an assistant biologist.  He is from Ontario, but his research focuses on Michigan’s eastern Upper Peninsula, an environment similar to Ontario’s.

The plant Gregorini gives to the forest is usually tobacco, which is sacred to his Native American community.

Many Native American cultures view the forest as a sacred, Gregorini said. It is a tradition to offer the forest tribute after taking something from it, such as berries or hunted animals.

Gregorini believes gathering knowledge is no different from gathering physical resources. And he doesn’t see ancient Native American spirituality as incompatible with modern science. In fact, he believes in mixing the two together.

So does his research adviser, Gary Roloff.

“We’ve seen a lot of literature over the years about integrating Western and Indigenous sciences to help better conservation,” Roloff said. “But I think we’ve struggled with what exactly that looks like and one of the things I’m hoping that will come out of Jared … is how to most effectively to use indigenous sciences as part of a Western experimental design here.”

Gregorini’s research focuses on how removing fire from an ecosystem affects it and how “prescribed fires” can influence it.  Fire managers may “prescribe” a treatment for resource benefits or research. Including  lighting a fire in an area after planning and under controlled conditions, according to the National Park Service.

A prescribed fire is also often known as a controlled burn.

Regular wildfires are extremely beneficial to the forest, specifically when blueberry plants burn, Gregorini said. When a wildfire ends, the area will often be filled with blueberries the following year, which attracts many new animals.

This practice was common among ancient Indigenous peoples as a way to attract animals to hunt as well as to renew the ecosystem, he said.

Gregorini said he has always had respect for the forest and feels it is his responsibility to give back to it.

Part of the Anishinaabe belief is that when you are studying on the land you should give thanks to the land for being the teacher, Roloff said. “That’s a very ‘Indigenous’ (way) to look at it, versus the Western way where you just go and put a bunch of experiments on the land and then take information from the land, instead of the land being a teacher.

“Having Jared being kind of a teacher was actually really kind of eye-opening for me. It’s a different way of viewing data collection,” he said

Other researchers under him are beginning to incorporate Native American spiritual practices into their research, Roloff said. It’s a shift he attributes to Indigenous researchers like Gregorini.

Native Americans are one of the least likely groups to attend a higher-education institution, with only 17% continuing their education after high school, according to a Postsecondary National Policy Institute Study.

Gregorini hopes to change this.