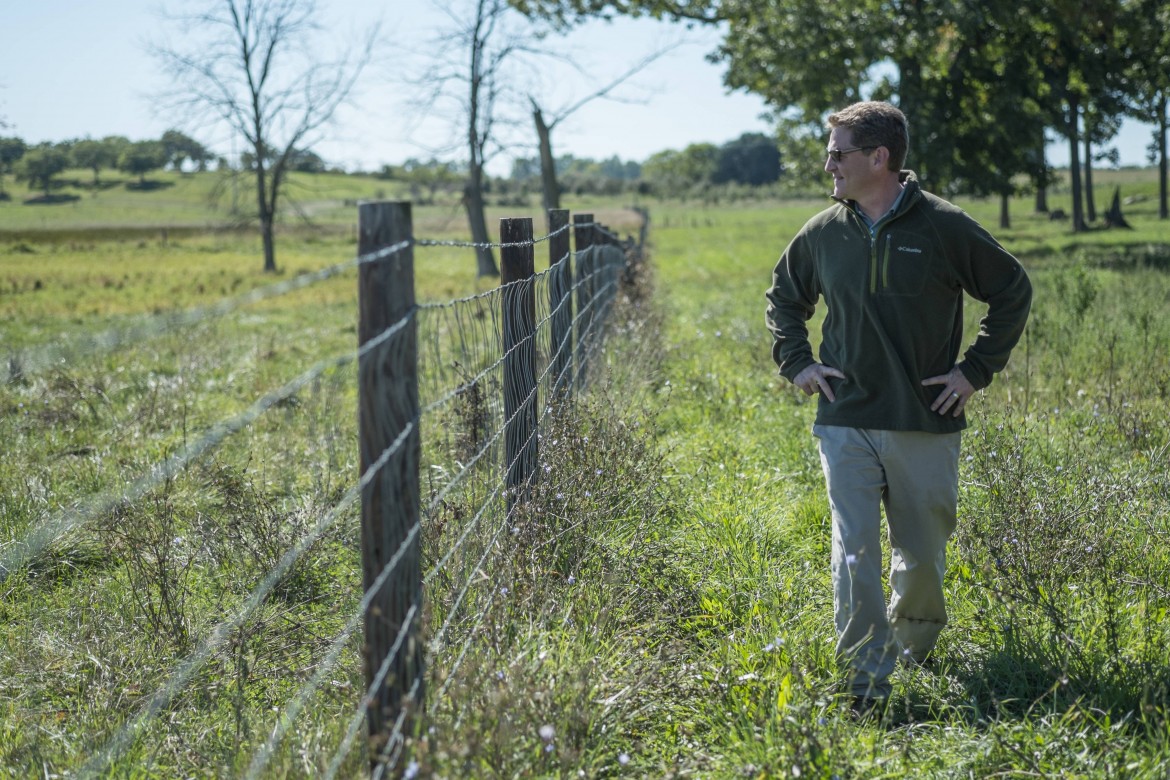 Economic profitability, environmental friendliness and getting people to eat frozen meat  are keys to the future of Michigan’s beef industry, according to Michigan State University researchers.

Cattle raised on grass could bring together all three. A team of researchers led by Jason Rowntree, an assistant professor in the MSU Department of Animal Science, will explore that potential beginning this summer with a $460,000 federal grant.

Such “grass finished cattle” produce leaner cuts that are rising in consumer demand. And one farmer says grass finishing can extend cattle lifespans and give them a “happier” life.

Rowntree hopes to discover new pasture management techniques and improve existing ones.  He also aims to encourage the consumption of both fresh and frozen meats and promote the use of the entire carcass throughout a year.

Michigan’s wet and cold climate is ideal for grass-raised cattle, Rowntree said. But obtaining grains for the last 60 days of cattle finishing and producing the local fresh meat year round, because of Michigan’s harsh winters, are two mitten state obstacles.

Most beef cattle sold in Michigan are  finished in other states before they go to a meat packer, Rowntree said. In this project, Rowntree will engage local packers and processors to retain more local meats in Michigan’s food landscape.

“Customers want to know where their food comes from and we can do that from (improving) local and regional systems,” Rowntree said. “The bottom line: it adds value to local food systems.”

“We are going to be engaging chefs and culinary experts from Detroit to East Lansing to Traverse City to work on this whole local issue, and of importance is the fresh vs. frozen (comparison).” Rowntree said. “If we can we show chefs and others that a frozen product isn’t bad – if we can do that – then maybe that allows for more overall local product to come through the whole value chain.”

The team hypothesizes that the frozen beef will be equally acceptable as the fresh. Not only will this keep meat more local, it will also encourage producers and consumers to use all parts of the carcass, said Jeannine Schweihofer, a meat quality extension educator at MSU who is collaborating with Rowntree.

Rowntree’s pasture experiments begin July 1 in Lake City, Mich. He will evaluate the beef produced by four different finishing methods: pasture with alfalfa hay, a perennial ryegrass, a cereal grain and brassica mixture, and then a diverse cover crop. He’ll raise the beef and serve the meat to a panel of about 70 taste testers.

There is a “huge demand” for grass-finished beef, which producers are having difficulty in meeting, Rowntree said.

Grass finished beef is often leaner than other types of finished meats, said Schweihofer. It also has a “grassy” taste is preferred by some consumers.

“Grass finished beef is desired by some consumers and we want to be able to produce a more consistent high quality grass finished beef,” Schweihofer said. “And we (can) find out what farmers can do in northern lower Michigan, and have that research available to other farmers so (they can) choose to implement that in their operation.”

Also, from an environmental standpoint, raising cattle on grasses can decrease the greenhouse gases that contribute to climate change by increasing the percentage of carbon in the soil.  This results from the cattle’s continuous grazing. When the grass is grazed down, its roots multiply and more carbon is retained from the atmosphere, Rowntree said.

The team’s intent is to research how to raise Michigan cattle on grass and to teach these techniques to farmers to maintain sustainability and localize the meat food system.

“There is a lot of future in grass finishing,” Rowntree said. “(Its) additional value on the local landscape has the ability to keep more farmers in farming, and that’s what I’m all about.”

Right now many Michigan cattle are at some point raised on grasses, said Michigan Farm Bureau Livestock and Dairy Specialist Ernie Birchmeier. But most are finished in feedlots on grains.

“Grass-finished beef operations are relatively common in South America where they do have a longer growing season and the ability to forage year round,” he said. “It is more conducive in a  warmer climate.”

Consumer preference has been shifting toward a more tender cut of beef, one that has more intramuscular fat, Birchmeier said. Fitting the bill is a grass finished product. 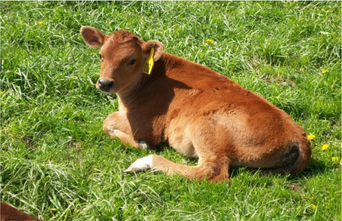 A calf at Luke Meerman’s farm in Coopersville, Mich. Meerman grass finishes all of his cattle. Image: Luke Meerman

Luke Meerman, a grass finishing farmer from Coopersville, Mich., said there are two sides when it comes to deciding whether or not to grass feed the cattle. He said his cows are “happier” during the moderate months outside when they get more exercise from grazing than cattle living only in barns.

Grazing allows the cattle to develop more muscle. But grazing cattle spend more energy which they would not burn if housed in a barn with high energy food, he said.

There is a niche market for grass-finished beef that takes up about 15 percent of the market, Meerman said. There is some risk in grass finishing beef because because it takes about four months longer for cattle to finish, which limits the farmer’s beef pounds yielded per day, he said.

“At the end of the day, it comes down to the customer wanting to know their farm and let them make a decision with their money,” he said. “If they want to pay a little more for their cheese or beef (that’s) great. But if they want the cheapest thing they can get, the animal will probably (have been housed) inside.”

One thought on “Researchers look to spin grass into beef”