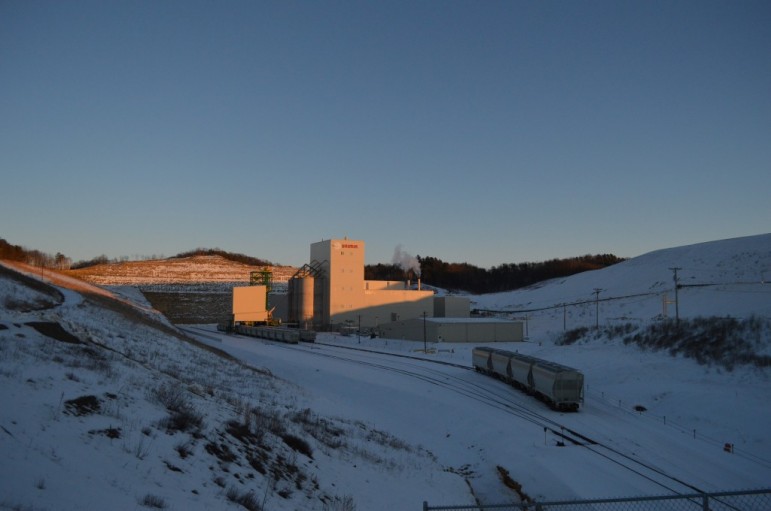 The processing plant and rail loading facility visible from inside the mine gates is tucked into a hill, hiding most of the building from the highway and subdivision to the north. The company has 1,039 acres permitted for mining and has taken steps to reduce impacts on neighbors. Photo: Alison Dirr.

Perry Schmitt describes himself as pro-mining but blames the frac sand mine across the highway from his home for driving down the asking price by more than $25,000, to $189,000.

His neighbors made out better. Kari Curran and her husband sold 130 acres for $1.5 million to a company affiliated with Unimin Mining Corp., operator of the mine. The property was previously valued at about $225,000.

“It was kind of bittersweet,” Curran said. “That was the house we raised our kids in.”

In the three years since Tunnel City area residents found themselves at the forefront of Wisconsin’s frac sand mining boom, economic variations have begun to emerge in western sand-laden communities.

Accessible sand can bring a windfall for some landowners. Others worry that proximity to sand mines is bringing down the value of their homes.

And in some communities, a safety net of sorts is emerging. Efforts to mitigate mining noise and dust, and agreements negotiated with the companies by local governments, such as property value guarantees, can shield neighbors from negative impacts.

Beyond any changes in property values, frac sand mining is reshaping residents’ lives, according to interviews by the Wisconsin Center for Investigative Journalism in western communities. These include Tunnel City in Monroe County, Blair in Trempealeau County, the towns of Pepin and Stockholm in Pepin County, and the town of Howard in Chippewa County.

Wisconsin is the nation’s No. 1 producer of sand used in hydraulic fracturing, or fracking, a process to extract oil and natural gas. It is home to at least 124 permitted or operational facilities to mine, process and ship the high quality sand to other states.

Eleven experts consulted by the Center, including assessors, appraisers and real estate agents, cautioned that it is too early to know precisely how the frac sand boom will affect property values. There have not been enough sales around mines, they said.

Mused Mark Garlick, assessor for the town of Preston in Trempealeau County, “The next buyer is going to tell you what (the property) is worth.”

Welcome to the neighborhood?

For property owners like Schmitt, the sand mine boom has been a bust. He has watched tree-covered hills by his home outside Tunnel City give way to a pile of sand and berms the company built to reduce its visual impact.

“I’m very much pro-mining,” said Schmitt, a military chaplain now based in Utah. “Criminy, I burn gasoline in my car just like everybody else.” But he’s frustrated to be paying mortgage and utilities on his former home. “I can’t sell (it).” He is still trying, hoping for better luck.

For Curran, the sale of land has created new opportunities. Her family moved into a new home last September.

“We’re living across the street from (the mine) and they have made a big berm,” she said. “It’s beautiful. You can’t tell it’s a sand mine.”

Driving down the highway near Tunnel City, it is easy to miss the combination mine, processing plant and rail loading facility. Unimin, the Connecticut-based company that now owns the land, has 1,039 acres  – or about 1.6 square miles – permitted for mining.

But the company has critics, including those who are wary of its latest six-acre land acquisition north of the highway.

Tim Harmon, a lifelong resident of Monroe County, lives north of the Unimin mine in a home reminiscent of a one-room schoolhouse. He built the home and hoped to retire here, but now he worries that the mine will expand and someday be his next door neighbor.

“From what I understand, Unimin is going north of the highway right now,” he said. “I look out my front door and I see the beautiful ridges, some of the highest elevation in Monroe County. If a mining company is buying property across the road, that might not be there in a few years. And it worries me, worries me sick.”

But Harmon joins other residents and local officials in praising Unimin for the care it has taken to be a good neighbor.

The company created a bat habitat in an abandoned rail tunnel and participated in a habitat conservation plan for the endangered Karner blue butterfly.

“We like to look at ourselves as a responsible sand mining company,” said Steve Groening, Unimin’s regional vice president-operations. “We’ll never claim that we’ll have zero impact on our neighbors, but we do say that we’re going to be responsible in everything we do.”

That can go a long way toward guarding against drops in value, said Dan Phaneuf, a University of Wisconsin-Madison researcher who studied the industry’s potential effects on Pepin County.

“If, in the past, they’ve shown themselves to be good citizens,” Phaneuf said, “you might expect there to be fewer impacts in terms of housing prices.”

In May 2012, a plume of sediment-laden stormwater left the Preferred Sands mine and processing plant in Blair, traveling through the first floor of a home and into a garage on another property.

The state Department of Justice ordered the Pennsylvania-based company to pay $200,000 in penalties for air and stormwater permit violations, including for that incident.

Phaneuf said this experience could have a negative impact on property values.

“A house that is nearby that facility and could potentially see that sort of event happen is likely to sell for less money,” Phaneuf said. “People will respond to that information.”

But Preferred Sands “worked swiftly and diligently” to remedy the situation, wrote Matthew Navea, the company’s corporate director of environmental health and safety. It bought the inundated home and helped the family secure another property nearby, according to property records and the company.

Meanwhile, property records show Preferred Sands has continued buying nearby land. With its latest acquisitions, the company has surrounded some landowners on as many as three sides.

Jessica Lien and her husband built a house in 2009 on about four acres outside of Blair before the mine moved in. Their property on a bluff was a perfect compromise between her husband’s desire to live in the country and hers to be close to town.

When she heard the mine was coming, Lien was not pleased. Today Preferred Sands owns land on two sides of her property, though the edge of the mine itself is about a three-quarters of a mile away. She is worried about potential damage, especially if the mine operations move closer.

“We’re stuck here,” Lien said. “No one is going to want to buy a house next to a mine.”

In Pepin County, the Great River Road National Scenic Byway overlooks Lake Pepin, a wide spot in the Mississippi River, and passes through picturesque communities on its way south.

“The quality of life and everyone’s property value depends on protecting the beauty down here,” county Supervisor Bill Mavity said. “That’s what makes this place go.”

After a frac sand processing plant with a rail and barge loading facility was proposed along Lake Pepin, a civic group commissioned one of the few Wisconsin studies examining frac sand’s potential effects on tourism and property values in the area.

Phaneuf and a fellow economist, Dominic Parker at UW-Madison, looked at the effects of traffic congestion, noise and degraded air quality on property values.

The study did not use Pepin County data because of limited funding, so the results were not definitive. But it predicted that frac sand operations and transport could “significantly impair property values.”

Last June, the Pepin County Board passed an ordinance banning frac sand mining, processing and transport facilities along the Great River Road. The ordinance cited potential drops in property values as a reason.

Paul McLean, vice president of corporate development for Preferred Sands, suggested that the industry is getting a bad rap.

“Large tracts of land are often bought based on economic value related to the resource extracted from the area,” McLean wrote. “In general, those property values are positively impacted. In addition job creation can create demand for nearby housing which in turn can positively impact housing prices.”

Phaneuf said the researchers plan to begin a more rigorous study, potentially this summer, with funding from the U.S. Department of Agriculture.

In some communities, mining companies and local governments are creating safeguards for property owners.

In July 2011, after 14 months of negotiations, the Houston-based sand mining company EOG Resources entered into an agreement with the town of Howard, in Chippewa County. If a landowner adjacent to the company’s mine cannot sell the property for fair market value, EOG will pay the difference. If the property does not sell in six months, the company will buy it. The agreement expires in 2031.

EOG, which has a similar agreement in a nearby town, declined comment. Hi-Crush Partners, a Texas-based sand mining company that operates in Trempealeau County, also entered into a property-value agreement with nearby landowners.

Ron Koshoshek, the town of Howard’s lead negotiator, called the guarantee key to the deal.

“You’re trying to balance property rights of adjacent landowners with the rights of the owner of the land to lease it out for mining purposes,” Koshoshek said.

The agreement will protect Howard resident Jeffrey Bennesch, who worried that the bank would not let him use his property as collateral to renew a farm loan because of concerns over lost value. He is one of 11 property owners specifically named in the pact.

Bennesch said that with a guarantee, he could renew the loan because EOG would make up the difference if his property lost value.

Although he does not like truck traffic from the mine, he does not want to leave the land that has been in his family for four generations.

“I’m sure there will be a day when I decide to retire and sell but I hope that’s a long time in the future,” he said. “But at that point, I’m glad there is somebody else that is going to foot the bill for loss in value because I believe I won’t be able to sell for as much as it’s worth.”

Larry Schindler was not among the landowners to receive a guarantee, but he does not think he lost out. For a time, a sign in his yard read, “Got sand / Let’s mine not whine.”

Schindler owns less than an acre on land he said has been in his family for 150 years. His house is about a quarter mile from the Howard mine. From time to time he hears blasting, but he said the company notifies him beforehand. And the changing landscape does not bother him, either.

“It’s all hills – if they cut them down it won’t break my heart,” Schindler said. “There’s enough of them around here.”