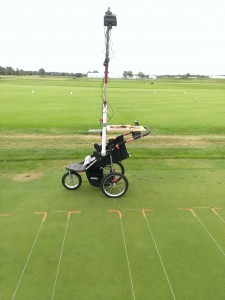 Researchers are testing if they can determine turf health with an infrared camera mounted on a jogging stroller before buying a drone o do it from the air. Photo: Bob Goodwin

Cameras capable of detecting different waves of light will be mounted on an unmanned aircraft to take pictures of the turf below. Those pictures will determine what areas of land need extra attention.

The idea is to mount an infrared camera onto an unmanned aerial vehicle — commonly known as a drone — which would take numerous overlapping pictures of a golf course. The images would then be compiled into one large picture of the entire course.

From the pictures, analysts will look at the health of turf based on its different levels of “greenness,” Goodwin said. Moisture differences determined by the greenness of the grass will help make decisions about irrigation patterns.

Goodwin declined to identify the company because of the competitive nature of the research.

But MSU is not alone.

People across the country are using unmanned aerial vehicles for similar applications, said Jeff Bollig, director of communications for the Golf Course Superintendents Association of America.

“It’s a good way to look at irrigation distribution issues from the air,” said Larry Stowell, a researcher with Pace Turf, a turf grass and pest management company in San Diego.

Stowell uses a color camera on an unmanned aerial vehicle to look at issues like drainage problems and gopher tracks on golf courses and sports fields. Similar to Goodwin’s project, Pace Turf takes pictures to see what areas need help based on the green color.

Before the project really takes off, MSU researchers are testing the ability to determine turf health with an infrared camera mounted on a boom on a jogging stroller. Given that initial research on the ground is successful, a type of drone will be chosen to mount a camera and begin flying by next April. 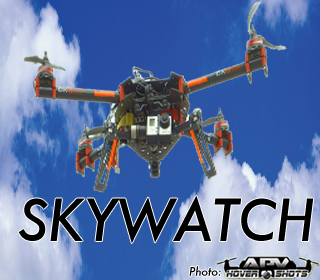 Goodwin is about half way through piloting ground school, a step required to fly for research. The goal is to obtain a certificate of authorization from the Federal Aviation Administration to fly an unmanned aerial vehicle in public airspace.

Although it is currently illegal to fly for commercial purposes, the Michigan State University remote sensing group says they’re well positioned to do research projects such as this one, which is allowed under the certificate of authorization.