While health agencies look for faster ways to detect harmful E. coli bacteria on public beaches, they overlook another germ that may cause even greater problems.

Staphylococcus aureus, or staph, is a beach threat newly recognized by research teams across the country. 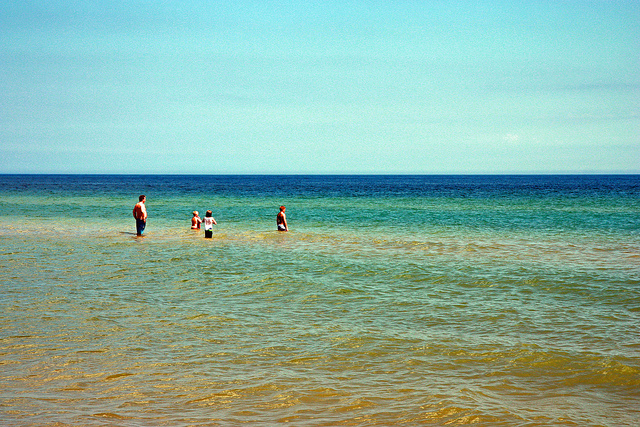 “This organism is tenacious, it can reoccur and it can be very difficult to get rid of,” said Marilyn Roberts, a professor at the University of Washington, who studied the bacteria on marine and freshwater beaches near Seattle. “It can cause a huge amount of destruction of tissue and in the worst case scenario it can cause death.”

The EPA doesn’t require municipalities to check beaches for staph. Instead, they test for E. coli, a bacteria usually spread through feces from farm runoff or leaky sewers. The detectors pick up on some strains of harmful bacteria but not staph.

But runoff and sewers aren’t the culprit for spreading staph. Staph usually lives on skin, which leads some scientists to believe its source is beachgoers themselves.

Fogarty is studying germs on Great Lakes beaches. She plans to publish the study in the fall.

Staph infections can be complicated because some strains are resistant to methicillin, an antibiotic usually reserved for last-resort hospital cases. Those strains are called MRSA — pronounced mersa — which stands for methicillin-resistant Staphylococcus aureus.

“Organisms that are resistant to methicillin are typically resistant to a large class of antibiotics, so treatment of MRSA is very difficult,” Fogarty said.

Fogarty has found staph on all five Lake Erie beaches she tested. One of two she examined on Lake Huron and three of six she checked on Lake Michigan also tested positive.

Almost half the beaches she tested had the potential to harbor the antibiotic-resistant staph bacteria.

She doesn’t know if anyone has contracted staph infections from Great Lakes beaches or how much bacteria are needed to pose a health risk.

Until scientists learn more about staph and the antibiotic-resistant staph, beachgoers should practice good hygiene and wash after playing in the sand, said Shannon Briggs, a toxicologist and beach monitoring coordinator at the Michigan Department of Environmental Quality.

“Different types of bacteria could be present in beach sand, but we’re just now detecting them and need to know a lot more about it,” Briggs said. “For most of us when we go to the beach it isn’t a problem because we can play and then wash our hands.”

Roberts recommends people take hygiene a step further by washing toys and animals that have been on the beach, and covering up scrapes and wounds that are more vulnerable to infection.

MRSA and staph can be present anywhere there are humans, but Briggs said the beaches may have a natural disinfectant.

“The ultraviolet light from the sun is a natural killer of bacteria, so we have that going for us,” Briggs said.

But until scientists learn more about the danger and prevalence of staph and antibiotic-resistant staph infections and how to detect them, management of the potential threat is uncertain.

“There’s a lot of concern for beach managers,” Fogarty said. “But what do we do? You can’t stop people from going to the beach.”

5 thoughts on “Beach managers test for E. coli while another germ goes undetected”