Some of the Great Lakes’ worst mercury emitters may have to put a lid on it as federal regulators recently moved for the first time to cap emissions of the toxic metal from the nation’s cement plants.

Airborne mercury falls into lakes and contaminates fish. Eating too much mercury-laced fish can cause brain and kidney damage, especially in young children.

The EPA published its plan Wednesday to limit cement plant mercury emissions, which the agency said should keep 11,600 pounds of mercury out of the air nationwide. The proposal is open for public comment until July 9, 2009.

EPA records show the Great Lakes states’ 26 cement plants emitted more than 2,100 pounds of mercury in 2007, the most recent reporting year. Some plants emitted only a few pounds; others were among the top mercury emitters in their states.

Cement plants burn coal to cook limestone and other ingredients in big kilns. Coal and limestone both contain mercury that is vaporized and released in the kiln’s emissions.

In 2007, the Lafarge Midwest Inc. plant in Alpena, Mich. emitted the most mercury of the Great Lakes cement plants, according to EPA records. The plant’s 360 pounds of mercury emissions were enough to make it the second-biggest emitter of the toxic metal in Michigan.

Only the coal-fired power plant in Monroe, Mich., emitted more, at 930 pounds.

The Lafarge plant in Ravena, N.Y. was the second-biggest mercury emitter in that state. The Ravena plant’s 122 pounds followed only the 220 pounds emitted by a power plant in Dunkirk. 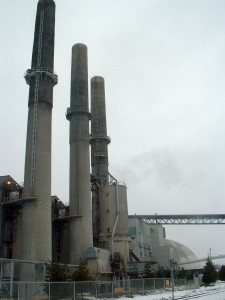 The Lafarge cement plant in Alpena, Mich. claimed 360 pounds of mercury emissions in 2007.

Earthjustice, a Washington D.C. environmental law firm, sued the EPA in 2007 to force a limit on mercury emissions from cement kilns. The firm filed the suit on behalf of six environmental groups and nine states, including Michigan, New York, Illinois and Pennsylvania.

The EPA settled in January 2009, agreeing to propose a mercury limit this year and make it permanent by March 2010.

Earthjustice attorney Jim Pew said he’s pleased with the EPA’s proposal, but he expects the agency will get a lot of pressure from the cement industry to weaken the limit.

Some plants could have a hard time meeting the proposed cap, which could push domestic cement production into countries with even less stringent environmental standards, said Andy O’Hare, vice president of regulatory affairs with the Portland Cement Association.

The proposal comes at a down time for the cement industry. Three plants in the Great Lakes region shuttered in December 2008 and January 2009, according to Portland Cement Association records. The Alpena plant announced in March a 45-day kiln shutdown.

The Alpena plant would have to cut its mercury emissions by around 70 percent under the new cap.

Until 2004, Lafarge reported around 60 pounds of annual mercury emissions from the Alpena plant. But those reports were based on an EPA-approved method of estimation and not actual measurements, said Mark Stephens, a former state regulator who enforced air pollution rules at the Alpena plant.

The Michigan Department of Environmental Quality directed Lafarge in 2005 to measure plant’s mercury emissions. The results showed the plant was emitting hundreds of pounds more than Lafarge had been reporting, Stephens said.

After the tests, the DEQ added a mercury emissions limit of 390 pounds to the plant’s operating permit. Lafarge successfully fought the limit in court.