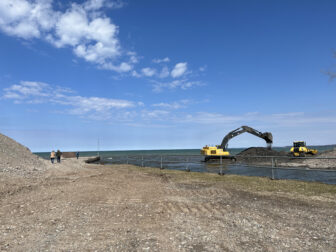 Onlookers watch from the west bar as the contractor, Jeff Decker, dredges the Port Bay channel, and builds the cobble bell on the east bar. Image: Theresa Ruswick

Researchers have developed a new way to combat erosion and save money by using environmental processes to feed sediment to the shore.

The project is based in Port Bay, New York, in southern Lake Ontario. It is one of several projects run by the Healthy Port Futures effort, which works with natural systems to solve coastal issues in the Great Lakes region.

“We’re working with the winds and the waves,” Davis said. “You can’t control them like you would a dump truck.

“It does necessitate giving up a bit of control, but in general, I think that’s a good thing.”

Port Bay is protected from waves by a barrier bar which also provides public beach access, according to a study published in a recent edition of the Journal of Great Lakes Research. However, the bay is eroding quickly, leaving the inland vulnerable.

For years, Port Bay has tried to combat this by piling sediment directly on the beach. Cutting through the bar is a channel that allows for some boat traffic. It is maintained by annual dredging, which then creates an excess of sediment.

Small communities like Port Bay manage their own inlets because they are not federally maintained, said Theresa Ruswick, the research associate for the project and a fellow with the U.S, Army Corps of Engineers.  They have to raise the money to preserve the barrier bar and beach, making cost-effectiveness a priority.

Using a physical model of the bay, called a water table, the team developed a way to disperse sediment by placing it offshore in a bell-shaped formation called a cobble bell. Instead of bringing in new sediment, they use the sediment from the annual dredging. The waves then do the hard work of distributing it on the beach, recreating the naturally occurring slope. 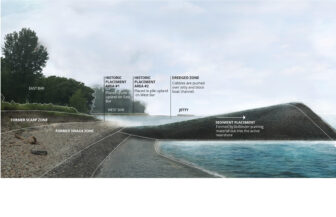 Cobble refers to the size and type of sediment, said Brian Davis, a primary investigator of the Port Futures project and an associate professor of landscape architecture at the University of Virginia. In this case, the sediment from the dredging of the canal consists of rocks the size of a tennis ball up to the size of a basketball. Bell refers to the shape of the feature once the sediment has eroded and settled.

“Erosion is usually thought of as bad in a coastal community, but it’s actually fundamental to the health of this barrier bar,” Davis said. Whether it’s good for the bar depends on the placement and the pace of erosion, which this project helps to manage.

Project contractor Jeff Decker was critical to developing the design. Decker helped the team understand the capacity of the excavators and bulldozers, which informed the geometry and location of the cobble bell, Davis said. “This is an adaptive management project, so collaboration is key.”

This project uses the resources and practices the community already has and positions sediment in a way that benefits humans and ecosystems, he said. The old method simply mashed the sediment onto the beach without any of the sorting that would happen naturally. This sorting is called sediment grading and it creates a stabler and healthier beach. 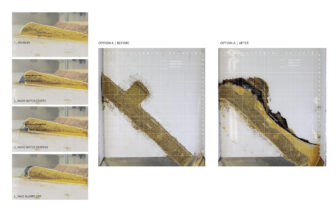 A physical wave table was set up to simulate the conditions at Port Bay, including wave direction, slope, and sediment size, to test different forms. Image: Theresa Ruswick

Sediment is one of the most valuable things in these coastal communities, Davis said. But it is often taken for granted and treated as waste after being dredged. In addition to being wasteful, disposing of the sediment costs money.

Sediment from the annual dredging used to be placed further up on the bar, out of reach of waves and water, Ruswick said. That’s expensive and time-consuming.

Instead, with the equipment used for the annual dredging, they placed the sediment in the cobble bell formation, Davis said. This disperses the sediment naturally over time, taking advantage of the waves to carry the sediment. Using this method, they nourished the beach and completed the dredging at once.

Working with nature brings lots of benefits, Davis said. In addition to being more cost-effective, it promotes healthy ecosystems and beautiful natural landscapes. Still, it isn’t foolproof and adaptation is needed based on the environment.