The Microcystis bloom in western Lake Erie at the bloom peak in Aug 30-Sep 8, 2021 (left) and Aug 20-29, 2022 (right). Areas that are red had greater likelihood of scum formation. While 2021 had a larger bloom area, most of this was at low concentrations. In contrast, the 2022 bloom has a larger area of high concentrations at the bloom peak. Image: NOAA, derived from Copernicus Sentinel 3-data

Harmful algal blooms were much larger in Lake Erie than experts predicted for 2022.

A year-end report from the National Oceanic and Atmospheric Administration said that the algae bloom was more severe than expected because of an increase in biomass that caused more  algae.

There are two reasons, said Richard Stumpf, oceanographer for the national oceanic and atmospheric administration. One is that there was a longer than normal peak of bloom.

“What we saw this year was a plateau rather than a peak,” Stumpf said. “A typical year goes up, hits a peak level, and comes down. Now, that peak might be really large for a severe bloom like 2011 or 2015, or it might be small, but it generally goes up to a peak. This year tended to hit that maximum state at a plateau for a month.”

Stumpf describes the plateau as “newish.” The algae bloom is more extreme this year, but  it seems to be trending this way because the blooms seem to be starting earlier  than they did 15 years ago, he said. Another reason has to do with the phosphorus, the key nutrient that limits the blooms in Lake Erie, Stumpf said.

NOAA  predicts the amount of phosphorus entering the lake from the Maumee River and other sources to calculate the expected bloom. This year, there were more than anticipated.

“So, there’s either phosphorus that was used more efficiently this year, or there’s some additional source of phosphorus that may be in the lake or such that we’ve not accounted for,” Stumpf said. “The combination of both are a part of the factor for the underestimate of the bloom.”

One idea that could further explain the bigger algae bloom could be rising water temperatures, said Laura Johnson, director of National Center for Water Quality Research at Heidelberg University.

Into October, there were higher air temperatures in the entire northwest region than ever before, Johnson said. This does not mean that temperatures were very hot in this year’s fall season, but rather not as cool as typically expected for algae blooms to still be around.

In a typical year, microcystis algae blooms in spring and summer. By the time it gets to September or October, the weather starts to change in a way that it’s not amenable for the bloom to survive, Johnson said. The waters tend to have more waves and turnover during the fall months compared to calmer water in the summer months, she said.

In the fall, the cool weather will stop the microcystis from growing and dispersing them through the lake until they are gone, Stumpf added. Microcystis is a type of cyanobacteria that grows naturally in freshwater. When algae blooms form and cyanobacteria degrade, many release algal toxins that can be harmful, according to the EPA. 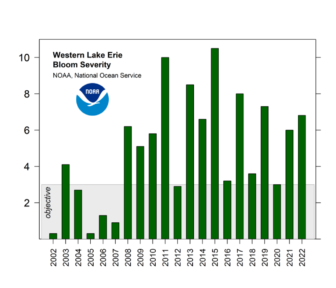 This year, the bloom switched from microcystis to a different type of blue-green algae called dolichospermum. Dolichospermum tolerates cooler water better than microcysts. It does occur in Lake Erie but generally does not bloom.

The two major nutrients that dolichospermum need are phosphorus and nitrogen.

“One of the thoughts is that the bloom was able to continue on because it was able to pull nutrients from a different source,” Johnson said.

There is still a lot to be learned about, such as air and water temperatures and if they have any effect on the bloom or if it may be something else, she said.

“We can say that it’s reasonable for it [dolichospermum] to be there, but we don’t have a good explanation as to why it appeared this year and it hasn’t appeared in other years,” Stumpf said.

The prediction model was inaccurate potentially due to the duration of time that the biomass estimate was taken, Stumpf said. This can be corrected by more accurately estimating when the bloom starts by depending more on when water temperatures increase, he said.

There’s a temperature dependency that could be accounted for, meaning that if waters are warmer, then the bloom will start sooner.

The second part to correcting the prediction model appears to be determining why more phosphorus was used this year than in the past, he said. That is still a research question for NOAA to correct as there could be a multitude of ecological factors as to why. Potential explanations could include phosphorus coming from sediments or competing species in the lake.

The only other year that has been a problem for the prediction model was in 2013, Stumpf said. If there is a similarity between this year and 2013, it will give NOAA a reasonable chance of explaining why the bloom was much bigger this year, Stumpf said.

“It becomes very difficult if you only have one year with a problem,” Stumpf said. “I’m hoping that between looking at these two years out of the last 20 years, that we can come up with an explanation and then adjustment for the model to correct us.”