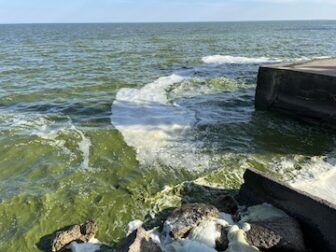 Getting rid of algae could make Lake Erie property owners some serious money.

And, there’s already a clean-up plan in place. The 2012 Great Lakes Water Quality Agreement was a deal struck between the United States and Canada to protect and restore the Great Lakes. And fulfilling it would provide $42.9 million annually to the Lake Erie housing market.

“Staying afloat: The effect of algae contamination on Lake Erie housing prices,” is the first study to measure the economic impacts of the agreement. The authors of the 2021 study, including two Ohio State University researchers, hope to highlight the importance of water quality management policies in terms of the housing market.

Algae are plants that grow on the surface of the water. But when they grow out of control, they can kill fish, mammals and birds. The unsightly plant has also been known to make people sick. 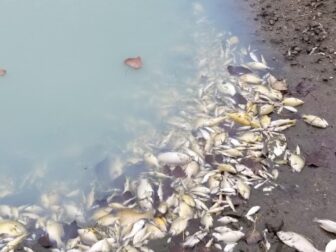 “Generally, August through September is when it happens in the western basin,” said Kent Baker, a Lake Erie boater. “If there is a scum present on the surface, we don’t swim in it.”

Much of the algae growth in Lake Erie is due to city wastewater and agricultural runoff. Fertilizer is full of nutrients like nitrogen and phosphorus. When it gets into the water, the algae eat it up and grow.

“Sometimes it collects together in big clumps,” said Michelle Miara, who owns a house on the western coast of Lake Erie. She frequently shares photos of the algae with other homeowners.

“I had taken this picture of the lake, and it looked like normal water, except there was this huge green spot that we called algae island,” she said. “But it moved with the wind and an hour later it was across the lake.”

Since 2014, local communities have spent over $1 billion trying to clean up the water, the study reports. But that’s a drop in the bucket compared to what the lake is worth.

“Lake Erie supports a housing market with over 15,000 lake adjacent properties and a multibillion-dollar recreation industry that employs 128,000 people, generates $15 billion in tourism revenue, and contributes $1.9 billion in taxes annually to the State of Ohio,” according to the study.

Not to mention, it provides water for 11 million people. 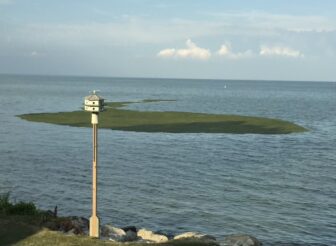 But since the algae began wreaking havoc on the lake in the early 2000s, lake-side property owners have borne most of the economic burden.

Waterfront restaurants and hotels in Ohio have experienced a 29% to 35% decline in revenue during months with persistent harmful algal blooms, the study said. During that time, some boaters will avoid the lake where the algae is the worst.

The study predicts that a 15% increase in algae could decrease the price of the average house by $2,205.

“Under a business-as-usual scenario without intervention, property values are expected to decrease by at least $394.5 million,” according to the study.

But if all goes according to plan, the Great Lakes Water Quality Agreement could increase property values for anyone within a mile of Lake Erie by as much as $670 million.

The goal is to reduce phosphorus, which feeds the algae. Cutting down phosphorus by 40% by 2025 would improve water quality by 54%.

This would increase property values of the average homeowner by $7,500.

But homeowners will still benefit significantly even if the agreement’s guidelines are not met in full.

How the U.S. and Canada plan to achieve this is still up in the air. But there are two main ideas discussed in the study.

The planting of a riparian buffer zone, or a vegetated area near a body of water, would act as a wall to prevent fertilizer from draining into the lake, according to the study.

Alternatively, a fertilizer tax might deter people from using fertilizer at all. The more money fertilizer costs, the less people will want to buy it. This would help prevent the creation of algae altogether.