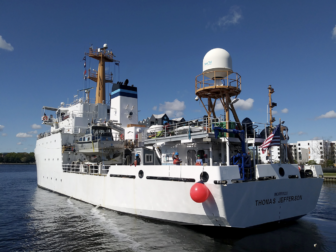 Exploring new territory, the commanding officer of the National Oceanographic and Atmospheric Administration (NOAA) ship Thomas Jefferson and his crew have discovered multiple shipwrecks on the lakebed of the Great Lakes.

“In an area that has had as much shipping and vessel traffic as the Great Lakes have had over the past 200 years, we expected to find quite a bit of stuff,” said the commanding officer of the ship, Matthew Jaskoski.

The ship cruised through Lake Erie and Lake Ontario last spring for the first time in over 30 years to conduct a survey mission.

The main drivers behind the mission were the age of current nautical charts, the nature of ship traffic and changeability – how frequently the lakebed changes, according to Jaskoski.

“The majority of the reason for collecting this data is to go on the nautical chart, the map that mariners use to navigate a ship to go from point A to point B,” Jaskoski said.

Shipwrecks are a finite natural resource, so preserving and managing them are as important as other aspects of marine preservation, said Jaskoski.

In this case, the Thomas Jefferson explored waters in the two lakes bordering Michigan, Ohio, Pennsylvania and New York. Data regarding shipwrecks is sent via the Office of Coast Survey to be dealt with by state agencies.

That allows archaeological experts to determine the importance of the shipwreck, said Jaskoski.

However, that data isn’t always made public.

“If the state historic preservation office determines that this is a highly sensitive, very historic shipwreck that they do not want everyone going out and diving on, then they may not make it public,” said Jaskoski.

On the other hand, Jaskoski said, if a shipwreck poses a danger to other vessels, it will be shown on the lake charts.

Information about the most recently found shipwrecks has not been made public as the data is still under review by marine archaeologists.

According to Jaskoski, the Great Lakes are amazing at preserving shipwrecks and, therefore, the better known the wrecks are, the more likely they could be damaged by human interaction.

“We treat those with a high amount of respect you expect to give any national resource like that,” said Jaskoski. 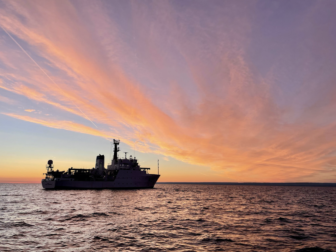 According to Jaskoski, backscatter reflects how fast sound travels under water, as well as how strong the echo is when it returns to the receiver.

“A stronger echo indicates a harder surface off of which the sound bounced and, similarly, a more faint echo would come from a softer surface,” Jaskoski said. “That way we can make inferences as to what the seafloor might be made of.”

“Stakeholders and other scientific offices are interested in that because it gives them a better idea of not only the 3D model of the sea floor,” said Catoire. “It can also be beneficial in terms of habitat mapping and help with other scientific causes such as breeding grounds for certain fish species and the location of zebra mussels,” an invasive species.

Collecting such data helps scientists better understand more of what the seabed is made of instead of just its depth, said Catoire.

As data collection is over for the year, Catoire and Jaskoski are“cleaning” the data – removing excess noise – and getting it ready for further processing before it’s added to lake charts.

A lot of quality control goes into data before they’re published, said Jaskoski, and anytime a government agency publishes something, it needs to make sure it’s accurate.

The primary customer of the NOAA commissioned officer corps is the Office of Coast Survey.

As soon as the data leaves the ship, it becomes property of that office. Additional quality control is conducted before being applied to the updated nautical charts, according to Jaskoski.

The data are also publicly archived at the National Center for Environmental Information.

While Jaskoski and Catoire are still working on data from last summer’s survey, they’re also thinking about upcoming projects.

“The ship’s projects next year are likely going to be in the Gulf of Mexico and southeast Atlantic coast, the western Gulf of Mexico near Galveston and the southeast coast near Charleston, South Carolina,” said Jaskoski.

Jaskoski said he doesn’t foresee the ship coming back to the Great Lakes in the near future, but believes the mapping effort will continue in the Great Lakes for the lakebed 2030 goal: ;map the entirety of the Great Lakes seafloor at high density by 2030.

“The goal is to map the entire Great Lakes Basin to modern standards by 2030, which is a huge undertaking, but also a question of resources,” he said.

Although they’re experts on the water, Catoire and Jaskoski still found challenges navigating the Great Lakes.

“We had to learn the process of going through the St. Lawrence Seaway, going through 30 locks and working in a geographic area most of us did not have familiarity with,” said Jaskoski.

On top of navigating unfamiliar territory, Jaskoski and Catoire had to learn how the weather patterns, wave action and sea state differed from those on the East Coast.

“It was incredibly fun and challenging to work in a new environment,” said Jaskoski.