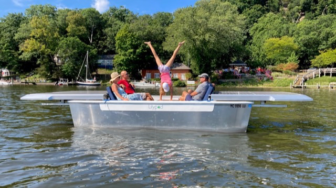 A solar-powered boat has recently emerged on the Kalamazoo River that can run even through the night after the sun fully charges it.

The Lilypad rental boat is pollution-free and fit for up to nine passengers. When at rest, the solar panels of the boat function as the cover and ensure that the interior is kept clean, said Dana Lowell, Lilypad Labs chief executive officer. Once opened, it is ready to launch from the dock.

The Michigan company is based out of Holland.

Lowell describes the Lilypad as a good business model. The company sells time on  – not the boat – itself and that provides more access to many more people compared to a privately held boat, he said.

“I can rent the boat for 15 years and it has $1.8 million worth of revenue in that timespan,” Lowell said. “I like that business model better. It’s better for everybody involved, and it uses the asset better.”

The Lilypad is maneuvered by a joystick. Batteries charge as long as it is in the sunlight. The company’s two vessels can be rented at a marina in Saugatuck, Michigan.

When production is scaled up, the company plans to launch an app for easy access and scheduling, similar to a ride-share app for cars.

The advantage to renting a ride for the boater is that a standard recreational boat comes with a lot of labor and expenses like buying a boat, storing, insuring, towing and unloading it in and out of the water, Lowell said.  And Michigan boaters have a very limited season compared to the upkeep of a boat all year round.

Lowell describes the Lilypad as systems level thinking. The vessel is meant to be easier, more affordable, and without the complications of  owning a typical recreational boat, he said.

The initial idea for the Lilypad sprouted in response to the climate crisis, Lowell said. Typical recreational boats produce carbon emissions from burning  fuel, according to Sailors for the Sea.

“Lilypad is an icon for carbon free mobility and accessibility,” Lowell said.

It is made from recycled and environmentally-friendly products. Aluminum catamaran hulls can be recycled indefinitely. The timber and decking is harvested salvage lumber and reused batteries are recovered from the automotive industry, Lowell said. 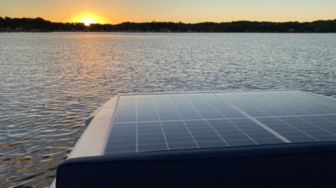 Solar panel of the Lilypad boat during sunset on the Kalamazoo River. Image: Lilypad Labs.

“We were really focused and purposeful in terms of how we designed this and what it was about,” Lowell said. “We really are just trying to do the right thing, which is the smart thing.”

The Liliypad is one of four Michigan companies that received up to $60,000 in investments from Centrepolis Accelerator in 2021. The  unique business incubator helps produce clean technology  products. It is  funded by the Michigan Economic Development Corp. and the Michigan Department of Environmental, Great Lakes Energy, said Centrepolis Acceleration Executive Director Dan Radomski.

It is the only incubator of its kind that has in-house design, engineering, and prototyping,  Radomski said. “A lot of incubators are great at helping with business strategy and raising funding and maybe giving some experienced entrepreneurs. But when it comes to developing a physical product, none of the incubators have in-house design engineering staff, let alone prototyping capabilities, and that’s what we bring.”

Centrepolis Acceleration helped Lilypad Labs get building materials from local suppliers. It also connected Lilypad Labs to a number of other Michigan investors and marinas.

The Lilypad was never designed to go fast, Lowell said. It travels about five or six miles per hour and is not made to pull inner tubes or wakeboards.

“It is designed to be this social experience cafe table on the water,” he said. “And if you get out of that space, it won’t be able to form those end goals. Other than that, it’s a pretty capable platform.” 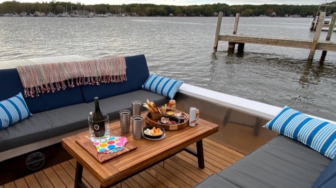 The company will have a better gauge of who the boat appeals to once more boats are launched and there is extended use from renters, he said.

Electric boats are an “emerging technology that may be unfamiliar to shoppers,” according to the Michigan Boating Industries Association.