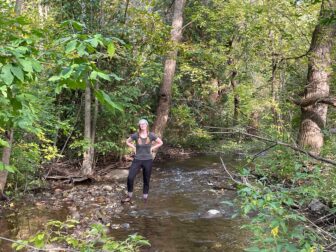 Ashley Watt near one of the Redside Dace spawning habitats that she studies in her conservation work.

A University of Windsor doctoral student studying conservation has a knack for science communication – and is using it to bring attention and support to at-risk species.

Ashley Watt studies the Redside Dace, a species of minnow with a striking red stripe that appears on its side around the time of spawning. It’s one of the only fish that leaps out of the water to catch its prey – mostly ground-dwelling insects.

Watt runs a YouTube channel about the fish, and recently published a children’s book about the dangers it faces and how people can help conserve them.

The book, “Rory the Redside Dace,” follows the adventures of Rory, a young fish whose family is forced to leave its home in the stream after the water becomes polluted. Later, Rory meets a young girl who helps restore the stream, allowing Rory and his family to return.

The book is illustrated by Abigail Tan.

Redside Dace populations have indeed declined as a result of the massive habitat loss and pollution that occur as the greater Toronto area expands. And the Dace is an important species. 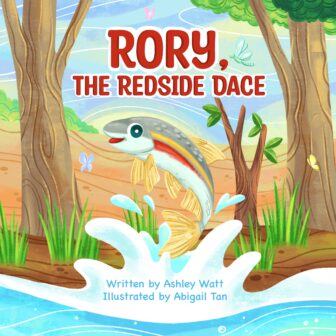 “From an ecological standpoint, they’re an indicator species whose presence or absence really reflects specific environmental conditions,” Watt said. “If Redside Dace are present in a stream, we know that the health of the ecosystem is doing well, it’s functioning.”

Redside Dace prefer cool, clear water. They are sensitive to changes in river conditions, and are quite transient, Watt said. If water quality decreases or food declines, the fish will travel far to find a more preferable habitat. That tells researchers like Watt that there is work to be done in that stream.

The fish is becoming the poster child for species reintroduction in Ontario, Watt said.

She was inspired to create a children’s book about the fish when she recognized that few people tend to hear about the at-risk species she studies.  She wanted to draw awareness to the Redside Dace, an at-risk species that is “in our own backyards.” The fish is often harmed by urbanization and pollution.

“I wanted to create a story to really have a conversation around Redside Dace and create a character that I hoped people would fall in love with,” Watt said. “I thought that this would be a really fun way to approach a challenging topic like reintroduction and conservation biology that would have a more positive spin…when we hear about species at risk it’s often from a more negative lens. But there is a lot of hope for recovery, and so I wanted to share that side.”

Watt credited UWindsor and her colleagues in the Pitcher Lab for their help in drafting and revising her book.

She also runs a YouTube channel, “The Redside Dace Space,” which features videos of Redside Dace and other fish. She created the channel after capturing footage of Redside Dace spawning, which had never before been documented in the wild.

“I didn’t want to keep this to myself, I wanted…to show people these beautiful species and their interactions, and people can come and learn from them,” Watt said.

Watt’s footage was used in “Great Lakes Untamed,” a documentary miniseries that explores the natural history of the Great Lakes. Her shots of the Redside Dace spawning are featured in the third episode, “Mysteries, Marvels, & Monsters.”

Despite her passion for this kind of work, Watt doesn’t come from a creative background. She said she is learning as she goes, and that the slowdown that the COVID-19 pandemic brought helped her pursue projects that she ordinarily did not have the time for.

Still, Watt said she has long been passionate about science communication. In the past, she interned at zoos and aquariums, often in programs where kids had the chance to see streams and the native species that inhabited them. The challenge of disseminating information to young children and the general public was a common topic of conversation, Watt said.

“At the end of the day, I can do really interesting research that gets published in journals, but the true impact is having a conversation in the broader community,” she said. “That’s why I wanted to create something that would be for everyone, because I think science is for everyone, education should be for everyone.”

She has received plenty of positive feedback for her book. It seemed to have started a conversation on Twitter, she said.

The book’s success will help the Redside Dace gain more than just awareness. Watt is donating 50% of the book’s proceeds into freshwater conservation to continue to support the health of waterways. She said she wants to continue writing children’s books about species at risk.

“That’s really what I wanted, was to start a conversation and highlight this fish that not a lot of people have heard about,” she said.