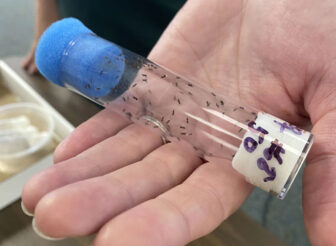 The samba wasp, seen here in a test tube, could be the answer to a decade-long battle with fruit flies on Northern Michigan cherry farms. Image: Lily Guiney

Scientists, cherry growers and self-professed “science nerds” peered into a box of test tubes to get a glimpse of a tiny wasp that could be the answer to a decade-long battle with fruit flies on Northern Michigan cherry farms.

Inside the Michigan State University’s Northwest Michigan Horticultural Research Station, at the top of a hill overlooking cherry orchards and rolling farmland, there’s hope that the samba wasp — no bigger than a grain of rice — could change the region’s agricultural landscape for the better.

For the past 10 years or so, entomologists have been looking for a way to control the population of spotted wing drosophila, a fruit fly that feeds on healthy cherries and blueberries. They say they may have found their answer in releasing the samba wasp, which kills fruit flies by laying its eggs inside them.

“These are the good bugs,” said Nikki Rothwell, the director of MSU’s Extension program at the research station near Traverse City. “And so we’re trying to do these releases to try to lower the populations of this bad bug, the spotted wing drosophila,” she said.

Those fruit flies first arrived in Michigan in 2012 and pose a threat to cherry growers in Northwest Michigan due to the area’s late harvest season. It happens to coincide with the flies’ mature phase.

In the past, farmers have used various insecticides in efforts to manage the population of spotted wing drosophila, but none of them has made a long-lasting impact.

Three cherry orchards in Leelanau County served as sites for the release.

Scientists and cherry growers alike expressed excitement about the samba wasp, especially its potential to lower the amount of pesticides that farmers use.

“Every grower in Northwest Michigan has had to battle this pest, and it’s a very difficult pest to work with,” said Jim Nugent, a cherry grower and chair of the state Tree Fruit Commission. “So this is so exciting, and we have our fingers crossed that it’s going to actually become established – we don’t know that yet, but if it does, this has the potential to reduce those populations in nature.”

The wasps, which are native to Asia, have had success against fruit flies in Washington.

If they take hold in Northern Michigan, researchers plan to conduct another release in Southwest Michigan’s blueberry growing region.