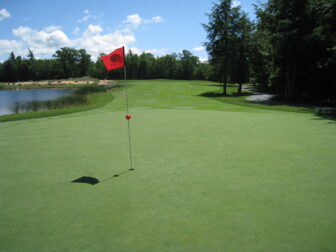 At the beginning of the COVID-19 pandemic, there wasn’t much for many people to do other than sit at home. But as restrictions slowly lifted toward the end of spring 2020, many people turned, or returned, to a popular sport – golf – to fill their time.

Since then, its popularity has increased.

Golf remained a major go-to recreational activity in 2021, with rounds played increasing by 5.5% in the country and by 5.6% in Michigan, according to the National Golf Foundation.

“There’s been a 10-year trend in this industry of declining interest, and this is really across the board, so it covers golf professionals, golf course superintendents and club managers,” Wilson said. “This started prior to the pandemic, and it’s leveled off for us a bit.

“This is a tremendous time of opportunity in the golf industry.”

Wilson said seven years ago, the total enrollment for all of those programs — including one at Clemson University in South Carolina — equaled about 2,650 students.

Since then, Clemson’s program has been discontinued, and the total enrollment of students last year among the universities had dropped to about 1,450 students.

Ferris State is the only one that offers the program in Michigan. Elsewhere in the Great Lakes region, only Penn State University has a program.

The program at Ferris has a secretary, an adjunct instructor, an internship coordinator and himself, Wilson said.

He said he hopes to bring in over 30 students for next fall semester.

So what do these students do?

“I get that question a lot: What do these students do for four and a half years?” Wilson said. “Actually, they’re really busy.”

To receive a bachelor’s degree, students take a golf orientation course, three levels of instructional coaching and facility management courses and five semesters’ worth of internships. They then can become head golf professionals, directors of golf, general managers and golf instructors.

If the disparity between the growth of play and the decline in enrollment in management programs continues, Wilson said he fears the future of some local and mid-level golf clubs may be at stake.

“One of the reasons I say that there’s going to be a lot of opportunities is that along with these numbers that we’ve talked about, about 53% of all PGA professionals are over age 50,” he said. “That means there’s going to be significant changes and retirements in the next 10 to 15 years, and so the younger people who might want to move into the industry will have some great opportunities.”

Wilson said about 40% of PGA staff members come from a four-year university program. The other 60%, he said, come from an associate program offered directly through the PGA.

John Rogers III, the director of Michigan State University’s Golf Course Turfgrass Management Program, said the reason there’s been a decline in the industry is due to the low wages and difficult hours of entry-level positions.

“It’s not a very good lifestyle for a lot of younger people,” Rogers said. “These positions don’t pay very well coming out of school.

Rogers said enrollment among students is up in his turfgrass program, a trend he attributes to golf professionals encouraging young people to apply.

“We haven’t changed the way we educate, nor will we,” Rogers said. “What will change is the number of students as they get interested, but it’s not our job to make them interested.”

He said superintendents are in the best position to grow interest among staff to further their education.

“I’ve graduated 1,500 students, and there’s hundreds and hundreds that are superintendents today, and every single one of them got started in this business by working on a golf course,” he added. “You send them. We educate them. You get them back.”

Superintendents, groundskeepers, equipment managers and interns are wanted at courses throughout the state, according to the Michigan Golf Course Superintendents Association, including openings in Charlevoix, Ingham, Kent, Mackinac, Oakland and Ottawa counties.

Wilson said he hopes the best for the future of the golf industry.

“I’m really passionate about the future of the industry,” Wilson said. “I’m nearing the end of my career. I’ve spent a long time in the industry, and so I’m concerned about its future just because I had so much fun working.