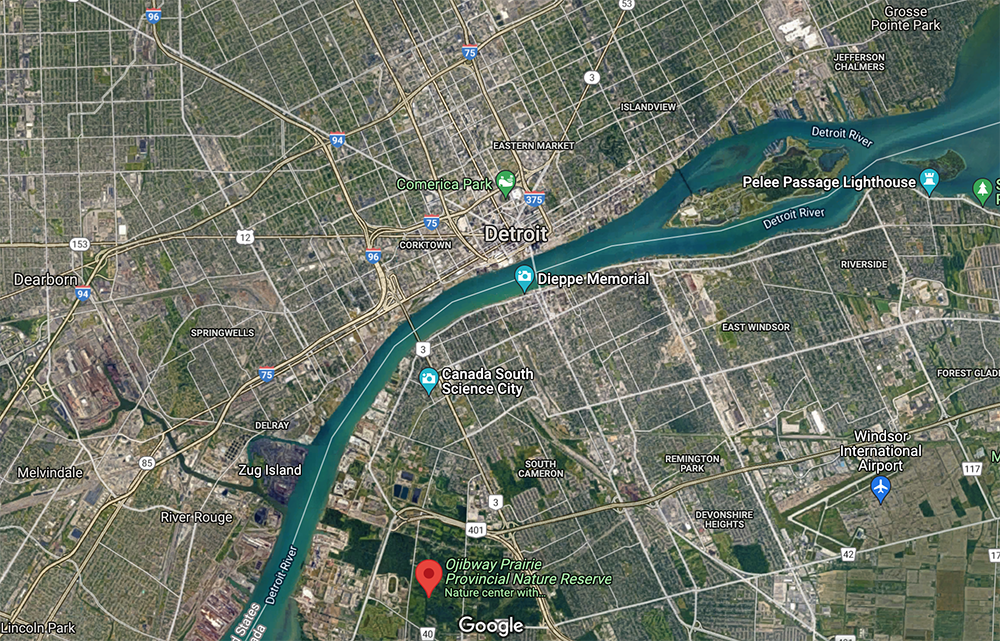 Parks Canada and Windsor are exploring the possibilities of turning some of the city’s most ecologically sensitive areas into a new national urban park.

But a dispute between the city and the Windsor Port Authority has stalled the project.

The National Urban Park project was announced last summer and has a budget of $130 million ($105 million USD) drawn from $2.3 billion ( $1.86 billion USD) in funding to help Canada meet its goal of preserving 25% off the country’s waterways and coasts by 2025.

The project’s goal is to “expand Canadians’ access to nature” and represent “the next evolution of Parks Canada,” according to Daemen Wall, who works for media relations at Parks Canada.

COVID-19 has increased both the relevance of the park system and the demand for more outdoor recreation spaces, according to Parks Canada.

“Many Canadian cities are experiencing unprecedented growth in population and density,” Wall said, “which is putting pressure on their existing park systems. At the same time, Canadians are increasingly looking for nearby parks – particularly since physical distancing associated with the COVID-19 pandemic.

The Ojibway Prairie Complex hear the Detroit River has more than 600 acres of undeveloped land. Image: City of Windsor

The Ojibway Prairie Complex site, is a 10-minute drive south of downtown Windsor and encompasses more than 600 acres of undeveloped land, including old-growth trees and native prairie.

Sites like that are exceedingly rare in southern Ontario. Essex County, which encompasses Windsor and the surrounding area has less than 6% of its original natural forest cover and less than 0.5% of its prairie lands intact, according to the Prairie Complex website.

The park complex has been a personal priority of his for years.

“The community has valued this land for many, many years and would like to see us add to this space but also create a wonderful park setting in this urban environment,” Dilkens said.

The complex is named after the native Ojibway people, known as the Anishnaabeg, part of the Anishinaabe nation.

The location of the park was also the site of one of the first European settlements along the Canadian side of the Detroit River.

In 1701, the commander of recently established Fort Detroit, Antoine de la Mothe Cadillac, described the natural state of the region:

“There are such large numbers of swans, that the rushes among which they are massed might be taken for lilies,” Cadillac said. “The golden pheasant, the quail, the partridge, the woodcock, the teeming turtle-dove swarm in the woods and cover the open country intersected and broken by groves of full-grown forest trees.”

The “golden pheasant” and the “turtle dove” mentioned in that dispatch are now known as the greater prairie chicken, which is no longer found in Canada, and the passenger pigeon, which went extinct in the early 1900s. 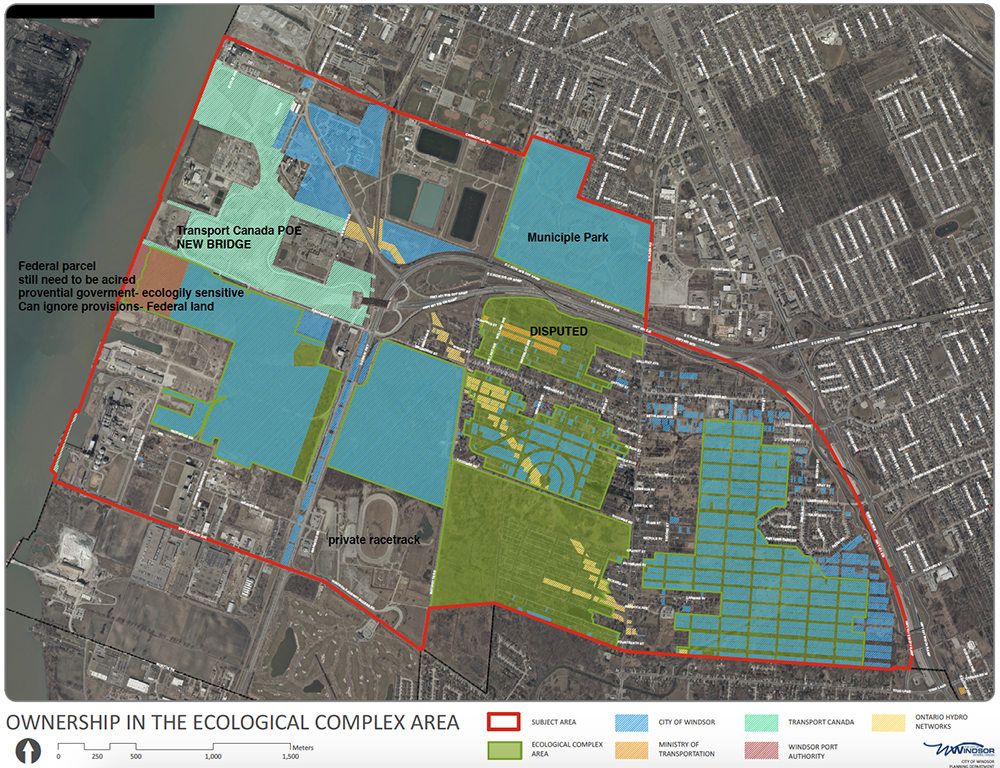 Map showing ownership of parcels of land in the park area. Image: City of Windsor.

Despite widespread habitat loss and the rapid industrialization of the surrounding area, the site hosts an abundance of native plants and animals, including over 160 species that are threatened, endangered or found in Canada only at the Ojibwa complex, according to the park’s website.

Efforts to protect the area from development have been ongoing for decades. The city bought the land for ecological preservation in the 1950s, according to city officials.

“They acquired this land because the council at the time realized the environmental sensitivity and the desire to preserve this land in its natural state in perpetuity,” Dilkens said.

Despite that foresight, land deals and acquisitions over the ensuing decades left the park composed of multiple complexes and amenities separated by industrial areas and residential neighborhoods.

City officials say they hope the partnership with Parks Canada will help combine those entities into one cohesive park.

“The idea is to bring it all together to create a seamless experience that really allows trails to be created and a whole (bicycling) infrastructure to be created where you could be in this national urban park and not even think you’re in a city because you’re in such a great wooded area,” Dilkens said.

This awkward land-use situation has also caused a strain between the federally run Windsor Port Authority and municipal leaders over the status of a 20-acre plot known as Ojibway Shores that is “the last piece of significantly underdeveloped waterfront in Windsor,” said Steve Salmons, the president and chief executive officer of the port authority.

The port authority acquired that plot during a land swap with the city in the early 2000s when the city traded Ojibway Shores for another piece of land farther north.

Later, the port authority commissioned an ecological survey after a public meeting indicated a strong desire to keep the lands undeveloped. The report found multiple species of plants and animals that would be negatively affected if the site were developed.

City officials like Dilkens also agree with the need to preserve Ojibway Shores, which he calls the “most difficult piece” in the way of future developments.

That’s because the land is environmentally crucial to wildlife for both drinking and for entering and leaving the park complex from the river.

“To give certainty to the national urban parks concept, what we are asking the federal government to do is transfer this land from the port authority to Parks Canada, which would then give certainty to our residents that this land will be added to the Ojibway Prairie complex to be preserved,” Dilkens said.

The port authority sees the issue differently and has refused any deal that it says doesn’t adequately compensate it.

“They never gave it to us, so I’m not sure why we would give it to them,” Salmons said. “We gave them $3 million worth of property for Ojibway Shores, so why would we then give it back to them for free?”

During the summer, the port authority claimed that it had received an equitable deal that would transfer the property, the first the city had offered in decades. The land the port authority wanted was a smaller plot that was deemed economically viable because of its vicinity to Windsor’s airport.

This city withdrew its proposal the night before the vote was set to take place, a move that Salmons said baffled port officials.

“We thought it was a win for the community, the port, the city, and we are completely at a loss trying to explain the city’s current position,” Salmons said.

The Canadian transportation minister in charge of port operations, Omar Alghabra, has stated that any land transfer must be worked out between the city and port authority, not because of the federal government stepping in, according to Salmons.

Still, Windsor officials say this is an opportunity for the federal government to show its support for the program, saying they hope the beaver logo of Parks Canada will help chew through the remaining red tape.

“From our perspective, having the land brought under the control of Parks Canada gives certainty to people that live here that the federal government means business and that this wasn’t just some election ploy,” Salmons said. “It would be a meaningful sign that this land is going to be preserved for our residents forever.”