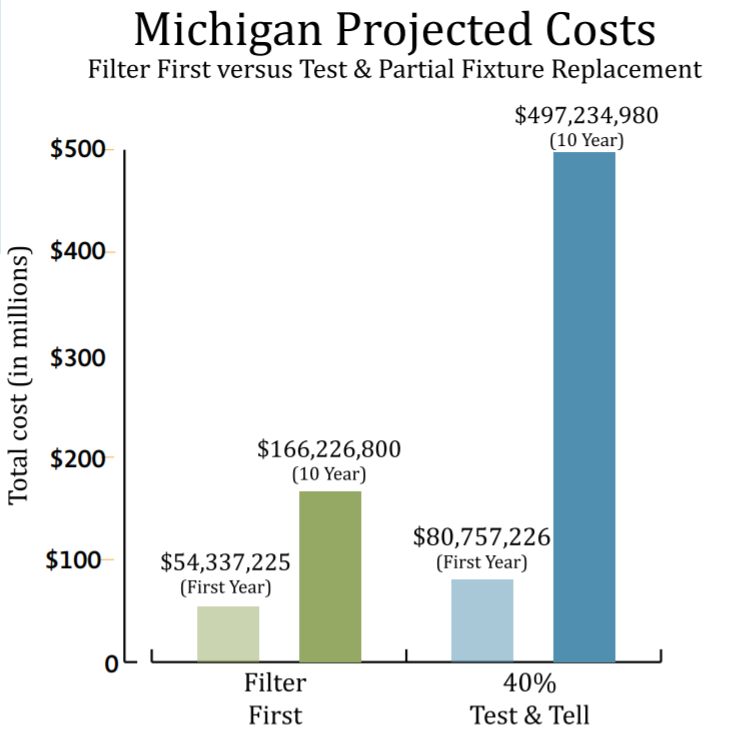 Children’s health advocates are pushing to install drinking water filters in Michigan schools and child care centers to protect them from lead poisoning.

The project, named Filter First, would provide schools with filtration stations that reduce lead in drinking water instead of requiring the costlier periodical testing of water for lead.

The move could cost about $55 million in the first year, said Charlotte Jameson, a water policy program director for the Michigan Environmental Council.

That’s still cheaper than the “test and tell” method that includes testing of all drinking water fixtures and then replacing those that test positive for lead above a set action level, according to the Natural Resources Defense Council and Safe Water Engineering.

Estimating the cost of two approaches to protecting children from water contaminated by lead.

The testing strategy costs about $81 million a year and doesn’t guarantee clean water because lead releases from time to time, Jameson said.

“One school did the testing regime just on their own.” she said. “They got a sample from the water fountain that didn’t contain any lead. Then they went back a month later and tested that same water fountain and it had a very high lead release.”

Other states following the testing approach spend a lot of money going out to test the water in schools, Jameson said.

“We have seen other states doing tests and we learned from them,” she said.

Test and tell is used in 24 states, according to “Governing,”  a publication that reports on and analyzes state policy.

It is expensive and doesn’t guarantee clean water, Jameson said. Filtration is cheaper and provides water free from lead.

The “test and tell” method requires constant testing and money for sampling, analyzing and replacement fixtures with high levels of lead.

Test and tell is a technique that would cost $497 million for Michigan in the first 10 years. That’s much more than the $166 million for filtration strategy even though it requires ongoing costs that include replacing the unit’s filters and sampling water to verify performance, according to the Natural Resources Defense Council and Safe Water Engineering.

“Schools and day cares are meant to be places for children to thrive,” said Becca Maher, the director of strategic campaigns at the Michigan Environmental Council. “But when lead, a harmful neurotoxin, gets into the drinking water of these institutions leached from plumbing, fixtures, and fittings, it presents a grave risk to the development of young bodies and minds.”

It’s unclear how many schools have a lead problem, Maher said. “But given the age of our school building stock and the fact that even fixtures labeled “lead free” still have lead in them, we expect all Michigan schools are at risk of lead leaching into drinking water.”

And the threat is significant, experts say.

“There is no acceptable level of lead for children,” said Larissa Miller, the associate executive director of Nursing and Government Affairs for the Michigan Nurses Association. “Any level of lead exposure is unsafe. Any exposure to lead can cause hearing loss, slow development of teeth and bones.

“Also, it can cause anemia and that’s a lack of adequate hemoglobin,” she said. “That means that kids may not have the oxygen they need to physically run or play or participate in childhood activities. With lead exposure the impacts are permanent and they are lifelong and can’t be reversed.”

The Senate Appropriations Committee is considering allocating $85 million next year for grants to install filters. A package of bills was introduced in the Senate to regulate drinking water standards and filter use in schools and day cares.

If bills pass the legislative process next year, schools will have filtration stations installed by the 2025 school year, Jameson said.