A visitor uses a track chair to access the beach. Unimproved areas are otherwise inaccessible to those in wheelchair. Image: Michigan Department of Natural Resources

Trails that can accommodate strollers, wheelchairs with tank treads and baby changing stations in men’s bathrooms are part of a push to accommodate a surge of new visitors at Michigan state parks.

The parks system has taken an interest in serving new parents, people with physical disabilities and people who live in urban areas of the state, Department of Natural Resources (DNR) officials said.

One reason is that the pandemic sparked an influx of new visitors, according to the agency.

The system saw 35 million visitors in 2020, a 30% increase over the previous year, according to the department.

Pampers, a major diaper manufacturer, is partnering with the department as part of its #LoveTheChange campaign. Pampers says that nine out of 10 fathers have gone into a restroom without a changing station.

“Pampers reached out to us and asked if there was a need in the state parks,” said DNR Fund and Resource Development Coordinator Michelle O’Kelly. “They supplied us 186 units to be distributed over 52 locations.”

O’Kelly says that parks have been receiving the units over the summer and fall and that they should be installed for use by next season because the workload this year has been intense for DNR workers.

“The parks are at capacity,” O’Kelly said. “On weekends that we would normally never fill, we are filling all our parks”

O’Kelly said that she thinks that the large number of people working remotely has been pushing back traditional vacation seasons, so maintenance that would traditionally be done in fall had to be pushed back as well.

The department is also paving miles of trails across the state, a welcome relief for more than just parents, said Jon Spieles, the agency’s interpretative manager. 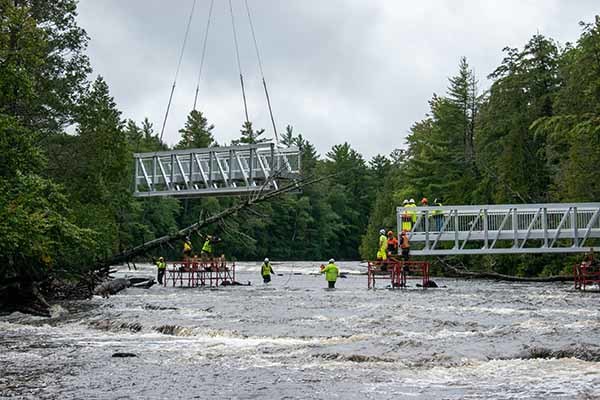 “One of the coolest things about our efforts to improve state parks accessibility is how those improvements work for parents with strollers and all kinds of wheeled equipment.” Spieles said. “The fact is we will all benefit from these great steps forward at one point or another.”

The DNR lists over 30 trails and recreation areas with paved or accessible trails and plans to increase that number. But for areas without paved access, the DNR has also started to provide tracked chairs, which look like wheelchairs equipped with tank treads.

Video of the device provided by the department shows the chairs going over sand, forest floors, tall grass and even deep snow. These chairs are available at nine parks, but officials hope that donations to the program will allow the DNR to provide these chairs to more sites across the state.

Urban residents are the least likely to visit the park system, according to a report by the Dow Sustainability Fellows of the University of Michigan. It cited lack of access to transportation as a major reason that urban Michigan residents don’t take advantage of the state natural areas.

State officials announced this summer the creation of a state park in Flint.

The $26.2 million investment in a former industrial site was targeted to reach people who are disproportionately affected by COVID19.

Spieles, who primarily works with educators and children, says one of the best state parks for kids is in an old Detroit warehouse, not a location typically associated with the great outdoors.

“An opportunity for families and school or youth groups is at the Outdoor Adventure Center in William G. Milliken State Park in Detroit,” Spieles said. “The center provides a taste of Michigan’s great outdoors with hands-on activities, exhibits and simulators.”

The facility includes a multi-story waterfall, a re-creation of a Michigan oak tree and a fishing game, that allows urban park goers to learn about the outdoors and inspires future visits to the actual wilderness.

O’Kelly said that public-private partnerships like the Pampers deal are welcome additions, but most state park initiatives are funded locally.

“It’s all just based on need,” O’Kelly said. “Some of our parks have formal nonprofit ‘friends of the park’ groups. So if a park need a new playground, there is usually a strong (local) campaign to secure funding.”

Officials say that such bottom-up strategies will help the state park system meet the changing needs of visitors in both the short term and for projects in the future.