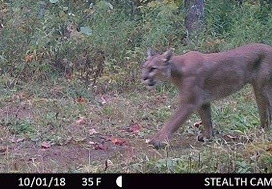 Cougar habitat in North America has been shrinking due to development, land fragmentation and “human-induced mortality,” wildlife researchers warn.

Even so, the future of these alpha predators isn’t all gloom and doom, say scientists who compiled 180 reports of confirmed cougar observations in Michigan, Wisconsin and Minnesota between 2010 and 2020.

Sightings rose during that decade, helped by improved technology such as trail cameras and camera phones, they said.

“Cougars have lost substantial portions of their historical range, yet increased sightings suggest potential for re-establishment in some regions,” researchers from the Michigan, Minnesota and Wisconsin departments of Natural Resources and the State University of New York College of Environmental Science and Forestry wrote in a recent article in the journal “Biological Conservation.”

The Michigan DNR says the last wild cougar known to have been legally hunted in the state was killed near Newberry in 1906.

“The Great Lakes region will likely be an important area for cougar range expansion into the Midwest and Eastern U.S.,” the study said. “Greater understanding of potential distribution and connectivity is necessary to make sound management and policy decisions.

Cougar traffic was apt to move from west to east, the study said. “An individual cougar moving randomly through the study area would be more likely to move through northern Minnesota, northern Wisconsin and the Upper Peninsula of Michigan.”

The goal of their project was to develop a regional map that highlights suitable habitat and connectivity. Their study area was 44% forested and 37% agricultural land, with wetlands, shrublands and developed land accounting for the rest.

The team’s computer modeling mapped 362 linkages – pathways from a half-mile to 3.7 miles long – connecting 191 “core patches” of land, primarily in the northern part of the three states. About half the core patches are in legally protected areas, such as national forests, natural resource management areas and state and local conservation areas.

As for the other half, private landowners should play an essential role in protecting habitat and connectivity, the study said.

Not many years ago, the mere presence of cougars in Michigan was questioned, with reported observations but no scientifically conclusive proof.

“There was a long history of sighting reports” but “they were not only not accepted by the DNR but met with animosity,” said Patrick Rusz, the director of Wildlife Programs at the Michigan Wildlife Conservancy, based in Bath, Michigan. People who claimed to have seen the animals or their tracks “were ridiculed and called crazy.”

Rusz, who did a study of sightings across the state, said, “It wasn’t like a phenomenon that popped up. It had been going on as long as Michigan had been settled. I found to most people’s satisfaction there were cougars out there.”

He said skeptics then shifted their arguments to contend that the sightings were of pets or transitory visitors, but “the problem (with that argument) was that these were resident animals, not wandering around aimlessly. They had core ranges because we found them again and again and again.”

As for the new study, Rusz said he’s skeptical about the relevance of the researchers’ modeling and mapping of connectivity. “It looks good, but whether it has anything to do with the future of cougars or not I tend to question.”

That’s because cougar survival in the Great Lakes region doesn’t depend on pathways and core patches, he continued.

“There’re corridors everywhere. A cougar doesn’t need a corridor. They could care less about that. They do really well around people.

“If our cougars are limited in some way, they’re limited by genetics, not limited by habitat and such. They have a tremendous ability to live in a variety of cover types,” Rusz said. “In the West in deserts, urban areas, plains – anywhere they have something to eat.”

Brian Roell, a Marquette-based wildlife biologist for the Michigan DNR, said the Dakotas are likely the source of Michigan cougars.

He said the Michigan DNR’s cougar team hasn’t identified any females, and “we suspect we don’t have a breeding population.”

He said the team has confirmed at least two observations in the Upper Peninsula so far this year.

Wherever they are, they’re at low density, Roell said, and aren’t expected to have an impact on other wildlife species or farm animals.

“We have not confirmed any depredation from cougars,” he said, adding that there have been no claims by Upper Peninsula farmers for indemnification from the state. A claim in the Lower Peninsula was turned down because the predator turned out not to be a cougar.

Humans pose the biggest challenge to cougars, Roell said. It’s a matter of “social tolerance – will people leave them alone?”