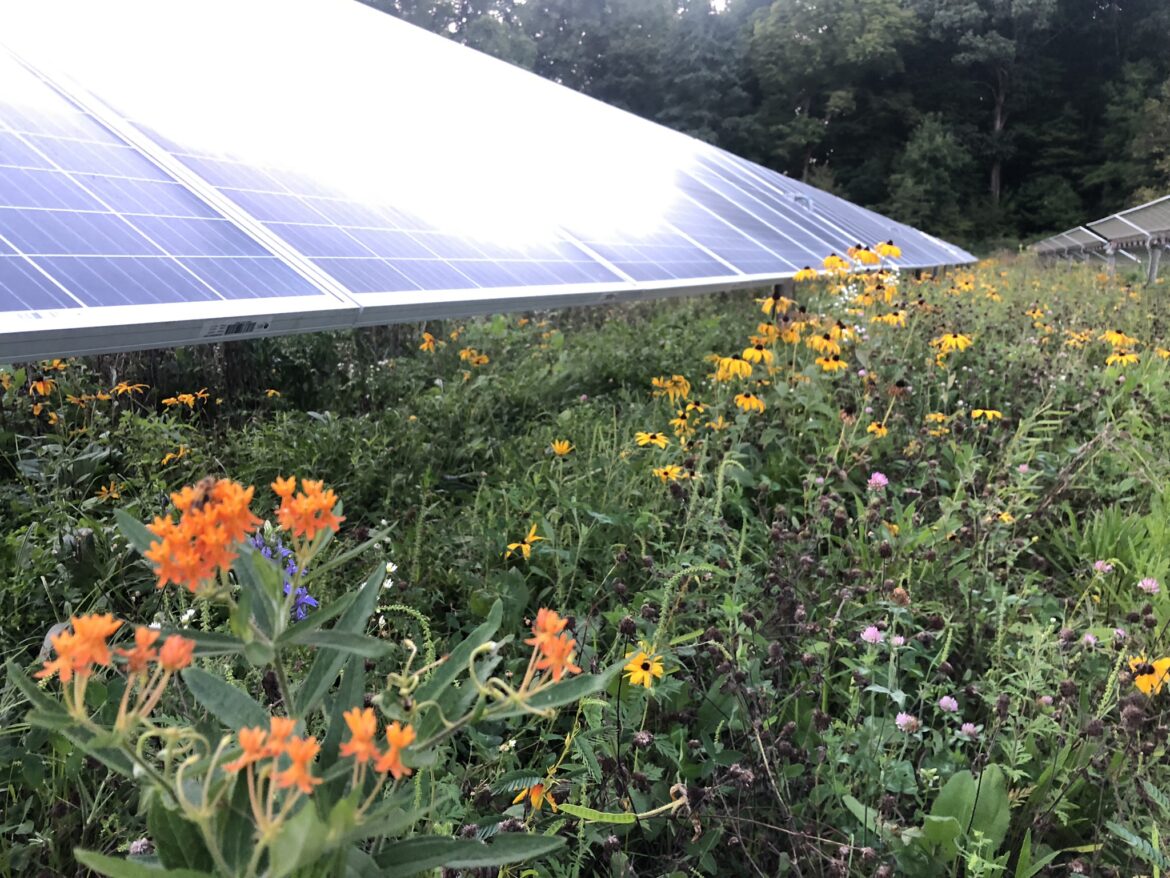 A new report about combining solar power and farming practices has advocates saying the practice could take hold in Michigan, boosting productivity while providing much needed refuge for bees and other pollinators.

The report from The Counter, a news organization covering in-depth stories on food in America, discusses the rising prevalence of “agrivoltaics,” the practice of growing crops underneath solar panels.

The process appears to be a win-win for crops such as tomatoes and jalapenos that respond well to lower light levels, the report said.

That’s because the crop’s natural photosynthesis can provide a slight cooling effect for the solar panels, allowing them to run 1-3% more efficiently.

Similarly, the reduced level of direct light on some crops is extremely beneficial, it said. For example, the productivity of tomatoes grown under solar panels doubled while conserving 65% more water.

Also encompassed in the term agrivoltaics is the use of solar arrays to aid in livestock farming, often using solar panels to provide shade for the animals.

Charles Gould is a bioenergy educator with Michigan State University Extension in West Olive. He says he thinks agrivoltaics could be the future of renewable energy.

“I think that this is the future. Solar requires land, and oftentimes the best for a solar project happens to be land that’s growing crops,” Gould said.

“If we’re going to take land out of production, we need to maximize its value, and the way we can do that is grow crops or raise livestock underneath those solar arrays,” Gould said.

Gould said that there’s a farm in Michigan that uses solar panels to give sheep shade as they graze. 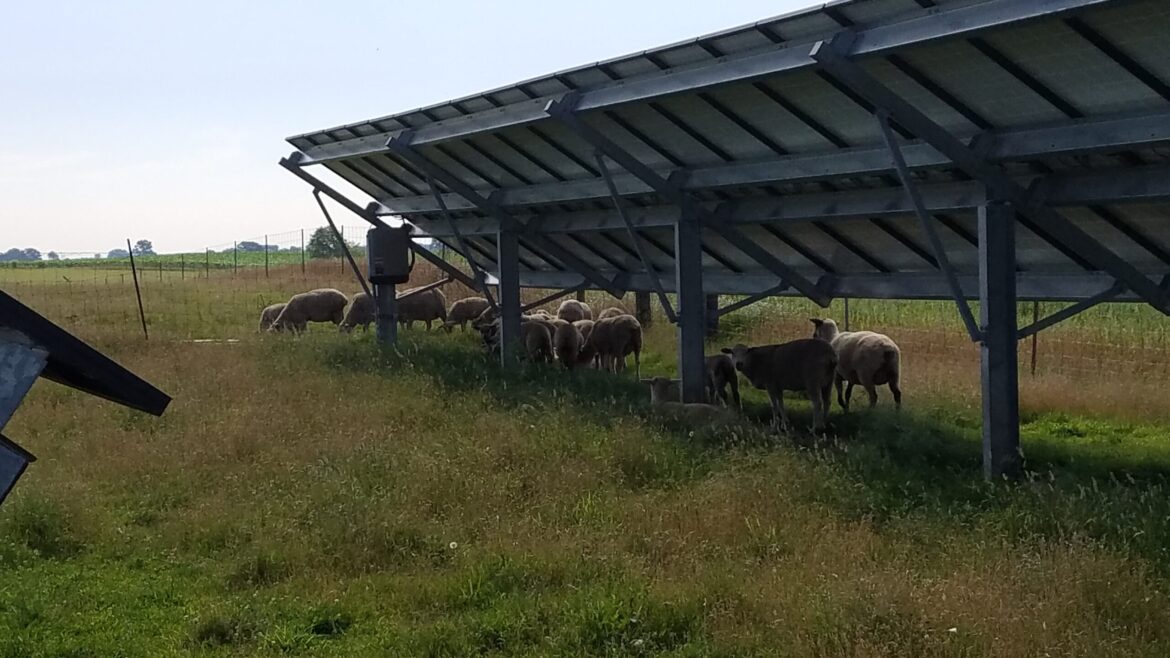 Sheep graze under the shade of solar panels in Lenawee County, an example of agrivoltaics. Image: Charles Gould

“It’s not a question of it happening in the next couple of years, it’s how many years out are we before solar becomes even cheaper and it starts to actually become cost-feasible to do this,” she said.

With agrivoltaics, solar panels often have to be raised off the ground higher than they normally would be.

Moore said the added height of the solar panels sometimes can make the benefits of agrivoltaics economically unrealistic.

“We don’t have great numbers for this, but (raising the solar panels) is going to increase the overall cost by around 9 or 10%, which is a lot in renewable energy where the margins are slim,” she said.

Moore added that the estimate can change a lot, based on scale.

Gould says that the costs may be worth it in the long run, and may be necessary for garnering public support.

“I think what we’re going to see is that there are people who are opposed to solar projects because they are being put in land that’s currently in crop production,” he said.

“I think what we’re going to see is the compromise — the compromise here is that people, like zoning boards and the general public, are going to be more amenable to solar projects if that racking system is raised so that farm machinery and animals can graze comfortably underneath them,” he said. 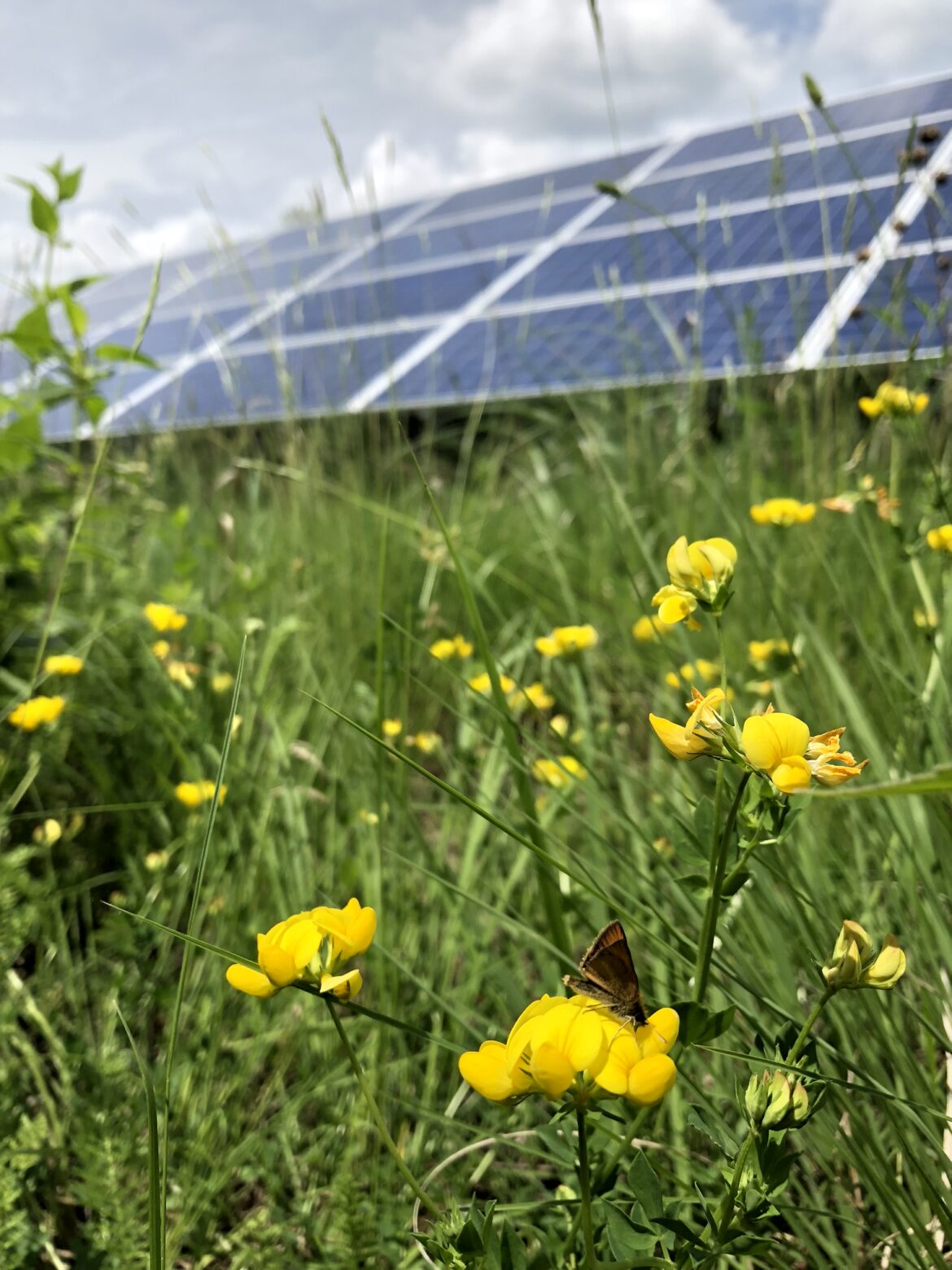 Gould said there would be a tradeoff because the general public will want the land to stay in agriculture, meaning increased costs to raise the solar arrays.

Both Gould and Moore said they see additional promise with pollinator habitats — the practice of turning solar arrays into sustainable habitats for pollinating insects.

And Moore said, “Pollinator habitat is much closer to being feasible than agrivoltaics. What I expect to start happening in the near term, particularly because some of it is being mandated by the Michigan government, is to build pollinator habitat on these solar sites.”