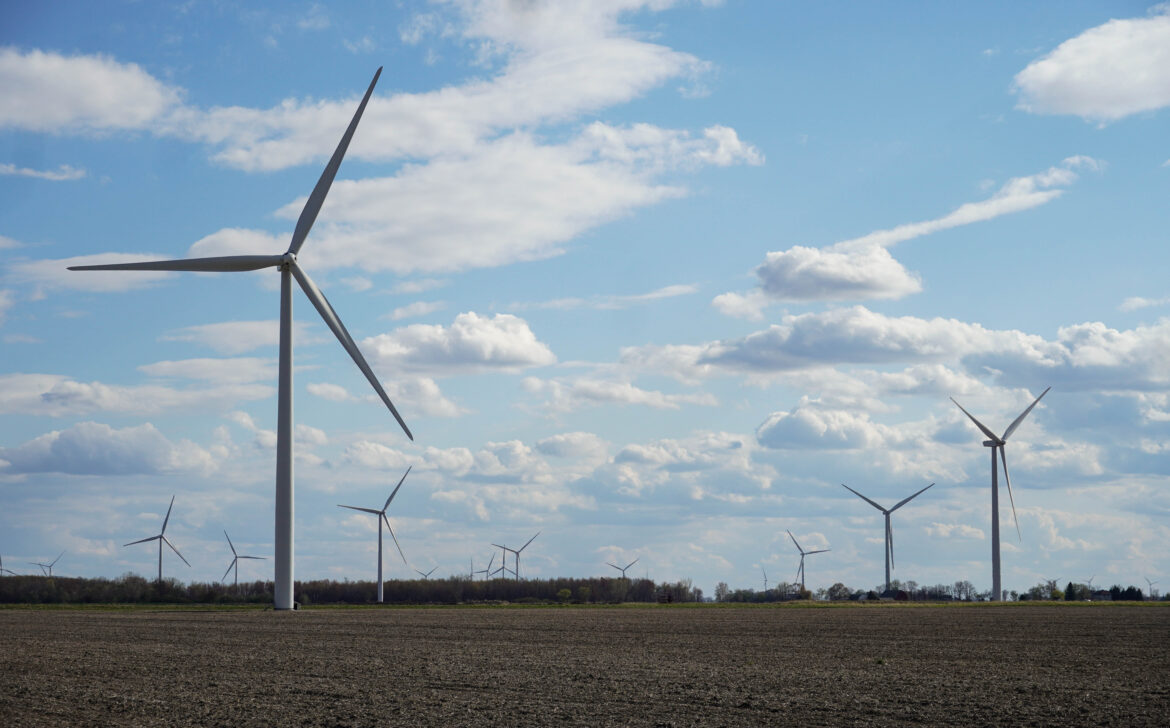 Some of the 75 wind turbines at the onshore Tuscola Bay Wind I farm in Fairgrove, Michigan, near Lake Huron. Image: Taylor Haelterman

Coastal wind is a strong, consistent power source and Michigan’s more than 3,000 miles of coast could provide double the electricity residents used from all sources in 2019.

That’s according to a recent report using data from the National Renewable Energy Laboratory that evaluated the energy potential of offshore winds across the United States. The report was produced by the Environment America Research & Policy Center and Frontier Group, two organizations that provide information on and work to improve the national environment.

The wind off the shores of the Great Lakes could provide electricity for Illinois, Indiana, Michigan, Minnesota, Pennsylvania, Ohio and Wisconsin, the report said. New York was excluded from the Great Lakes region because its offshore energy potential comes from the Atlantic Ocean.

But of all these states, Michigan has the most potential.

Offshore wind could generate three-quarters of Michigan’s predicted electricity use for 2050 with full electrification, according to the report.

Full electrification means switching the state to electric power entirely — from buildings to transportation to industry, said Hannah Read, the co-author of the report.

The next closest Great Lakes state in 2050 coastal power generation potential is Wisconsin at 27%, according to the report.

This potential is technical potential, which means it’s the total energy generation possible from wind in that area. That doesn’t mean all that energy would necessarily be harvested, said Reed who is the Environment America Research & Policy Center’s Go Big on Offshore Wind program associate. 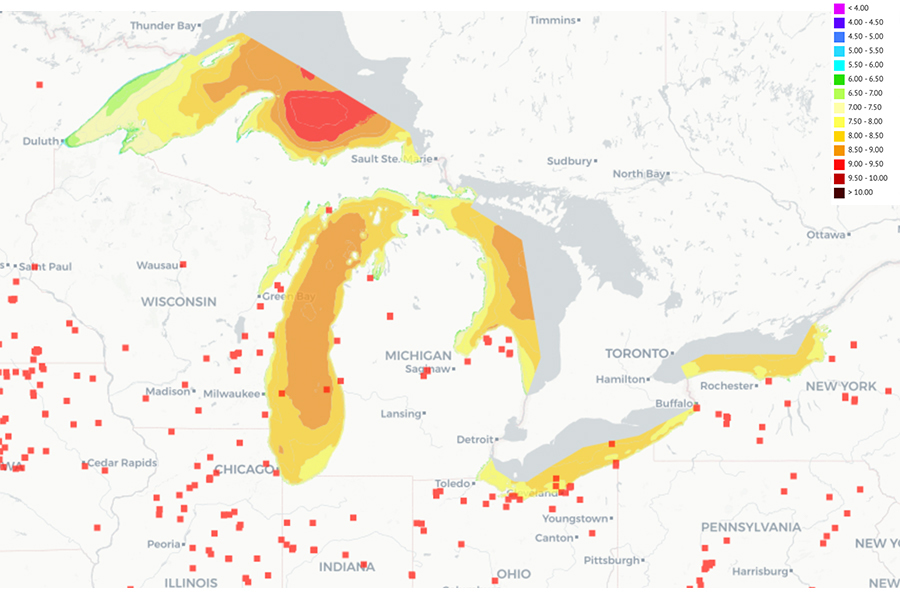 “We say technical potential specifically because it’s just that — it’s potential,” she said. “We’re not necessarily saying that we should develop all this offshore wind. We’re just saying this is what is there, and this is what we could be using.

“We also recognize that with technology improving and becoming even more efficient and powerful, we know that the technical potential could increase in future years.”

The wind power would be generated by turbines that look like giant, three-pronged windmills that can stand on the lakebed or be floating and anchored to it.

The benefit of offshore wind is that it’s strong and consistent making it a reliable option that can generate more power than wind over land, according to the report.

And there’s the benefit that it’s renewable energy.

Of the Great Lakes states, Michigan has the greatest potential for offshore wind energy. New York is not included because its potential comes from the Atlantic Ocean. Image: Environment America

“Instead of relying on dirty fossil fuels you’re transitioning to use clean renewable energy that can power a much cleaner and healthier future for everybody,” Reed said.

But there are some hurdles when it comes to putting wind farms in the Great Lakes. Depending on the lake, there can be limited usable areas, winter ice floes that could damage floating turbines and conflicting uses, she said.

Outside of the technological barriers, two of the largest barriers are community and political acceptance of offshore wind projects because our Great Lakes are important to us, said Dan Scripps, chair of the Michigan Public Service Commission.

It’s important to have conversations about offshore wind development before projects are proposed because the statutes in place for permitting a wind project might not be up to the task and offshore wind farms won’t be a good fit everywhere, Scripps said.

“There’s no silver bullet. There’s no perfect answer. It’s sort of balancing the tradeoffs that you see,” Scripps said. “But I also think that if we’re thoughtful and are willing to have conversations around what are the right spots and what are the wrong spots, for ecological or other reasons, in advance we can build a strategy, whether that’s Michigan or across the Great Lakes, that identifies the places that might be more suitable.”

Having a plan in place will provide a clearer path forward that builds on the people who support offshore wind, he said.

But these struggles don’t mean offshore wind farms in the region are impossible. 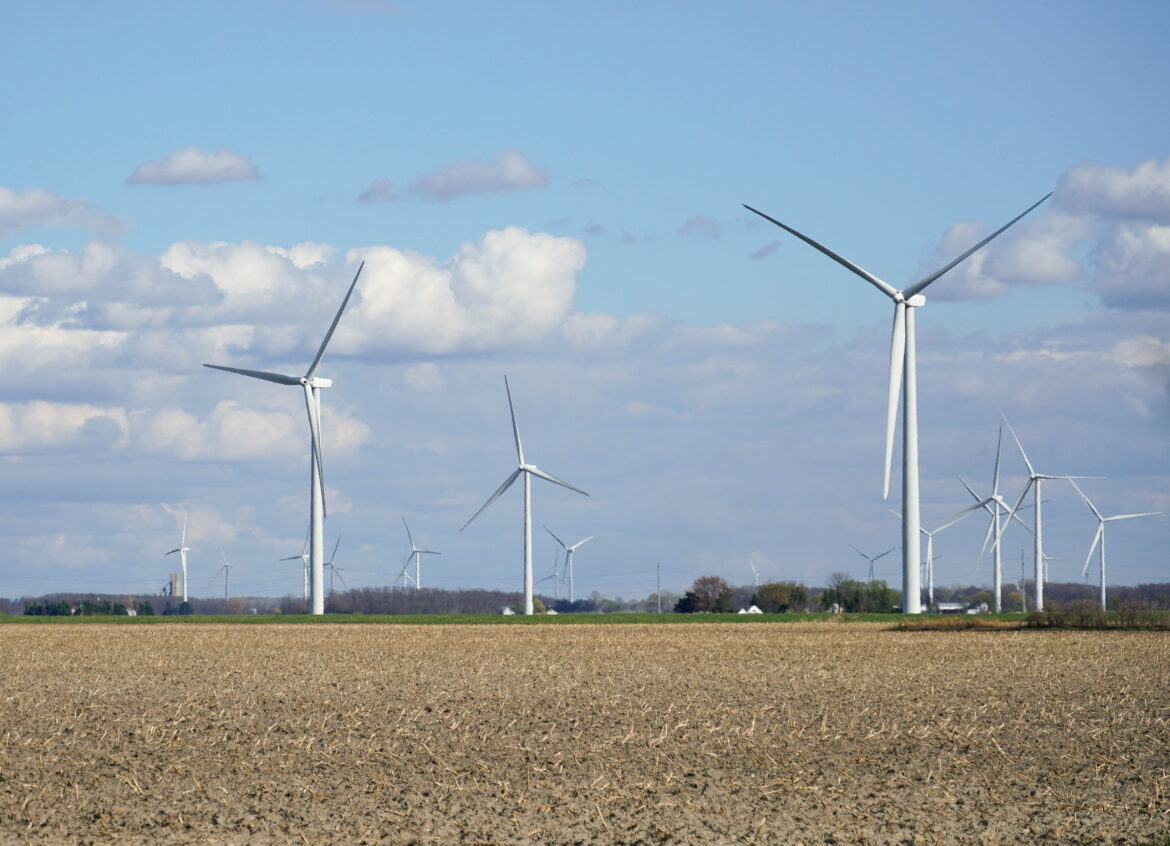 But the six-turbine project faced its own challenges in getting a permit.

In May 2020 the project went on hold for almost a year to battle the Ohio Power Siting Board’s requirement that the turbines be turned off at night for 8 months of the year to protect birds and bats, said Dave Karpinski, the president of the Lake Erie Energy Development Corp.

But after a two-year environmental assessment the U.S. Department of Energy, Army Corps of Engineers and Coast Guard all determined the project would have no significant impact on birds and bats, Karpinski said.

The Icebreaker Wind Project was fully permitted last December with the bird and bat restriction removed.

But the team is waiting for an appeal to the Ohio Supreme Court from two residents of a lakeside community near the project to happen before moving forward, Karpinski said.

The Lake Erie Energy Development Corp. will not develop more wind farms in the future, because it was just an icebreaker project meant to pave the way for others.

“Our vision is that, if this first project can develop, then that will open the door to a competitive market to really come in and let the competitive forces drive down costs and come up with the best solution,” Karpinski said.

It’s been a struggle to get these projects off the ground in the region but there’s hope for the future, Reed said.

“We know that offshore wind in the Great Lakes is poised to take off, it’s just a matter of states making those commitments and being confident enough in the potential,” she said.