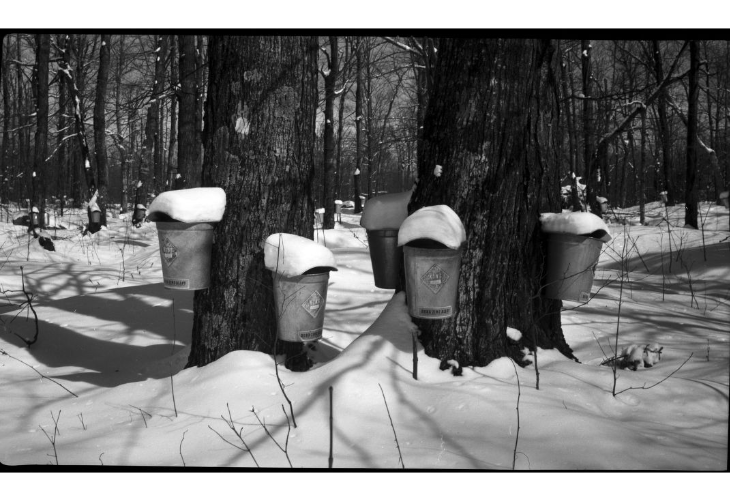 For fans of the third dish, however, there could be trouble ahead: As climate change intensifies, some scientists fear for the future of the North American maple syrup industry.

Canada tops the list of 60 nations that produce and export syrup—accounting for 82.5% of global production during 2019, according to World’s Top Exports.

According to Ray Bonenberg, the treasurer and chair of communications for the Ontario Maple Syrup Producers’ Association, maple cultivators on both sides of the border are impacted by climate change.

“We’re seeing a lot of climatic extremes with temperatures reaching new highs and lows, droughts intensifying and weather patterns becoming more erratic. It’s a stressor to both the trees and ourselves,” he said.

The Canadian government says the vast majority of its syrup comes from Quebec, which produces more than 90% of the country’s supply.Ontario is the second-largest provincial producer.

According to World’s Top Exports, the 2019 syrup revenue for Canada equates to a whopping $324 million in USD—which exceeds America’s revenue tenfold.

Despite recent economic growth, experts have raised concerns about the industry going forward. In the face of climate change, producers may face several challenges.

Sugar maple sap must be harvested during a small interval in the springtime, when conditions are perfect, according to the Marketplace Morning Report,

Due to rising global temperatures, however, the general health of the trees could be jeopardized—threatening both their sap-producing and reproductive cycles.

Within the last half-century, experts have quantified changes in the so-called “maple sugaring season.” Normally, this season falls between February and April.

In addition, there are now fewer freezing-and-thawing cycles to encourage the flow of sap. As the number of cycles decreases, so does the amount of sap produced, the center reported.

Maples also rely on snow to accumulate around their roots, protecting them from freezing in the wintertime. With annual snowfall expected to decrease, however, their root health may be compromised.

Along with rising global temperatures, the National Climate Assessment reported a rise in the number of extreme weather events such as heat waves, tornadoes, severe hurricanes and other storms.

As the frequency of severe weather events has increased, their intensity has also grown. Since 2000, multiple disasters have individually cost the United States several billion dollars in damages, the National Climate Assessment said.

According to Bonenburg, who has produced syrup in Ontario for nearly 50 years, these climatic shifts have created new challenges for producers.

“The drastic temperature changes result in atypical freezing-and-thawing cycles, which makes sap irregularly. From just one day to the next, it’s impossible to predict whether my sap storage tanks will be bone-dry or overflowing,” he said.

Another difficulty, Bonenburg said, is adapting to a sugaring season that begins slightly earlier each year.

“During most of my career, tree-trapping started in late March and went through April. Recently, though, lots of producers have moved their tapping into February or January,” Bonenburg said.

According to the University of Vermont’s Proctor Maple Research Center, the average sugaring season in Vermont now begins 8.3 days earlier and ends 11.6 days earlier than 50 years ago. The center’s Timothy Perkins said, “We’ve looked at the timing of tapping historically, and there’s been a significant shift in the average start and end dates of production.

“The season continues to shift earlier in the calendar year and, for a while, there was a reduction in the length of the season,” he said.

According to Dartmouth College, by 2100, the North American sugaring season is expected to begin an entire month earlier than it had over the previous half-century.

During this time, the college reports, maple syrup production is expected to decline throughout the northeastern United States and into southern Canada.

Perkins said, “We’ve developed methods that have proven successful in offsetting the losses of a truncated sugaring season. Mainly, these are sanitation practices which are implemented to keep the tap-hole and sap-collecting equipment clean.”

According to Perkins, these novel sanitation processes help keep tap-holes in the trees healthier, which allows sap to flow longer. Combined with earlier tapping, such methods can increase the syrup yield.

“Thus far, our work has managed to offset the impacts of climate change in shortening the duration of the season. Looking forward, it’s important that we keep finding ways to mitigate the new challenges in maple sugaring,” Perkins said.

According to Bonenberg of the Ontario Maple Syrup Producers’ Association, such ingenuity and adaptability will be crucial for producers in the future.

“With ongoing climatic and environmental changes, unpredictability has become the greatest challenge for us in the industry,” he said.

Going forward, he explained, it will be crucial for producers to be alert and proactive in their efforts.

“It’s imperative that we ‘understand, mitigate and adapt’. We need to stay aware of climate change, work toward mitigating its effects and be able to adapt to the changes it’s caused. That’s how this industry is going to survive,” Bonenberg said.