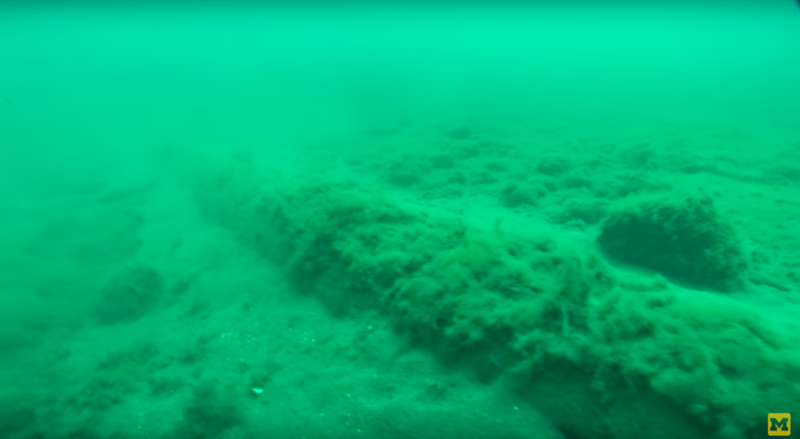 The Line 5 twin oil pipelines run underneath the Straits of Mackinac. Image: University of Michigan

After an unknown incident caused Enbridge Energy to shut down the east leg of Line 5 last week, Attorney General Dana Nessel has requested that the entire pipeline be temporarily shut down until the damage is investigated further.

Enbridge briefly shut down both legs of Line 5 this weekend after the damage was discovered during an annual inspection.  But on Saturday, they resumed normal operations of the west leg without any discussion with the State.

The issue has to do with “significant damage” to one of the anchors that keeps the pipeline secured to the bottom of the lake. According to Enbridge, it’s just 150 feet away from an area of the pipeline that was damaged in May.

But the cause and extent of the damage remains a mystery.

Line 5 is 67 years old and carries nearly 23 million gallons of oil every day through the Straits of Mackinac.

Governor Whitmer wrote to Al Monaco, CEO of Enbridge, on Friday, asking that he provide all known information about the incident to the State by Monday.  Attorney General Dana Nessel said those reports contained little content, few pictures, and left several critical questions unanswered, including the cause of the damage.

“It is evident by the pictures we’ve seen that there has been significant damage to an anchor support on the east leg of the pipeline. To date, Enbridge has provided no explanation of what caused this damage and a woefully insufficient explanation of the current condition and safety of the pipeline as a result of this damage,” she said in a statement. “We cannot rely on Enbridge to act in the best interests of the people of this State so I am compelled to ask the Court to order them to.”

“There’s a pattern and practice from Enbridge of deceiving authorities and the public as far as this pipeline goes, and this latest irresponsible move of turning the pipeline back on when they haven’t even uncovered the source of the damage is a bridge too far,” said Sean McBrearty, with the environmental organization Oil and Water Don’t Mix.

“Enough is enough for running this pipeline,” he said.

“Enbridge resumed operation of the pipeline through the Straits of Mackinac without any explanation of the cause for the damage to the pipeline structure or plan to prevent it from happening again. Moreover, Enbridge has not timely complied with the state’s request for full and complete information and resumed operation without even consultation,” the Governor said in a press release.

In a statement, Enbridge said they have confirmed that there’s no issues with the anchors on the west leg, but they will keep the east leg shut down until further notice.