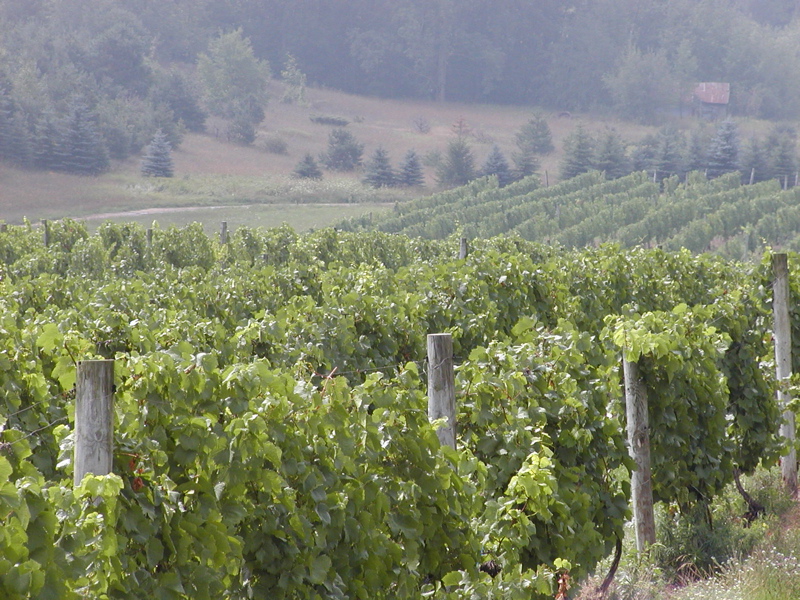 Michigan’s wine industry generates $2.1 billion in direct annual economic activity and over 27,930 jobs, according to a report for the Michigan Craft Beverage Council, with a $5.4 billion overall impact.

Wine quality is hugely sensitive to changes in the weather, with sudden frosts “lulling the plants into a false sense of security,” according to Peter Laing, the operations manager of Mawby Vineyards and Winery.

However, unexpected frost isn’t the biggest climate-related worry facing wineries in the state.

“The pest pressure is the most notable,” Laing said. “More wet, warm weather means a tougher fungal pressure, and warmer weather extends the range of more pests and heightens activity from native insects.”

In the warmer months, yellowjackets are predators that consume other insects. When the weather gets colder, they switch to eating the sugary grapes.

As the temperature increases and the weather gets wetter, pests like yellowjackets can survive more readily, according to Nikki Rothwell of the Northwest Michigan Horticultural Research Center near Traverse City.

They’re hardy and hard to catch, and many wineries are trying combinations of control approaches, called integrated pest management. These include inspecting fields for pests prior to planting and canopy management.

“There’s always insecticides, new fungicides, but we try to use other techniques to combat pests as much as possible,” Laing said. “There’s never a silver bullet — it’s a combination of approaches.”

Climate change is expected to harm the wine industry by reducing crop yields, but increasing crop diversity can help stop some of the potential damage, according to a new international study.

“It’s the winter that really damages our wine grapes,” Rothwell said. “What we rely on, since we’re up here in the 45th parallel, is snow cover. That hasn’t always been reliable.

“We think that it is the implication of climate change, that we don’t have the real reliable snowfall that we used to,” she said.

“We used to have these big, beautiful snowfalls, and all these wine grapes would be tucked in nice and cozy for the winter,” she said. “We’ve lost a lot of snow since it’s getting warmer, and anything above the snowline is susceptible to winter injury.”

Vinifera varieties, like chardonnay and Riesling, make up nearly 65 percent of Michigan’s wine grapes, according to the Vineyard Mapping for Michigan study by the Michigan State University’s  College of Agriculture and Natural Resources.

French hybrids struggle to survive in the long term because the grape originated in the warmer regions of Europe, according to the mapping study.

American hybrids, or concord grapes, are much less popular but more winter-hearty.

A hybrid mix of the two is becoming more popular, Rothwell said.
Laing said other tactics to protect and strengthen wine grapes include placing heaters in the vineyard and using sprinklers to keep the temperature above freezing during sudden frosts.

While weather can be predicted, accurately predicting future shifts in climate is difficult.

“It’s a major variable, an unknown,” Laing said. “We are trying to do as much as we can to be ready to handle whatever gets thrown at us.”

“Different pests are not what you’d think of with climate change — you think of weather — but there’s all these other things that go along with that,” he said.

This story was updated on Feb. 12 2020, to correct an attribution and to clarify the economic impact of the wine industry in Michigan.